There's more from Barry from our sail with the schooners, both still and video. 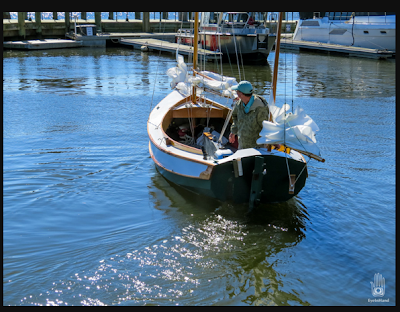 You will notice right away in the video that Barry likes to experiment, in this case shooting video and stills with his camera out on a monopod.  That opening scene of him walking by the schooners is very nicely done, you would think a videographer was walking with him using a steady cam.  But no, it's just Barry being creative.  He also uses the monopod to get some nice bow shots of Spartina, and even overhead views while under sail.

We had steady wind with strong gusts buried in the breeze.  We could see the gusts coming - for the most part - barreling up the river.  I think we had full sails up for just a short while, then tucked in a reef.  My favorite part of the video comes at 8:47.  Another favorite scene comes later where we sail by the Virginia and hear the music from the festival in Town Point Park.  Repeating the 8:47 scene in slow motion is a nice touch. 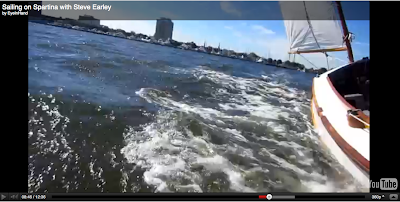 I will say that Barry put together a video that gives the feel of a typical day sail aboard Spartina on the Elizabeth River.  The sights, the sounds, that is exactly what I enjoy during a nice day on the water.  The one thing that does not come across in the video is conversation.  You might get the feeling that Barry and I were not on speaking terms that day.  But really we did have some enjoyable conversations - about sailing, work, technology, family and seafood (he left Spartina and drove directly to my shellfish guy Uncle Chuck).  I think while he was experimenting with his camera I was focused on watching for the wind gusts - which I did with success save for one or two occasions (i.e. 8:47).

Thanks for the video, Barry.

I thought you were getting ready to "bury the rail" there at 8:47. But, you-all were flyin'.

Needless to say, I'm jealous of your "speed over ground". Our boats are about the same LWL, but "Alert" probably carries a half a ton more weight (including me), and an 8' beam, so 6 to 7 knots is flyin' for me.

Was Barry using a video camera or a DSLR with video feature on the monopod?

I'll get over the jealousy.

I think it was both an slr - on the boat - and a waterproof (thankfully) point and shoot on the monopod.