I wake in the middle of the night.  Rain, sometimes heavy rain.  I reach outside the bivy and touch the corner of the bunk flat where water collect.  It is dry.  The tent works. 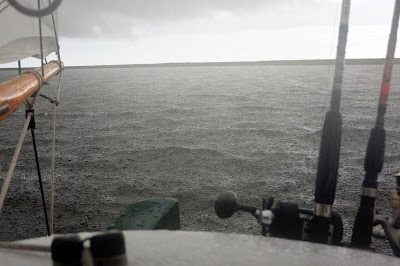 Awake at 6:00.  Dark clouds to the south and some patches of blue to the north.  I tuck away the sleeping gear but the tent is still in place as a rainstorm moves in.  I lean back in the cockpit and nap, waiting for the rain to move on. 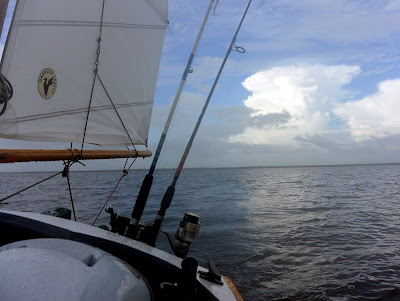 We sail off anchor just after 8:00, making just over 2 mh down Merkle Bay as low grey clouds slide overhead.  The clouds to the south break and I see a towering thunderstorm though I can't tell which way it is moving.  Typically our storms move west to east, but with a Tropical storm in the area all bests are off.  The clouds move in again.  The sun breaks through at 9:00, making 5 mh NNW on West Bay. 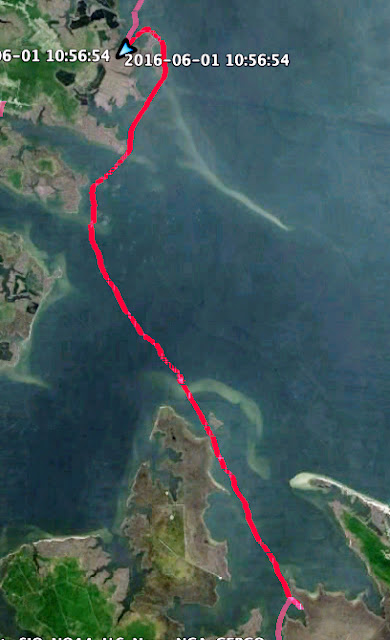 Dark clouds slide up from the south and suddenly there is the cold outflow of air from a coming storm.  Glancing at the gps I see there is no protection nearby.  The bay is calm so I keep sailing as the rain begins to fall and the winds pick up.  All sails up, there isn't time to reef, and the gps shows 8.9 mh, a record I think, as the squall pushes from the stern.  The chart shows the nearest protection a couple of miles away at Henry Hills Harbor.  I decide to round up once I get there, but after 20 minutes of rain and wind the storm passes me by.  In the calm I bail out Spartina. 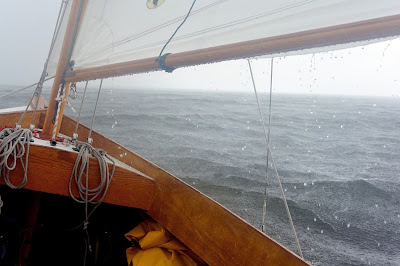 Steady wind and calm sailing out of the bay and into the narrows behind Racoon Island.  Looking southwest I see another storm coming so round up to tuck in a reef.   Preoccupied with watching the storms I forget about the shoals at Point of Marsh until I feel the center board bounce across the first shoal and then the second, plenty of wind on the beam to push us across the sand and mud shallows.  I tie in a second reef to cross the Neuse River toward Bay Point just below Jones Bay.  The wind comes and then goes, I shake out the second reef.  Spartina rolls and heels in the rough water of the Neuse River.  I watch a storm on the far side of the river slide from south the north and it misses us as we approach Bay Point. 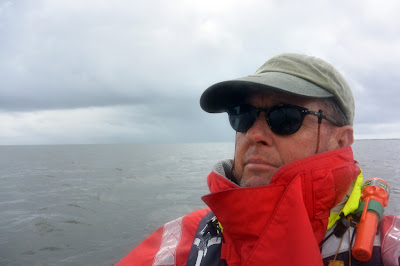 I sail too far into the shallows off Bay Point and the waves build as does the wind.  I go forward to tuck in a reef.  Spartina rounds up and wallows as a wave comes and from the starboard side I see I am looking straight down over the port side into the water.  I decide quickly I don't need the main at all, drop the gaff and wrap the main tightly around the boom. We turn north under mizzen and jib and 5.5 mh. 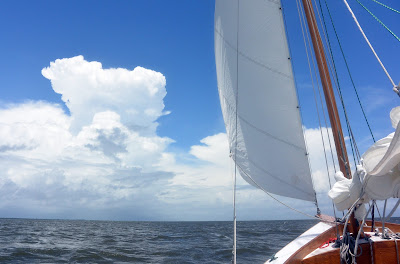 We follow the shore up Pamlico Sound.  Sow Island Point, Middle Bay Point, and before Big Porpoise Point the clouds part and we have blue skies.  The afternoon wind is getting stronger and I drop the mizzen, 5 mh under jib alone as we round Little Porpoise Pount and Sound Point, then cut across Mouse Harbor to Soundward Bay. 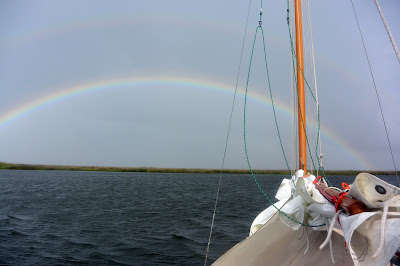