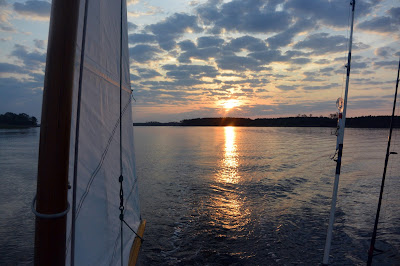 Awake before first light, the symphony of the marsh has slipped away during the night.  Calm with broken clouds.  Dew covered decks and a few mosquitoes which disappear quickly.  Under power by 6:00, and looking down the creek to the ICW I see several power boats heading south. 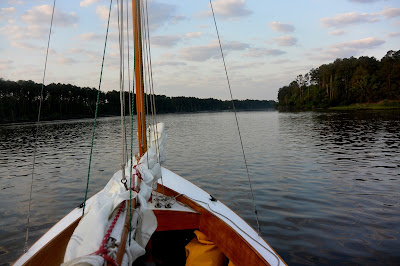 Down Adams Creek and then the canal under power at 6.6 mh with a helping tide.  Just after 7:00 we slide below the high-rise bridge, the water swirling with eddies port and starboard and I began to feel the heat of the morning sun as it reaches over the trees.  To the south a flag flutters at a marina and reveals a light but steady west wind. 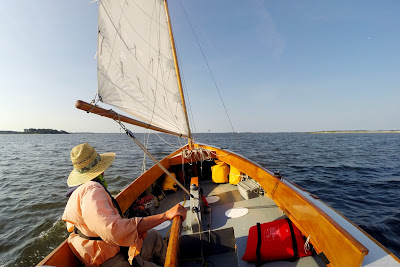 We round up and set full sail at 7:40, 5.2 mh as we slip out onto the Newport River, red markers to the right showing the path through the shoals. 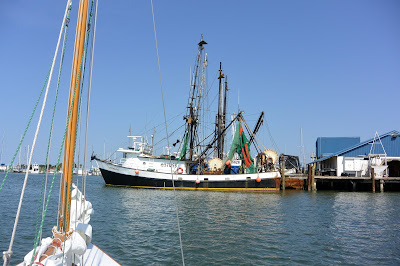 A fine breeze carries us down behind the Newport Marshes, the approaching low tide revealing mud flats to the west.  One of the most pleasant of sails, Spartina heels slightly and makes steady progress towards Beaufort.  Larger boats take a deep channel to the west and I am happy to be sailing alone on the narrower channel. 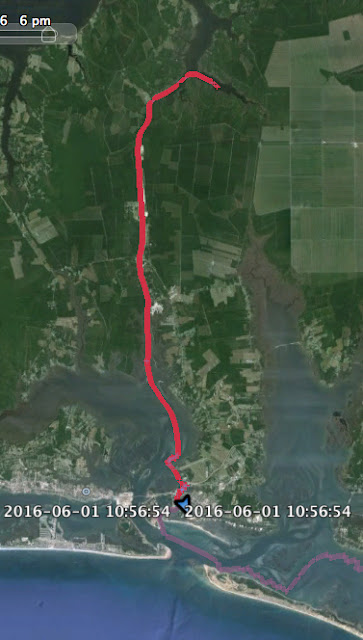 Tacking to the west to reach Gallant Channel the gps beeps and the batteries die.  Not wanting to lose track of the shoals or my waypoints I make a few wasted tacks back and forth across the skinny water as I replace the two lithium batteries.  With the gps up and running again we round the point and make our way beneath the construction of a new high-rise bridge into Beaufort. 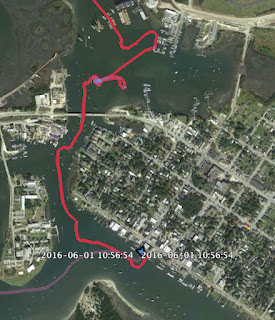 Try as I might I cannot recall a fuel station on the Beaufort waterfront.  I would like to top off the gas can and a marina on the backside of Beaufort shows fuel prices.  I dock and top off the can, less than a half gallon, then motor toward the draw bridge which I see is opening to let a shrimp boat come through.  I make three calls on the vhf radio to the bridge tender to see if I can make the lift but get no response.  I look at the radio and see the batteries are down to zero, enough power that I can hear the bridge tender and shrimper, not enough power to transmit.  I change out the batteries and make contact with the tender just as the bridge begins to close.  "Sorry, Hon, you'll have to wait until the 10:00 lift."  Less than 30 minutes to wait, I motor over behind a marker and drop the anchor.  At 10:00, and not a minute sooner, we pass through the lift bridge, and looking back at the new high rise I suspect it will be the last time I talk to that bridge tender.

At tie up at the usual spot in Beaufort, the west floating dock where they like to keep the smaller transients.  At the end of the dock in a megayacht with a very loud, bored crew that apparently likes to hear themselves talk.  No matter, I think.  It's a nice day on the waterfront, a run to the general store for supplies, lunch at the Dockhouse Restaurant overlooking Taylor Creek, then an afternoon walk through town and sitting at a waterfront table at the Finz Grill to write in my journal and send emails home.  Dinner at the Dockhouse Restaurant, using my two wooden nickels for draft beers, and and another walk.  I come back to Spartina to see the beautiful schooner "When and If," built for General George Patton and perfectly maintained, arrive at a neighboring dock for the night. 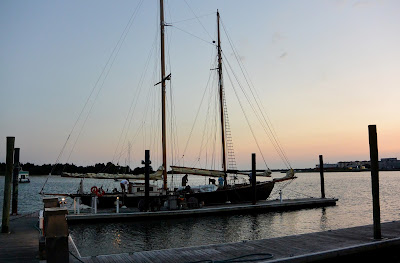 Boom tent up for privacy I slip into the bivy.  The loud crew from the megayacht comes back to the dock after dinner and a few (maybe too many) drinks and the loud conversation wakes me.  Some of it was about me, "Can you see him in there?" a young lady asks.  The conversation continues and I drift off to sleep while the crew drifts off to another bar.  Later I wake again as the crew returns talking loudly, much too loudly, about nothing.  I drift off to sleep again.

Enjoying the trip report and pictures.

Saw the "When and If" in New York a few summers ago. She was in the C&S canal which leads to the Erie canal. Beautiful schooner.

That is a beautiful schooner. I had seen her a couple of times earlier on Great Chesapeake Bay Schooner Races.