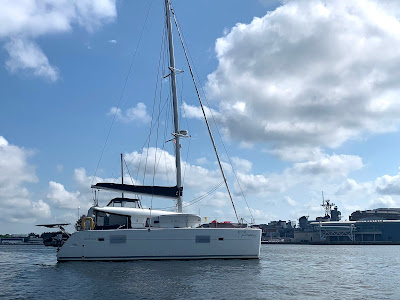 Craford Bay had an international air today, with boats from Sydney, Australia, Richards Bay, South Africa and Hamburg, Germany anchored there.  In the spring we get boats from the Atlantic coast heading north to New England or Canada, in the fall we get the same boats heading south to anywhere from North Carolina to Florida, the Bahamas or the Caribbean.  Summer often brings the circumnavigators who, after spending time in the Caribbean, come north to wait out the hurricane season.  On the catamaran out of Sydney named "NO PLANS, just options," above, I saw a man and a woman, a young boy and a miniature dachshund.  They said they were circumnavigating, now headed towards home. 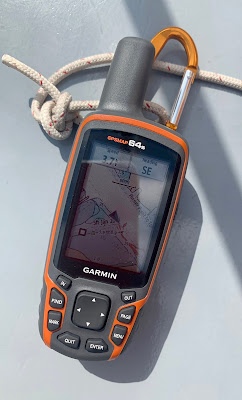 I brought along the new Garmin GPS today, mostly to create a track to see if I can send that track to my phone.  The GPS has blue tooth capabilities.  I've downloaded there app to my phone and the literature indicates I can have text messages from my phone show up on the GPS screen (though I don't think I want that to happen).  The booklet says the unit can transmit tracks to other GPS devices.  I want to see if I can also send to my phone, which would be useful to me. 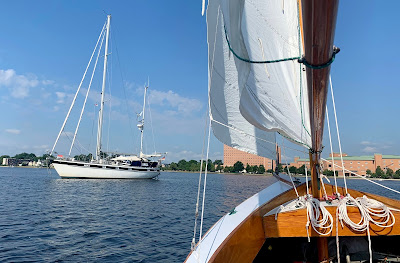 There is the boat out of Hamburg, above, I did not talk to the man on board, we just exchanged waves.  The cruiser out of Richards Bay had a couple on board that left South Africa about two years ago.  They spent time in Brazil and the Caribbean, coming up here to avoid the hurricanes.  After hurricane season they will sail to Panama to take the canal into the Pacific.

Weather was an unexpected delight, cooler and drier than expected, with more wind than what was forecast.  Tomorrow I expect lighter winds, maybe more humidity.  We'll see.

Next time please ask Akka's skipper if he just came from Aruba... I think i recognize her from a few weeks ago.

The cat has possibly been spotted in Kralendijk Bonaire the 13th of June...

I'll ask if I see them again. I would not doubt that they were down your way. steve