a lap around the lighthouse 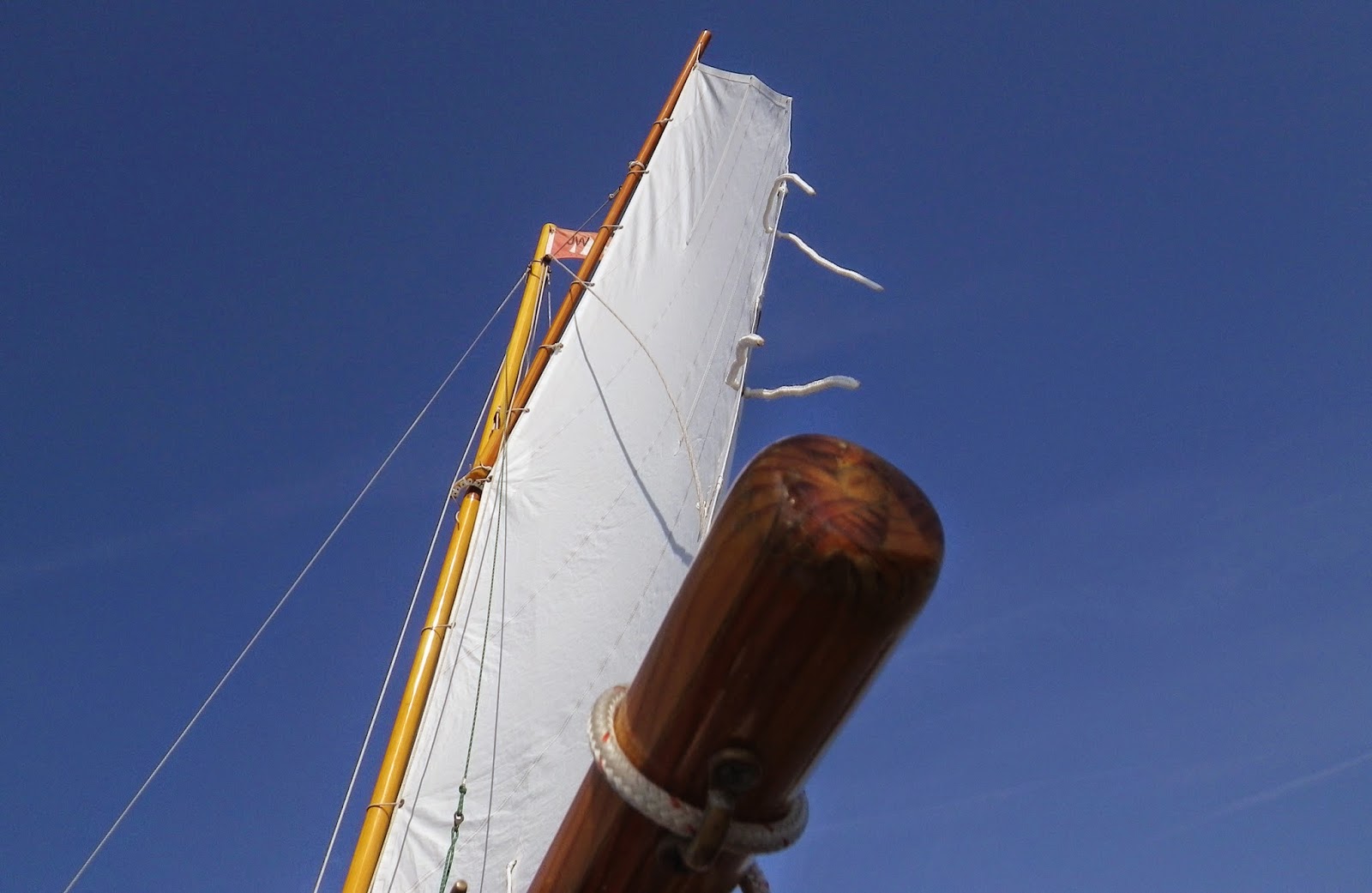 It was a rare wind yesterday coming directly out of the south, bringing with it warm air and pushing Spartina downriver with the running tide.  In the wind shadow downtown I raised full sail, soon to tuck in a reef out on the open river.  Six knots and blue skies. 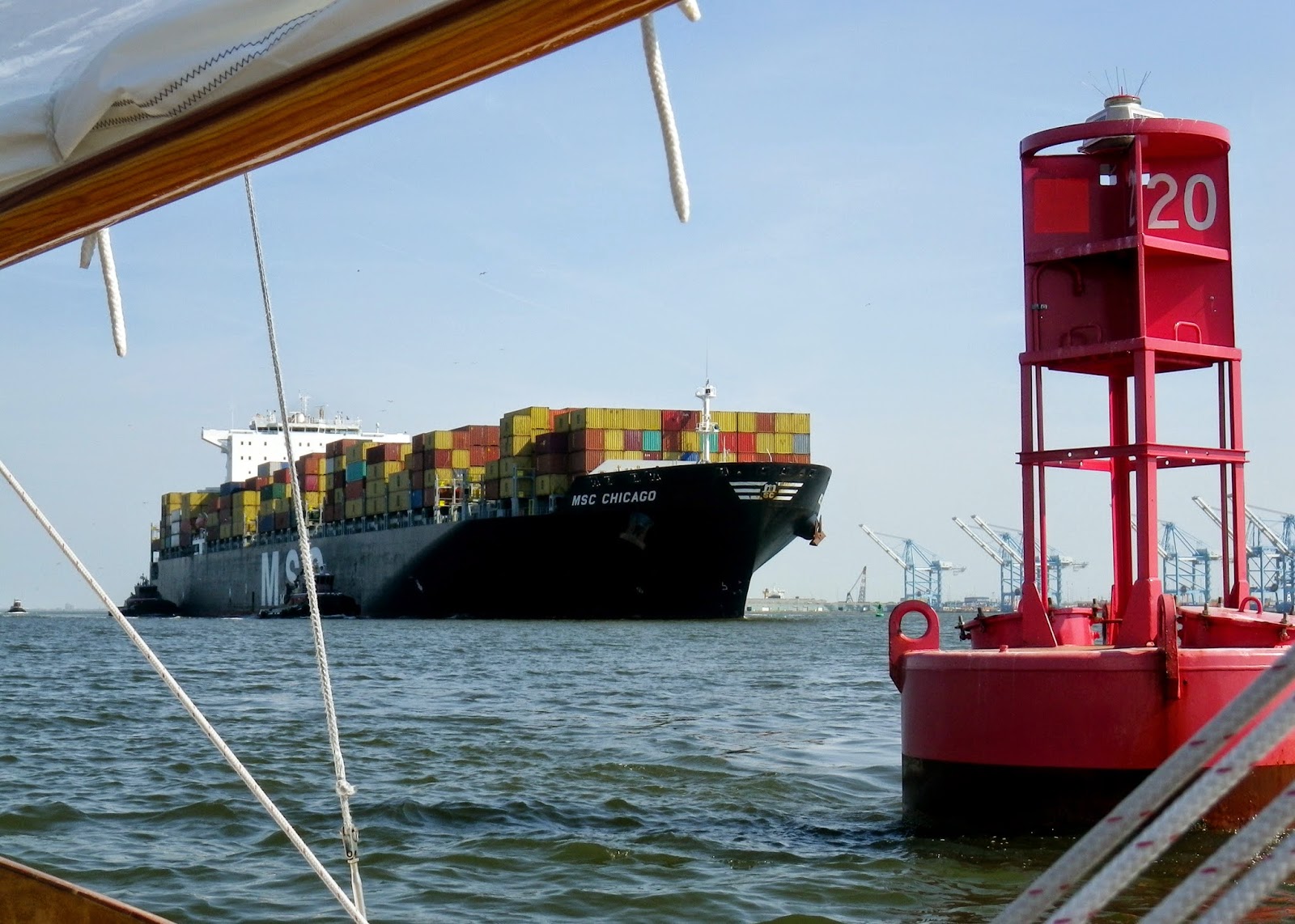 A freighter passed us to port, then we crossed the channel before passing a larger container ship on our starboard.  Ospreys circled above and cormorants poked their heads up out of the water. 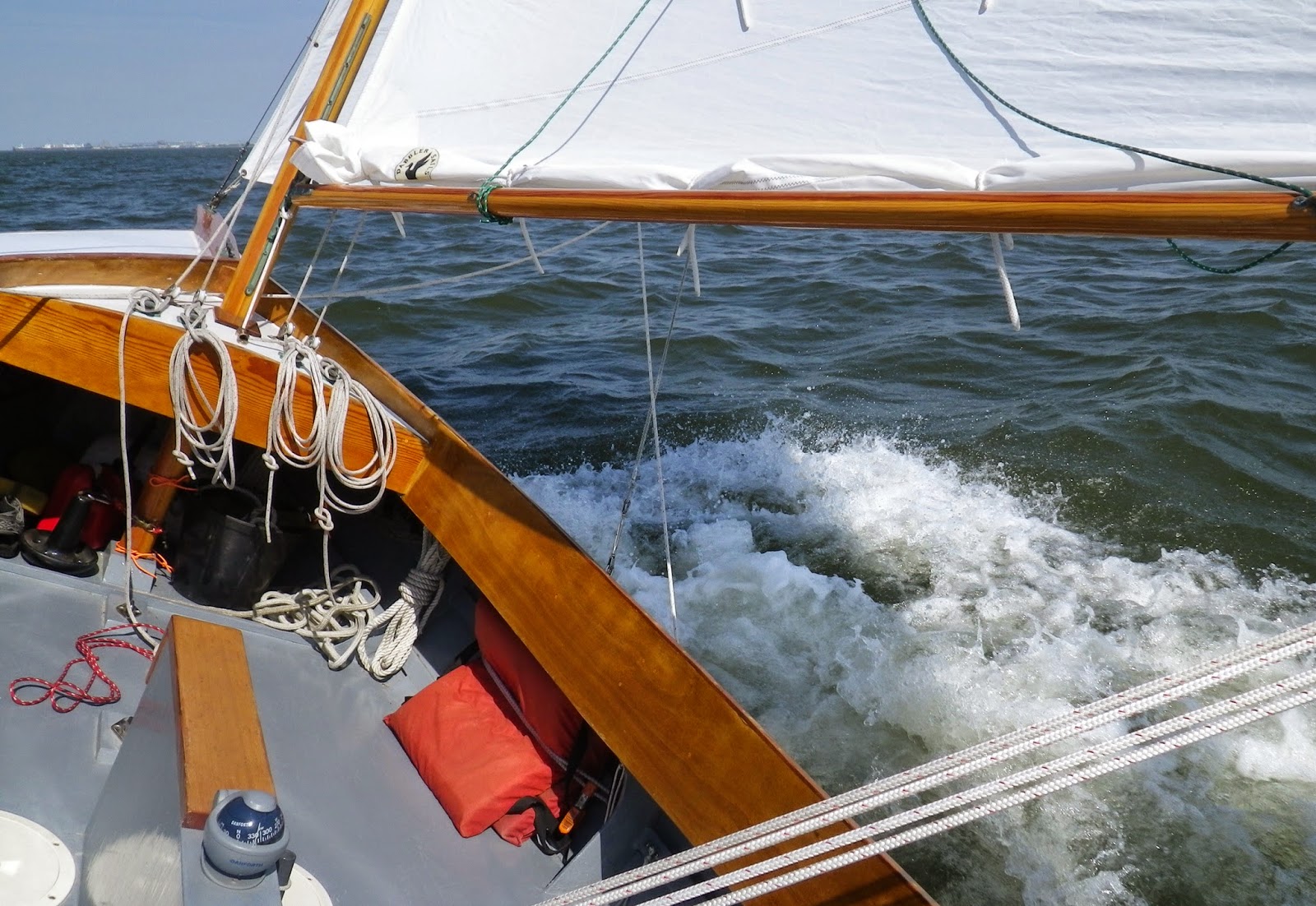 Rounding the northeast corner of Craney Island where the Elizabeth River meets the James the gusts  picked up and Spartina heeled, making almost seven knots at times.  There was a chill in the air from the still cold water of the James. 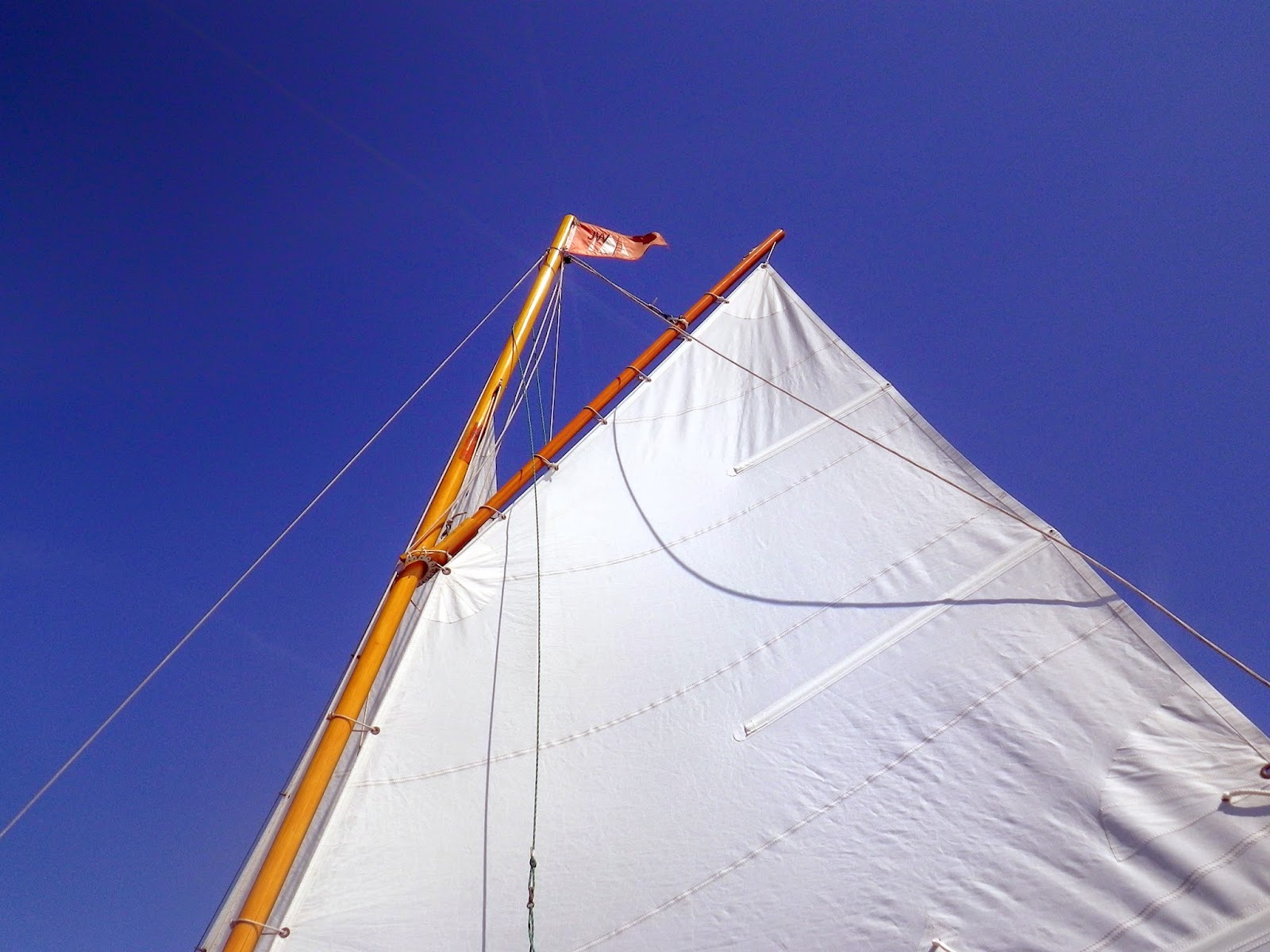 A radio brought along to listen to baseball stayed in the duffle bag, the wind was all I needed to hear.  A cellophane-wrapped sandwich from a grocery store, better than expected, made for a nice lunch.  Two tacks up the river and we  circled around Middle Ground Light, built in 1890 and now privately owned as a weekend home.  Wouldn't I love to spend a weekend there. 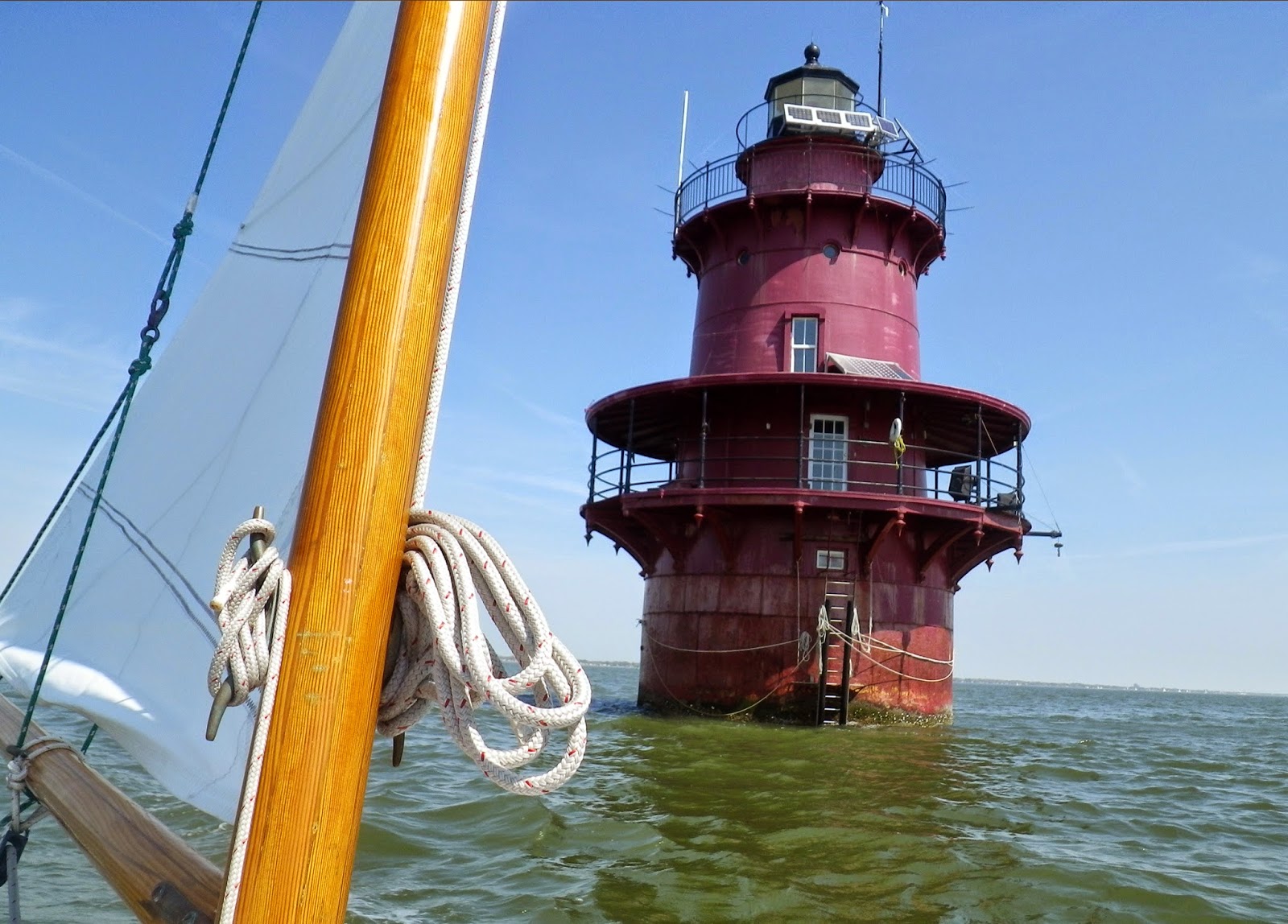 Back to the gusty corner of Craney Island, back into the Elizabeth to find, for a short while, lighter winds and a return to full sail.  A last tack to get around the coal yards at Lamberts Bend and the afternoon gusts appeared as the first batch of snowbirds passed by on their way north.  Spartina is reefed once again, sailing into the wind and tide up Town Point Reach and back to the ramp.

Sun, wind, 80 degrees and a running tide - can't ask for much more than that.

We must have just missed you. Anchored off Hospital point late that afternoon. Elected to head back the following morning despite the gales as they were predicted to shift (and did) from south to north. Was much colder and windier that night. We ran up the East River off the Mobjack as far as possible that night. Glad we did. Boy did it howl! There's not much protection in Norfolk harbor from the north. Saw your grounded tanker post too. 70 mph?! I had no idea the winds had hit that high. Glad our anchor held.
Mon-DAY was good sailing though. Sorry I missed seeing you and your boat.
-EB

Sorry I missed you. I was back at the ramp by 4 I think, I've got cooking duties on Sunday evenings.