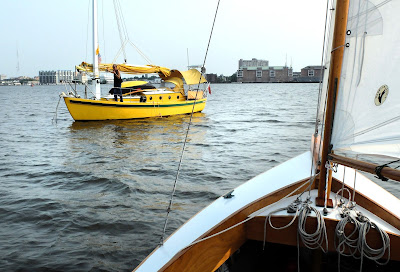 Seen from a distance, the orange yellow color gave her away as an ocean cruiser.  Viewed closer, two stainless steel plates extending aft from the hull at the transom - bridle brackets for a Jordan drogue - seemed to confirm it.  I sailed past the stern and asked the woman aboard if it was a junk rig.  She said yes, and I said very nice boat.  She pointed at Spartina and smiled in replay.

On the second pass off the stern I asked if she had really sailed all the way from Hong Kong.  She did not hear my question, she was too busy asking why I sailed on such "busy water," then answering her own herself with "I suppose you get used to it."  I had hoped to talk to her more, but she climbed in her dinghy and rowed to shore, finding I imagine some air conditioning and maybe a good wifi signal in Old Towne Portsmouth.

This morning on the internet I realized I had misread the boat's name.  I had thought she was called "Speedwell" and had sailed from Hong Kong.  Now I know that the modified Vertue, 25' 4" l.o.a., a teak hull built in 1952, is called "Speedwell of Hong Kong" and is sailed by a woman named Shirley out of South Africa.  Shirley cast off in March of 2002 and seems to have been sailing the Atlantic, north and south, ever since.

Brief meetings with people like Shirley, people who look at life and live their lives in a different way, is one of the reasons I sail this "busy water." 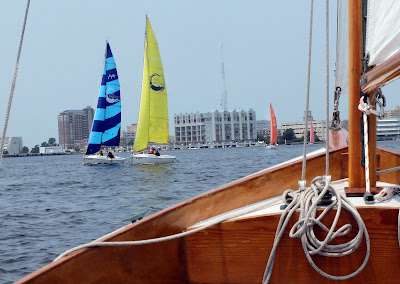 It was a colorful day on the water with "Speedwell of Hong Kong" and all eight of the Harbor 20s, with their bright sails, from Sail Nauticus out on the water.  I saw a few friends on the boats, otherwise filled with summer campers.  Wouldn't that be a nice way to spend summer camp?  The breeze was strong and steady, the air surprisingly dry and cool for the first day of July.  And it was a busy harbor.  At one time I counted the nine sailboats from Nauticus, six barges and four tugs.  You get used to it. 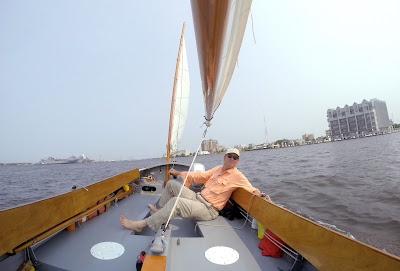 Today I upgraded the software on my GoPro 3+, something more complicated than I expected from a company who has made the camera so simple to use.  I found I enjoy have the camera on board for the occasional photo, something I enjoy.  I expect I will use it quite a bit during this fall's cruise.  And speaking of the cruise, I received a dry compression sack from Outdoors Research, the same company that makes the bivy I use on Spartina.  I had heard of dry sacks and I had heard of compression sacks, but not a dry compression sack until I came across this one.  It should be perfect for the sleeping bag.