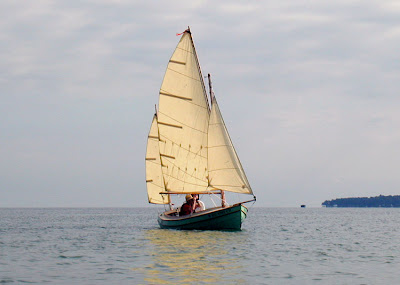 I received an email and some nice photos from Kevin, builder of the John Welsford Navigator Slip Jig.  He and his sailing friends got together for their 15th annual Chesapeake Float. 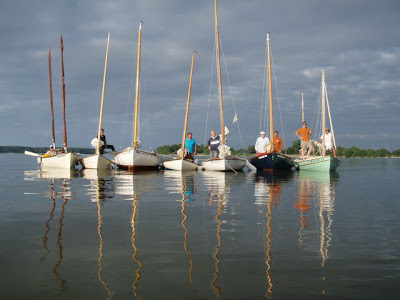 His report was short and to the point....
2 Marsh Cats, a 16 ft melonseed, a sea pearl, a crabbing skiff, 1962 celebrity one design, and the Navigator.   Rain squashed one day of sailing but a good time was had just the same
Sounds great.  I really like the photo of the fleet.  That looks like the Sea Pearl on the left and Slip Jig on the right.  Have to guess at which is which in between - they all look like great boats. 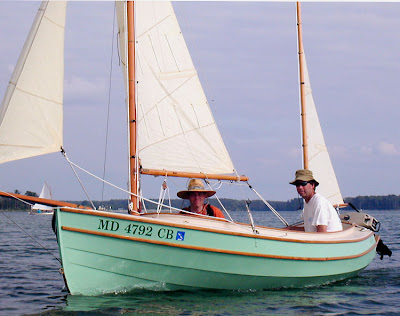 I've emailed with Kevin a few times over the last several months, have never met him in person.  I'm guessing that that is him on the left.  My neighbor Jim, who is in mid-build on a Navigator himself, met Kevin up at the Mid-Atlantic Small Craft Festival.  He got a good look at Slip Jig last fall and says it is one beautiful boat.  Sounds like Kevin knew what he was doing when he built the Navigator.  I'm looking forward to meeting him this fall, getting my own look at Slip Jig.
Nice boat, nice float.
-Steve
Posted by Steve at 8:46 PM