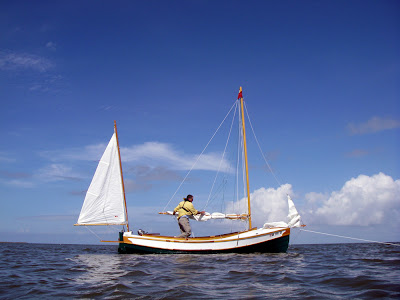 Weather on the first day was just fantastic.  Blue skies, white puffy clouds, a nice breeze and a very comfortable temperatures.  I grabbed a photo of Bruce with my waterproof camera as I enjoyed a swim after straightening out the anchor line. 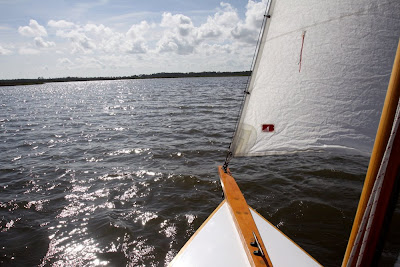 Bruce mentioned that with the east wind we were still exposed to the weather so we raised anchor (after all that) and sailed under mizzen and jib looking for better anchorage.  I had hoped to find a nice little cove I had used on other cruises, but could not locate it.  I had failed to mark it on my gps because it had been an easy (I thought) place to find.  But now the entrance to the cove was hidden in the seemingly continuous line of marsh.  We ended up anchoring in a creek on the northeast corner of Browns Island. 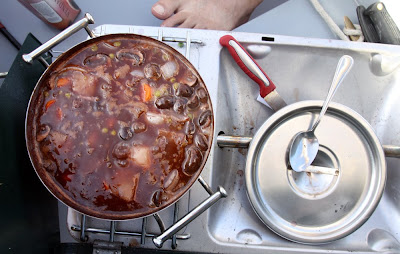 Bruce made good on his promise of improving our dinners.  Beef stew with fresh vegetables cooked in a red wine/veal demi-glace sauce was on the menu for our first night out.  We were anchored early in the afternoon so there was plenty of time for Bruce to cut potatoes, carrots, mushrooms and onion.  Frozen peas came out of our collapsible cooler.  The pot was just about full and I was admonished a couple of times for moving around and rocking the boat while the stew simmered on the Coleman stove.  The hour-plus wait for dinner was well worth it. We had brought along two cartons of red wine for the stew but only needed one. So at great sacrifice to the pantry we celebrated our first night on the cruise by  drinking the second box of wine with the stew. A great addition to a great dinner! 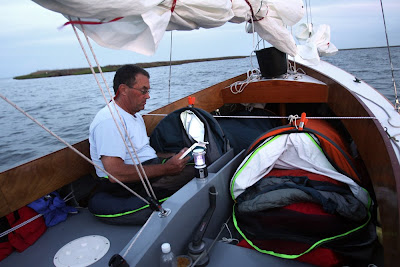 After washing up the pots and pans we set up our bivy's, Bruce's on port and mine to starboard.  The bungee line across the cockpit supports the arches of the bivy's.  We relaxed until the sun went down, heard the first few buzzes of approaching mosquitoes and slipped in to the bivy's for a good night's rest under a fantastic night sky of bright stars.
Posted by Steve at 7:45 AM