By late morning the wind was light and we were making less than one knot towards Wilkinson Point. It was getting hot so we started up the outboard and motored with the engine just above idle. A couple of tiny rain clouds came up from the south. Bruce stood up forward and directed Spartina past the rainfall with one cloud to port and the other to starboard. Hardly a drop of water hit the boat. Nice navigating! 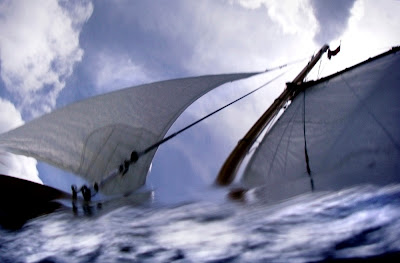 Bruce took the tiller while I tried to photograph reflections of Spartina on the mirror-like water. I like the one above. If you saw it full frame you would see my hand reaching out to the top right holding my waterproof camera. I like the photo because it has a "story book" feel to it with a curved mast and jib bent to the wind. I would like to sail on a boat like that one day (oh, wait a minute.......).

The water of the Neuse River was so still it reminded us of our last trip just north of Cedar Island. We had dropped anchor on the glassy waters of Pamlico Sound and gone for a swim. We were talking about doing the same thing here when I looked to the east and saw the water ruffled by the approaching wind. In just a couple of minutes we were on a broad reach doing four to five knots. (Bruce needed sunglasses to keep the glare from his legs from blinding him.)


This was easy sailing. We ticked off the markers as we sailed up the Neuse River once again making better time than we had expected. It was hot and sunny. The wind was perfect.
Past Wilkinson Point we watched the Cherry Point-Minnesott Ferry cross the river in front of us. Fighter planes from nearby Cherry Point Marine Corps Air Station circled in the skies above us. We talked about how it was something different every day on this trip. Storms, sailing with the wind, beating into the wind, rivers, canals and the open sounds. Each day had its own feel. (In fact most days were like two or three days in one things changed so fast.) By late afternoon the sun was taking a toll on both of us. It is surprising how a "nice day" on the water can sap one's energy. Cooler, overcast days are much easier to deal with. 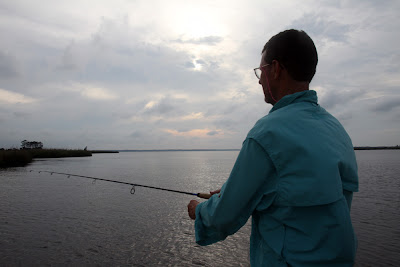 Just about six miles down river from New Bern, so close we could see the Hwy 17 bridge in the distance, we turned in to a little anchorage at Goose Creek. I gave one last, futile effort at fishing - this should have been (and probably was) a great spot for speckled trout - but not for me.
We had dinner - kung pao spam - using a can of spam, fried on the griddle, and a packet of asian noodles with kung pao sauce. Don't knock it until you have tried it (it's already on the menu list for the next trip).

(When we were having dinner in Oriental we looked at the charts and talked about our final leg to New Bern. We were fairly certain that it would be too far to push on to New Bern in one day. So we looked at different anchorage possibilities. After we closed the chart book, Steve noted that we could possibly make it to a high end marina and resort to spend the night or we could stay at an anchorage and camp on the boat. I smiled at the possibility of another night with a restaurant and bed. The little comforts are so nice. Well I thought nothing more about it as we headed out the next morning. When our sailing day was done we put in at Goose Creek found a nice place to anchor and do a little fishing. As the day waned we raised the anchor and moved to a spot a bit more suitable for spending the night. We had settled in and were enjoying the evening after our gourmet Kung Pao Spam dinner. We talked about how great the trip had been and all the great anchorages we had discovered. I then remembered the possible high end marina and resort and mentioned it to Steve. I told him it was a shame we couldn't have made it to the marina to at least check it out. In the end, we both agreed that we really liked spending our last night on Spartina. Before turning in for the night and in a most casual manner Steve said,"if you climb the mast and look towards the stern you could probably see the marina over on the next creek". I looked at him for a few seconds, realized what he was saying and then we both had a great laugh. Sure enough, I saw it up the next creek the following morning as we motored out onto the Neuse River.) 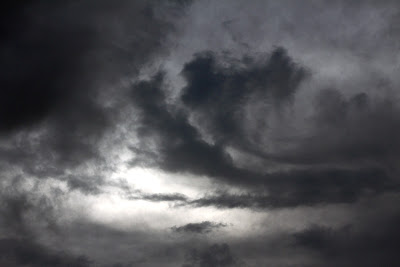 Late that evening the storms finally showed up. They were small, dark and intense storms that passed to the north and south of us. We could look through the mosquito mesh at the stars above and still see the lightening flashing off towards New Bern. Late at night a small rain storm passed over the boat. We had the boom tent ready to set up, but instead just closed up our bivys and let the rain fall.
Posted by Steve at 7:21 AM