day one - get away day

We were up a little after 5 a.m., had the jeep and boat ready to go before six a.m.  It was a little over a two hour drive from my home in Chesapeake to Big Trout Marina in Engelhard, NC. 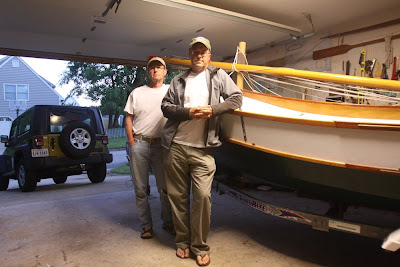 Down at the marina we rigged the boat.  Bruce put the mizzen, boomkin, rudder and tiller in place, I put up the main mast.  It was a great feeling to be rigging the boat under blue skies with a nice breeze. 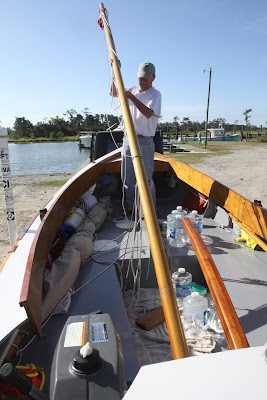 We loaded the water, clothes food and gear.  Below are the fresh veggies and boxes of red wine (for beef stew) in the starboard side hammock-style netting under the foredeck. 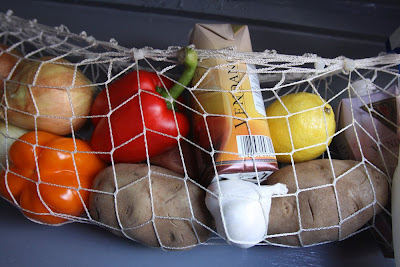 The wind was surprisingly out of the east as we headed down Far Creek just after 10 a.m. Below I'm still under power.  We motored a couple of hundred yards down the creek to where it opens up, there we raised sail.  With the wind out of the east I had to tack back and forth across the channel.  Bruce gave me a look of shock and rolled his eyes each time the center board touched bottom, at least six times before we got out of the creek and rounded Gibbs Point to the south. Sometimes it just bounced along the bottom, sometimes it dug in a brought Spartina to a halt. Every other time I had pass though the entrance channel to Far Creek I was on a reach and sailed right down the markers.  I guess I was hoping the channel was wider than it really was.  Bruce kept asking me if the Captain knew what he was doing (in hushed tones, one crew member to another). 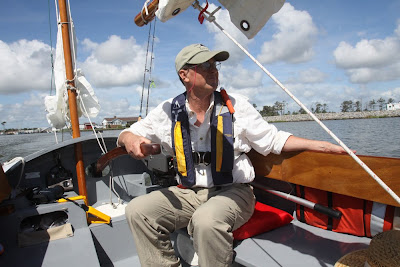 Bruce's total experience in cruising small boats was our six day trip two years ago.  I think he was happy to be out on the water again. 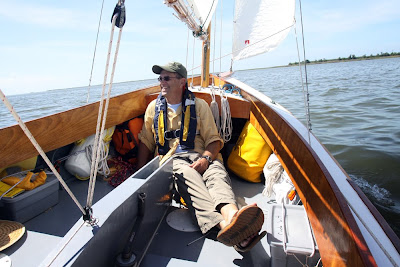