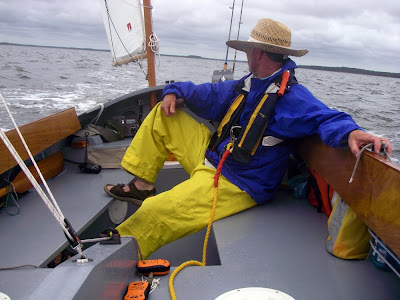 Passing marker "22" where the ICW runs into Gale Creek the wind - which had been good all morning - picked up even more and swung to the northeast. We ran the two miles down the creek in no time and saw that it opened to the southeast out onto the Bay River and beyond that Pamlico Sound. Bruce remarked on the huge expanse of water before us - just wide open territory. Our original plan had called for us to turn west towards Vandemere to see if boat designer Graham Byrnes was at his shop. I've been a fan of his boats, particularly the Core Sound 17 and Core Sound 20, for years (I still like my Welsford Pathfinder best!). But with this wind we were on a reach doing 5.5 to 6.4 knots. I asked Bruce if he wanted to turn up river or make the most of the breeze. He said let's head for the Sound (we'll make Vandemere on the next trip) and we turned to the southeast. 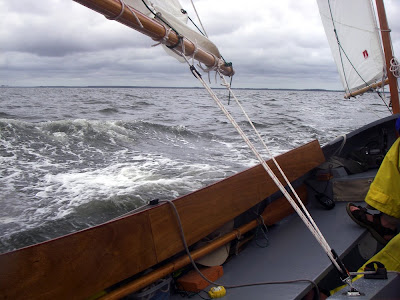 Reaching green marker "3" on the Bay River we looked northeast to see the source of the wind. The biggest, darkest squall we had seen so far was moving in from Pamlico Sound. We rounded up (at point A on the chart below), took in a reef, put on our foul weather gear and then kept on sailing. We could see marker "4" off of Deep Point on the edge of the rain. The chart showed shallow water to the south the marker so we wanted to stay clear of that area. Bruce used Spartina's new binoculars with the built-in compass to take a bearing on the marker as it would disappear soon in the rain. We followed the compass southwest to the Neuse River Junction and turned south. One more great ride in the rain. 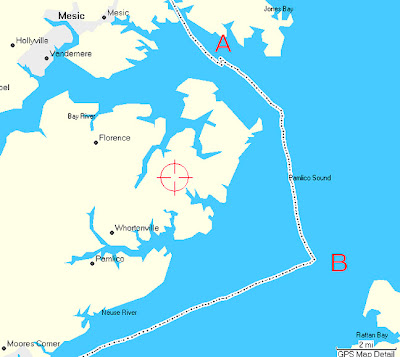 Not 40 minutes later we were sailing under blue skies and white puffy clouds, the squall well south of us. We kept on a course south southwest in the the middle of the Neuse River. I could see poles in the distance and asked Bruce to take a look with the binoculars to see what was there. He was up forward trying to figure it out while I'm at the tiller looking at the charts and we both realized at the same time that it was an island on the horizon - Cedar Island. It was like running into an old friend. We had circumnavigated Cedar Island two years earlier. Seeing it again brought back a lot of great memories. 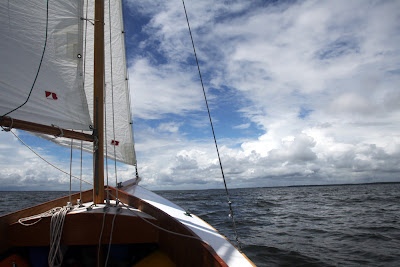 It was only noon and a couple of our possible anchorages were just to the west. We were well ahead of schedule once again. "How about Oriental?" I asked Bruce. Not one to pass up on a nice hotel and restaurant, he smiled and nodded.

Off Piney Point (B on the chart above) we jibed (we had long since shaken out the reef) and turned southwest. The wind was steady and strong, skies blue and sun hot. I was at the tiller, Bruce caught up on some nap time. 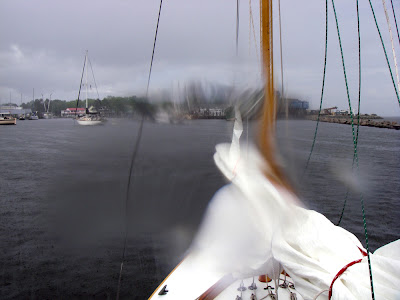 As we approached Oriental wing and wing the wind slacked and then died. After hours of great sailing - I'm not going to complain about losing the wind for a few minutes - we started up the outboard and headed past the breakwater. And, of course, as we enter the harbor another rain storm hits. No wind in this one, just a slow drizzle. There were several sailboats bound for the harbor and Bruce suggested we get in as quickly as possible to get a spot on the free public dock. With a hotel and hot showers in sight we didn't even bother with the foul weather gear. We just let ourselves get soaked. The day and the rain were warm so it really didn't matter.

A 35' boat heading from Wrightsville Beach to Elizabeth City did beat us into the harbor, but they were (fortunately for us, unfortunately for them) unaware of the free dock space and tied up at the cost of $50-some bucks at the Oriental Marina and Inn. We tied up at the free dock (a boat can tie up there for 48 hours once a month at no cost) and watched a parade of large cruisers come in only to find the public dock full. They either had to use the paid marina or the anchorage down harbor. First come, first served worked out well for us. 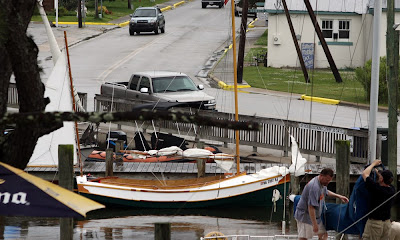 That's Spartina tied up at the public dock. I cleaned her up and put up the boom tent while Bruce did a load of laundry and sorted through our gear in the hotel.

Oriental is a great little town, if you get the chance it is well worth a visit. (A quick review here....We stayed at the Oriental Marina and Inn, great rooms - two story with balcony and all the comforts at a good price. Nice open bar by the pool overlooking the harbor. Ate at the Toucan Grill - it was great when we ate there two years ago (grilled mahi with melba sauce sandwich for lunch and excellent steak dinner), this year the food was good, not as great.)
Rain fell for much of the evening and talk around the dock was not good about the next day's weather. One skipper, who had seen our boat, told us the forecast was for 50% chance of thunderstorms. "Might want to reconsider" he said. Bruce didn't miss a beat and told him with a smile "We're going anyway."