We were up before dawn on the last day of the trip. The marsh grass glowed orange with the rising sun. Tall clouds hung off the bow well to the south of the Neuse River. The wind was strong out of the southeast. 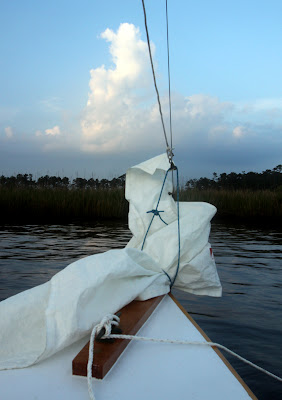 We slipped past the shoals and crab pots at the mouth of Goose Creek and returned to the Neuse.  A fine reach carried Spartina to the middle of the river where we fell off until the wind was over the port quarter. It was a straight run to New Bern. The wind was steady and the river was smooth, we were moving at six knots. 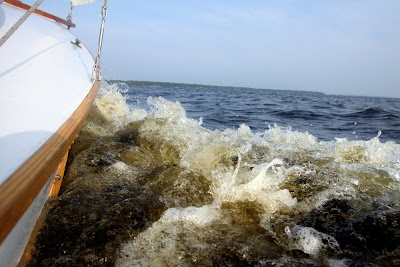 Once again, easy sailing. I still can't get over how the winds worked in our favor throughout the trip. I never would have expected, certainly wouldn't have hoped for these winds out of the north, east and southeast and just when we needed them. 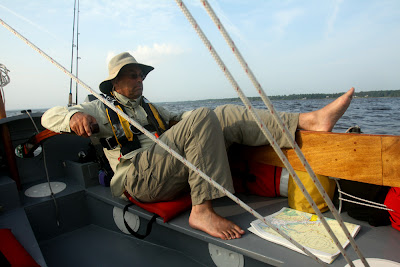 All too soon we could make out the sign on the Outback Steakhouse on the south side of the Trent River entrance. And then our hotel. I had mixed feelings. Excitement, because we were in sight of our goal. Regret, because the trip was about to end. We followed the channel markers up to the Hwy 17 bridge where I took the tiller from Bruce. He took the binoculars and went forward to locate navigation aids as we approached the bridge. We passed under the bridge and swung to the west towards the Trent River. The causeway and drawbridge were being rebuilt and it took a few minutes to pick out the channel. A power boat leaving the river showed us the entrance. We snugged up the sheets and headed on into the harbor. After a couple of tacks in the small harbor between two marinas, we headed up into the wind and dropped our sails. 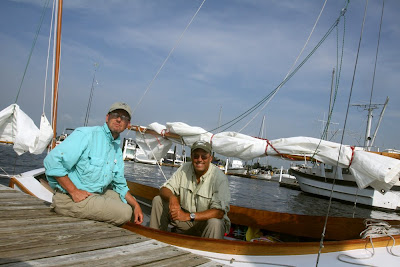 At the docks we looked at the gps. Since leaving Engelhard seven days earlier we had sailed 154 nautical miles during 46 and one-half hours of sailing. Average speed for the trip was 3.3 knots. I like those numbers. We travelled a good distance and kept up a pretty good pace. But they don't begin to describe the fun we had, the beautiful marshes we had seen, the storms we sailed through, the expanses of water we crossed or the people we had met. It had been a great trip. What I've described here on the blog is only a small part of our adventure. 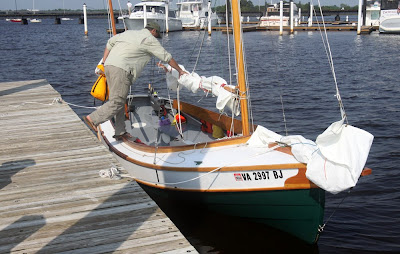 We tied up at the end of a long finger pier filled with mega-yachts. Spartina probably looked like one of their dinghies. We tracked down the dockmaster who directed us to a nice slip on a small boat dock, then we checked into the hotel. Back at the boat we were once again answering questions about Spartina and the trip. Yes, she is home-built. Yes, we slept on board. No, we weren't crazy. Yes, it was a lot of fun.

Arriving by boat got us a discount at the hotel, staying in the hotel got us a discount on the dock fee. That's a good deal if you ask me. Bruce took the photo below from our hotel room window, you can see me rigging the boom tent on Spartina at the bottom right. We had a great time in New Bern. Very nice town, great sailing area. If you ever visit New Bern, make a point of having the shrimp and grits at The Chelsea. You will know then that you are in the South. 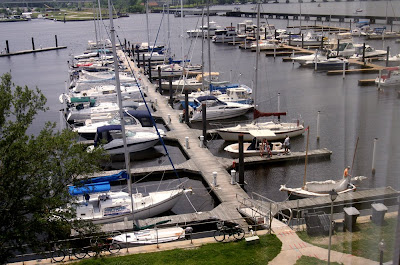 And that was the Skeeter Beater 126. I want to say thanks to everyone who has taken a moment to read about the adventure. I hope you enjoyed it.

Utterly fantastic. I've been peeking for construction clues, in awe of the sailing shots and weather, and carefully noting the cruising / cooking / bivying tips. We're in your debt!

When I've done (shorter) trips like yours often I'm so glad to get cleaned up and comfortable that it takes a while (hours, days) before I miss the trip itself. How long until you were aching to be back on the water? And when is the next trip?

thanks for the note, I'm glad you find the blog worth reading.

As for myself (maybe Bruce will chime in with his thoughts) I felt rested, clean and relaxed when we got to the dock. A good shower did not hurt, but I felt in great shape. I had to go out of town the following weekend for work, so could not sail. But I'll be out there on the Elizabeth River this weekend.

They key, in my opinion, was getting a good night's sleep in the bivy. Made all the difference in the world.

Forgot to add that the next trip is late Sept up Chesapeake Bay to the Small Craft Festival. We'll probably continue the blog with the planning of that. I'm sure we'll use a lot of the lessons we learned on this past trip. Steve

Seth, I have to agree with Steve. I was sad because the trip was over. More time out would have been great. Because of how we planned the trip, we were getting a shower at a motel every few days. Our sleeping set-up allowed us to get really restful nights. We ate well and that helps a lot in staying comfortable. I was ready to go again the next day even though we headed back to Steve's house. Besides being out on the water sailing sure beats being at the office, any day. We have enjoyed your comments and glad you have enjoyed the blog. Thanks, Bruce

Thanks for sharing your trip!

Hope you guys are happy, causing people who don't even sail to blow entire afternoons reading (from the archives up and boy is my upscreen button finger tired) about your trip with its oh-so-awesome photography along with entertaining as well as practical notes depicting your level-headed adventuring.

What an exhausted, resentfully envious armchair explorer I am, and what a couple of smug b*#@*%$s you guys must be (should be. I know I would). Great trip. Great story. Thank you both for taking the time to share it.

PS: Bruce, good call on the dry ice. It does open a whole new culinary world to trippers. After two days on a recent canoe trip in steamy south Georgia, one guy unveiled vanilla ice cream that was still so hard we had to blast it with lighters to soften it up enough just to get it out of the container. Makes you go hmmmmm...

Guys, thanks for the comments. Good to hear from you all. Gizmo, I really do appreciate you using the term "level-headed adventuring." That describes it perfectly. We want to have an adventure while at the same time being safe and smart (ok, ok, I'm pushing it with "smart"). Level-headed adventuring sounds just right to me.