I was wide awake at 4:30 a.m. in the room at the Oriental Marina and Inn. Maybe it was the soft mattress on a bed that didn't rock at night, maybe I was just too comfortable. I just couldn't sleep. So I got dressed and snuck out the door with Bruce's camera to take some predawn photos on the waterfront. I photographed Spartina of course, plus a few waterfront scenes. The clear skies (where was that 50% chance of rain we had heard about the night before??) made for a surprisingly bright false dawn. The harbor was glassy calm. 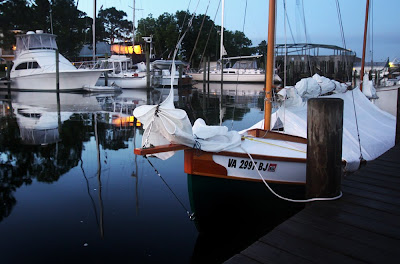 It was peaceful to walk along the harbor. I thought I was by myself but then saw a woman sitting up on the porch at The Bean, the local coffee shop. Her boat was tied up at the public dock just behind Spartina. I said hello but didn't stay too long, didn't want to disturb her quiet morning. 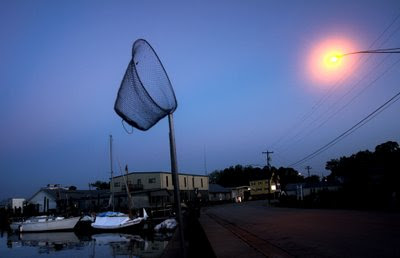 Soon after the sun was up Bruce came down to find me on the waterfront. We walked through the village and stopped for breakfast at a little deli near one of the marinas. 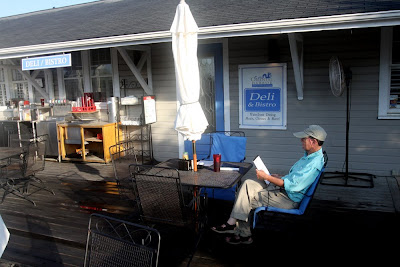 Back at the hotel room we packed our gear and started carrying it down to the boat. It took a few trips to get it all back on the boat. Bruce did a lot of the hauling while I tucked things away. Just after nine, with a group of people watching from the public dock and the porch of The Bean, we brought in the lines and headed down harbor. The people of Oriental were just great. Friendly, lots of questions and plenty of offers of help. There was a debate at The Bean about whether Spartina was a yawl or a ketch - it is a yawl. And someone shouted across the water asking who designed the boat - John Welsford of course. A few people took photographs. There were a lot of well wishes as we pulled away. I wanted to photograph the locals waving good-by but we were too busy making a tight turn to get away from the pier. We did make a point of raising sail in the harbor (just so it looked like we knew what we were doing).

(We had the outboard running to get us out of the harbor. I took the tiller as Steve made ready the sails. I kept looking at the red channel marker off on our left and the shore on the opposite side fast approaching. I mentioned to Steve that I should perhaps start heading towards the channel marker. "No" he said, "just keep on this heading." He kept making ready the sails. The shore kept looming up ahead closer than ever. I suggested again we start heading towards the marker. "Not quite yet", he calmly replied. "The folks want to see some sail". I was a bit skeptical and I swear the shore was almost upon us when up went the main. "Now tighten the jib and bring her to port", Steve ordered. Sure enough Spartina responded smartly and we headed out the remainder of the harbor and up the channel under sail. We were styling again. Steve just stood there looking at me and smiling as if to say, "What are you worried about?" He knew what he was doing.) 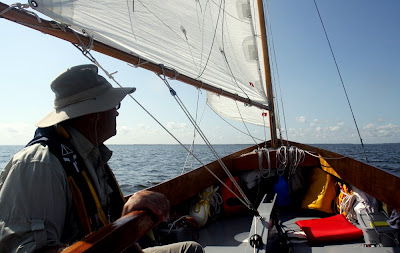 A light breeze carried us across the Neuse River on almost the same course we had sailed two years before. We tacked off a white sandy beach and headed slowly towards Wilkinson Point. The wind fell off until we were making just a knot or two. A relaxing morning with a great blue sky. Whatever happened to those thunderstorms everybody was worried about? 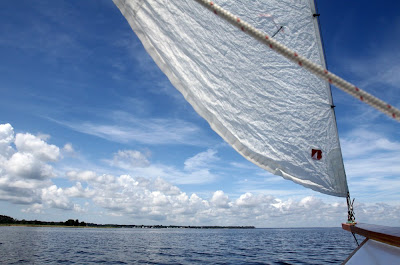