day four - wind and waves on the bow

We rode the southeast wind, blowing maybe 10 miles an hour, across the Pamlico River to the southern shore. We were headed east and with a forecast of east winds at 15-20 I knew we would spend the day tacking into the wind. Our tacks were short, to about the middle of the river and then back to the southern edge. On our third starboard tack back in to the river dark clouds came up from the south and we were soon in a stiff squall. Bruce continued his steep learning curve and kept the tiller as the rain fell and the wind kicked up. With that great wind we decided to hold our course and make the tacks all the way across Pamlico River. 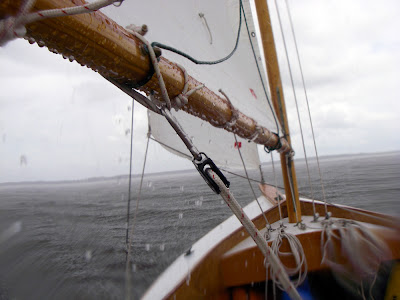 The rain moved on and skies cleared but the wind, having swung from southeast to east, kept getting stronger. I took the port tack back to the southern edge and then turned the tiller back over to Bruce for a long beat back to the north shore. Bruce was smiling and laughing, he had never seen wind like this before. He mentioned that he was feeling a lot of pressure on the tiller. I suggested he slack the mizzen sheet to spill a little wind and the tiller immediately eased up (another nice thing about the yawl rig). I didn't have an accurate way to measure the wind, but I suspected that the forecast of 15-20 was proving accurate. 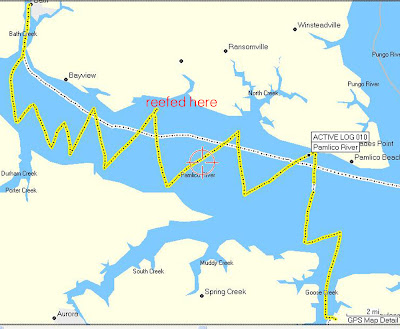 Spartina was handling the wind just fine. I liked looking up at the bright mainsail, pulled taught and smooth by the wind. But the waves were getting to be an issue. A quick look at the charts showed that with an east wind the waves started building inside of Ocracoke Island and steadily grew as they made a fetch of over thirty miles across the shallow sound and up the river. The narrowing river left the steep waves confused. I consider the Pathfinder to be a relatively "dry" boat, the flare of the bow planks tend to push waves up and away from the hull. But when these steep waves slapped against the hull they sent spray up ahead of us. And of course the wind and motion of the boat carried it right back in to the cockpit. While one of us sailed the other one sponged out the water coming aboard. 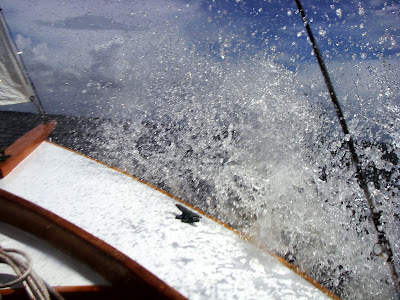 Bruce still had his foul weather gear on from the squall so he was comfortable as the spray came flying. I had taken off my foul weather jacket and did not want to mess with my pfd and harness to get it back on, so I resigned myself to being wet for much of the day. 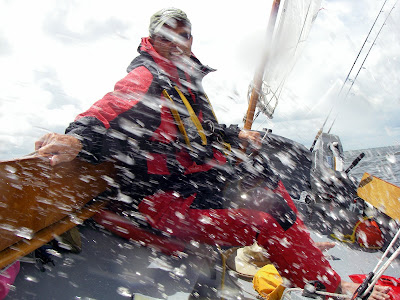 Bruce was at the tiller for another long starboard tack to the north shore when the wind and waves, maybe because we were entering a wider spot in the river, increased. I was up forward sponging the water out of the lee side of the bunk flat when Bruce mentioned that my weight on the low side was causing Spartina to heel even more. I told him not to worry about it and kept on sponging just as I noticed something I had never seen before - water was coming in the boat from the outboard engine well. I think a combination of the boat heeling, the bow riding up the face of steep waves (lowering the transom) and the confused chop was letting water slip up inside the well and over the forward edge every minute or two. About that time Bruce said the wind was feeling stronger. "Should we reef?" he asked. I looked around for a minute and saw some more water come out of the engine well and said "Good idea!" 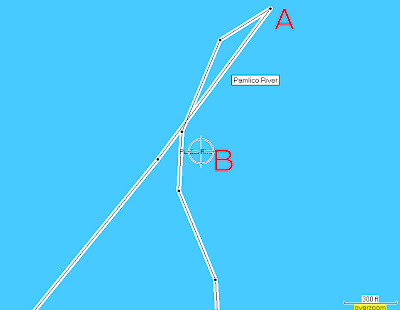 Bruce pulled the mizzen sheet taught, freed the jib sheet and we pointed up in to the wind (love that yawl rig). I told Bruce to sit tight while I reefed (he is learning a lot about handling sailboats, but with the wind and waves it was not the best time for a "how to" on reefing). Above is our gps track from the reefing. We started at "A". I went forward and uncleated the main peak halyard and lowered it to the point that the gaff was horizontal. Then I undid the main throat halyard and lowered the gaff, still horizontal, about a foot. I put the reef hook in the grommet for the first set of reef points, walked to the aft end of the main boom and used a downhaul to pull down the grommet at the aft end of the reef points down to the boom (sorry, I'm a self-taught sailor and do not know the terms for all the edges of the sail). Then I walked forward, tying in the three reef points as I went, and then raised the reefed main. It took just a couple of minutes. You can see that with the mizzen pointing the boat into the wind we lost only about 300 feet while reefing, pretty good for as windy as it was. We started to sail again but as I was not happy with the shape of the sail. So at "B" I went to the aft end of the main and adjusted the downhaul until the sail was smooth. With miles to sail into the wind I wanted the main to be as efficient as possible.
We fell off and picked up our speed right away. I didn't notice any loss of performance with the reefed main, but we both saw it was a LOT easier to handle the boat. Bruce stuck the waterproof camera over the side to get the nice photo below of Spartina rushing through the water. Pretty neat! 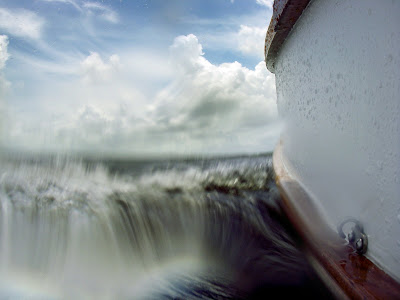 Were we at any risk? Not at all. The Pathfinder is a stiff boat and I think we were just sailing in some pretty rough conditions. I never felt that Spartina was even close to being knocked down. In fact with all of our gear on board she sailed stiffer than normal. I told Bruce that anytime we felt the weather got to be too much we could drop the main and sail under mizzen and jib to any number of protected creeks on either side of the river . (I was hit by a thunderstorm last summer that registered an increase in wind from 15 to 32 mph at a nearby weather station - I dropped the main and sailed comfortably along at seven knots with mizzen and jib.) So no, I don't think we were at risk. We were simply sailing a well-designed boat up to her abilities. Thanks to John Welsford for a beautiful, safe design.
We still had five more long tacks to get down river and then a short tack to get around Reed Hammock and in to Goose Creek and the icw. It was a long day. No lunch and we probably did not get enough water. The sun and wind took their toll (just being exposed to weather, any weather, for 10 or 12 hours straight saps my energy). We were both disappointed when I misread the shoreline and mistook Indian Island for Reed Hammock, but we kept on going and I'm proud of some of those tacks we made almost up to the piers on the north shore of Pamlico River.
Posted by Steve at 9:22 PM