a day for reefing

There was a Commonwealth Nations feel to Crawford Bay Sunday.  Of the four cruising sailboats anchored there, one was from Canada (very common) and two were from Great Britain (not so common).  That is Delphinus from Dartmouth, England.  The other boat was Shiver (great name I thought) from Cowes. 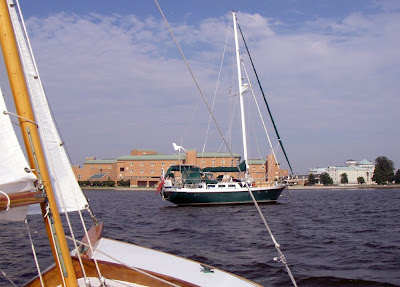 The forecast for light winds was wrong, it was blowing pretty good out of the northwest for most of the day.   I had rigged and launched Spartina in the wind shadow of downtown Norfolk, but as I got out on the river I could feel the wind and see the chop on the river. 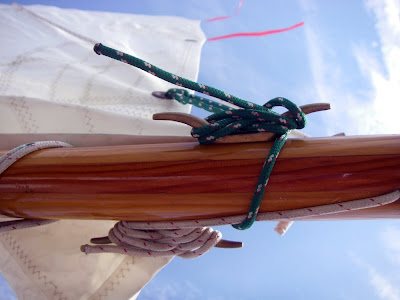 So I tied in a reef.  I've finally gotten it down so I can put the reef in and still have a good, smooth set on the main.  The white line is the main's outhaul, the green is for reefing.  I used to tighten that reef line all the way down, the end result being an unfortunate crease across the sail.  But now I leave enough slack so that the grommet on the first set of reef points is six inches above the boom.  That gives the sail the nice smooth surface (below).  It looks better, but more importantly the reefed main is much more efficient and I can sail very well to the windward this way. 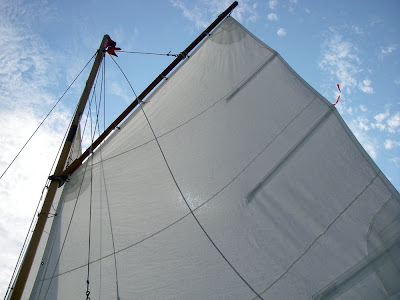 I've been thinking a lot about Onancock, Onancock Creek and Tangier Island since my visit there last week.  Our original plan had been to launch at Crisfield, Md, sail to Smith Island and then head north.  If I can rack up some extra hours this summer for an additional comp day or two I'll see if we can leave out of Onancock, sail to Tangier and then on to Smith Island before heading north.  I'll have to see what Bruce thinks when he gets back from Alaska. 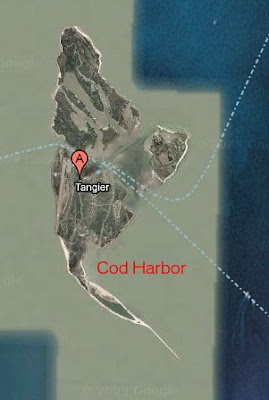 I've always wanted to anchor overnight down at Cod Harbor.  My one sailing trip there the wind was out of the north and north east, the Cod Harbor anchorage would have been too exposed to the wind.  So maybe this next time the winds will be more favorable - it would work fine for winds out the south, southwest, west or even northwest.  Not really a harbor, it is really a long spit lined with beautiful white dunes.  Clear, shallow water - I think it would be a great place to spend an evening.