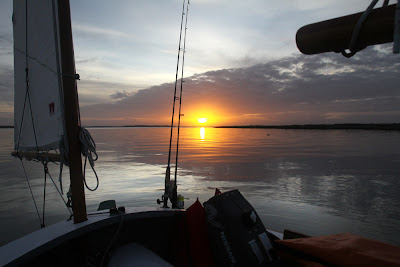 Awoke to a beautiful, buggy morning. At other anchorages the mosquitoes arrived at sunset and left shortly after they realized they could not get to us. In this particular creek they buzzed outside the mosquito screen all night long. No problem at all for sleeping, but they were waiting for us in thick clouds the next morning. It was a great sunrise, so I hopped out to get a photograph.

I've had two distinctly different experiences with mosquitoes down in the marshes and have come to believe it has to do with the nature of the marsh grass. Where the marsh grass is green the mosquitoes are small and not very aggressive. Where the marsh grass is brown, such as with this marsh, the mosquitoes are very large, numerous and very aggressive. They just won't go away. Are these two different varieties of mosquito? I don't know. But there is a clear difference in size and behavior.  Why is some of the marsh green and why is some brown?  I don't know that either.  But in the future I will anchor farther from shore when the marsh grass is brown.
In reality, with a bivy sac for a good night's sleep, it isn't that big of a deal. Ten or fifteen minutes of dealing with the little pests is not that much of a price to pay for a great day on the water.

We made a couple of tacks in Spencer Bay and slipped behind a little islet at the mouth and entered Pamlico Sound. The light wind picked up from the south and we crossed the mouth of the Pungo River at 3.5-4 knots. Great sailing on wide open water. 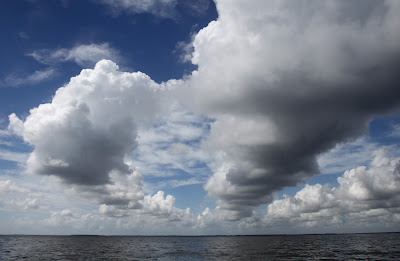 The wind fell off after a couple of hours and we motor sailed west. Lines of clouds streamed up from the south as the air became increasingly humid. A quick rain storm arrived late morning and the wind returned as the showers moved on. 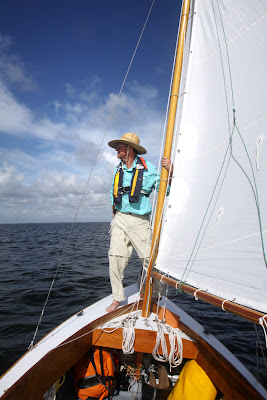 By early afternoon we had passed our planned anchorage at Mixon Creek and kept on going towards Bath. The wind swung from the south to the east and we sailed wing and wing at 4 knots on a grey, humid afternoon. It wouldn't last, the wind died two miles short of Bath Creek. We started out the outboard and headed to the dock.
Posted by Steve at 7:48 PM