Day two started with a confirmation of our theory - mosquitoes can be beaten! Our bivy's did the job. We each had a good night's sleep. We woke up in the middle of the night to admire the Milky Way and shooting stars. It was only an occasional hum outside the mesh that reminded us of the mosquitoes coming over from the marsh. In the morning we found a few of them lying in the dew on the deck, dead :). 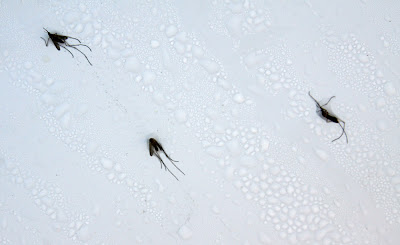 I'm an early riser and was usually the first up to get dressed and get ready for the day. Bruce climbed out of his bivy a few minutes later. 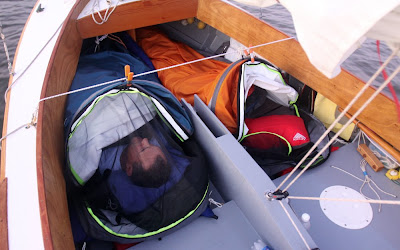 It was a fantastic morning looking west across Wysocking Bay towards the outer banks. Look close and you'll see flocks of birds at the left above the clouds and at top right. Ground fog hung back over the marshes. A great start to an interesting day. 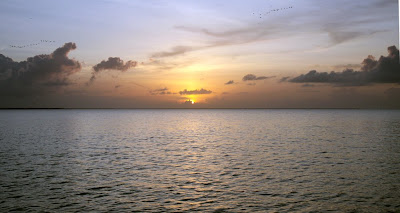 Less than an hour later, not yet out of Wysocking Bay, our first rain storm hit. Dark clouds filled with a heavy rain and stiff wind came out of the north east. Bruce was at the tiller and handled it all very well - it was a great job, particularly when you consider that it was only his eighth day of cruising. 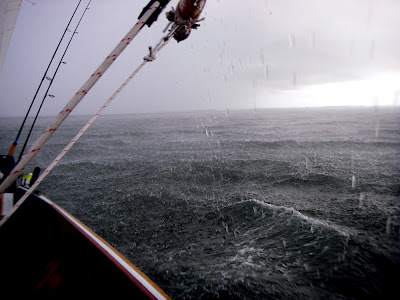 I was busy sponging out the boat. The Pathfinder is not a self-draining boat. With a heavy rain water can build up quickly inside the hull. In this case it took just a couple of minutes to have a good amount of water sloshing around. But this is one of those areas where we could improve our time. Single-handed I would have heaved to and sponged out the boat. With Bruce at the tiller I was busy sponging while he kept us on course. And the fact that the storm brought stronger winds did not hurt a bit. 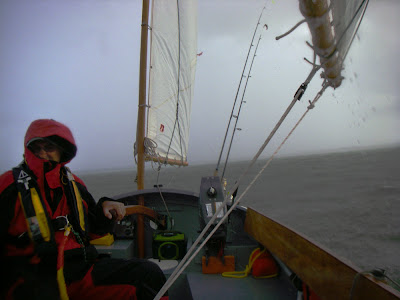