day one - south to Wysocking Bay 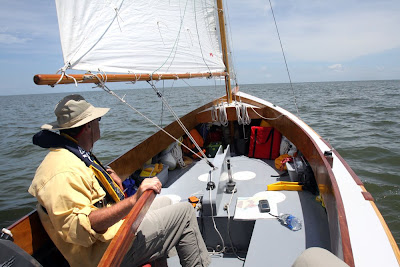 The east wind stayed around all afternoon.  Bruce kept Spartina on a starboard tack to get away from the shoreline, we would have to pass by a couple of points and shoals as we turned south for our first anchorage.  I think John Welsford would like the photo above.  Gear and supplies for two people for two weeks - and still plenty of room in the cockpit. 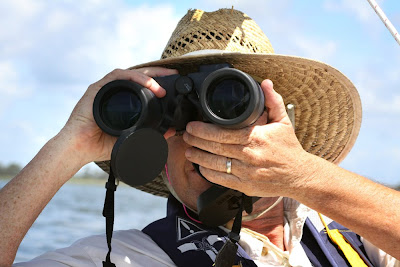 Bruce generously donated a new pair of binoculars to Spartina (last trip he gave two inflatable pfd's with built in harnesses).  My old pair of binoculars, bought in the late 80's, were not in the best of shape.  With the old glasses I could almost always tell the color of a marker (green or red) from ten feet, but reading the number on the marker was a problem.  These new binoculars were great. 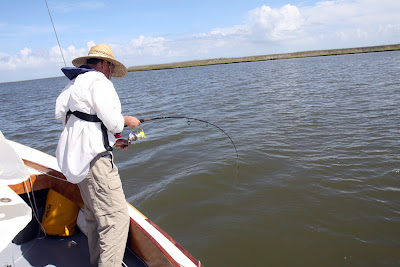 Bruce had the tiller as we skirted the marsh in Wysocking Bay.  I thought we were off to a great start on fishing as I had a great fight on my hands with the first cast of the trip.  The fish made two great runs - just like a puppy drum always does - and then made a third shorter run stripping line off my reel.  I could even see the coppery colored fins splashing the surface in the distance.  I worked it in close to the boat only to find I had foul hooked a coppery colored cow-nosed ray.  This was not a great omen for fishing on this cruise.  Anyone have a good cow-nosed ray recipe? 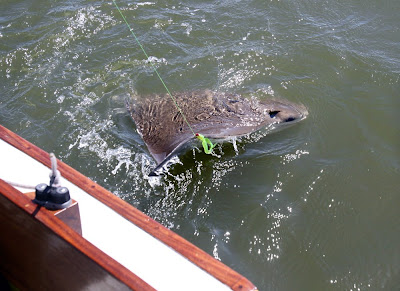 Bruce continued to discretely question the my seamanship when I went to reset the anchor and left too much anchor line out in the water.  It slipped under Spartina and caught on the back edge of the center board.  We spent a few minutes trying to figure out how to use our minds and not our bodies to solve the problem.  But eventually bodies won out as I realized I would have to get in the water to straighten things out.  Fortunately the water was warm and it was a comfortable swim.  (Hey Bruce, come back!  I won't mess up anymore, I promise!) 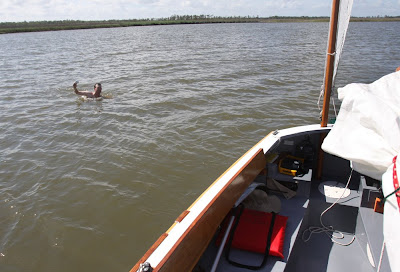