derechos, heat and under the radar storms 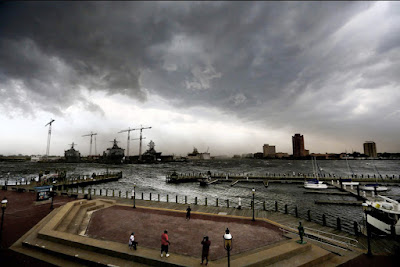 Is it all because of the heat?  Below you see a map of summer average temperature changes across the country.  For the mid-Atlantic it is an increase of 1.5 degrees.  For the west coast, including my hometown of San Diego, it is 2.7.   Above you see a derecho that pass through Norfolk several years ago. 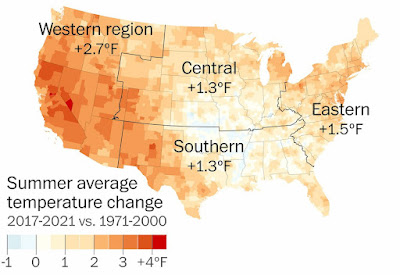 A recent story in The Washington Post linked derechos - a line of severe thunderstorms sometimes referred to as straight-line tornados - to increased temperatures.  From the story (which refers to a derecho that went from the Midwest to the Mid-Atlantic a decade ago)...
-----

The violence of that storm event — which coincided with one of the hottest June days on record — raised questions at the time about the role of human-caused climate change. They were questions that, at the time, the research community was not equipped to answer.

Since that infamous storm on June 29, 2012, a number of extreme heat-driven derechos have followed in its footsteps, breaking an array of records while leaving wide swaths of damage from Colorado to Canada.

In just the past six and a half months, two of the most destructive derechos on record have occurred. Both events blasted sections of the Midwest; the first on Dec. 15, 2021, and the second on May 12 of this year. Both events occurred on days with record-setting heat. 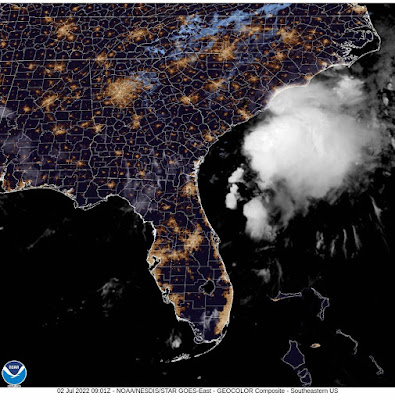 And just a few days ago Tropical Storm Colin (above) seemed to appear out of nowhere.  From The Sun News in Myrtle Beach, South Carolina...
------

The only indication that any tropical weather might appear was the National Hurricane Center's notice Friday afternoon that a low pressure system had developed near Savannah, Georgia, and would likely bring some heavy rain in isolated areas over the weekend.

And yet, Tropical Storm Colin snuck onto the scene early Saturday morning, surprising the National Weather Service. How did this happen though? How was it possible for a tropical storm to spin up overnight with little warning?

Armstrong said Tropical Storm Colin was so weak that it stayed under the radar, literally, until the last minute.

"I can only assume the computer forecast models were unable to see the thunderstorm organization in time," Armstrong said.

------
More heat, more derechos and tropical storms spinning up quicker than computer models can predict.  Kind of frightening.
Posted by Steve at 12:45 PM