Spectacular clouds today on an afternoon where light winds filled into a solid breeze on the Elizabeth River.  A front coming through tomorrow, then some nice sailing weather afterwards. 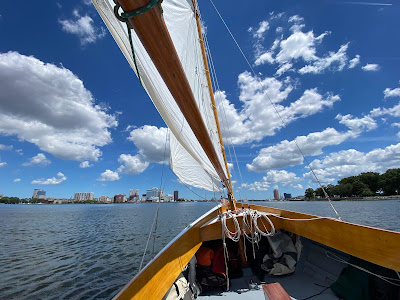 I've had two interesting sightings on the river.  Earlier in the week, maybe Wednesday, on a morning sail I saw a sea turtle.  I have seen sea turtles before on the ocean and on Chesapeake Bay, never before on the Elizabeth River.  What a treat!  I think it is a sign that the river is getting better, certainly much better than it was a decade or two ago. 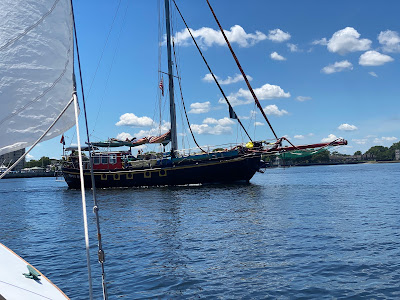 I typically do not sail in the middle of the day in summer but today I did and the timing was perfect.  Just after raising sail the PRINSES MIA, captained by Martijn Dijkstra, came around the corner from the southern branch to the main branch of the Elizabeth.  Here is a nice video about him and his lifestyle, and here is a story about him and his boat from TownDock.  I have crossed paths several times with Martijn, most recently in Oriental (where he is a regular visitor) on the spring cruise a year ago.  I have seen him there a few times, and also once in Chestertown.  We each recognized the other boat and exchanged greetings.  He told me he is on his way to Cape May.  I wished him a good journey as he headed down the River.
Posted by Steve at 5:14 PM