"I don't understand" said the voice over the scratchy connection with Chincoteague Island.  "You say you've got a small boat, and you say your going off for a week or two?"

All I wanted to know was if I could leave my jeep and trailer parked at the harbor after I launch for the fall cruise, but "small boat" and "a week or two" did not jibe for the gentleman at the other end of the line.  After explaining that I've done this sort of thing before, I know what I'm doing, the resigned voice said I could leave my trailer there if I had the ramp permit and if the trailer was hooked to the jeep.  Might want to leave a phone number at the office too. 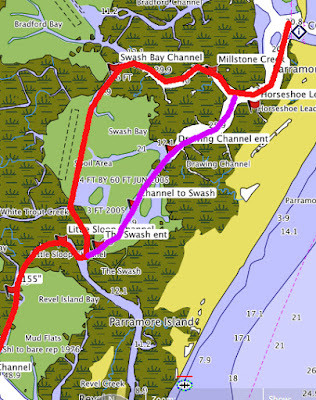 I've been looking over the charts at Swash Bay, the marshy area south of Wachapreague Inlet and behind Parramore Island on the seaside of the Eastern Shore.  If the wind is out of the northern quadrant I will sail out of Chincoteague Inlet and come into Wachapreague Inlet, then sail south through the shallow winding channels.  There are two passages, the marked channel, in red, and what seems to be an unmarked but deeper channel to the east, in purple.  The unmarked channel is more direct, and with a north wind it would be a nice sail. 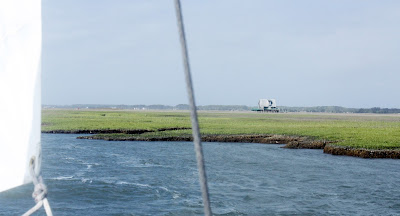 From past experience sailing inside the barrier islands I know that the channels, shallow and with running tides, don't always match the charts.  It can be interesting when trying to decide to go through this opening in the marsh, or that one, or maybe there is another farther beyond.  Miss a channel entrance and there not much room to come about and head back.  The more waypoints the better. 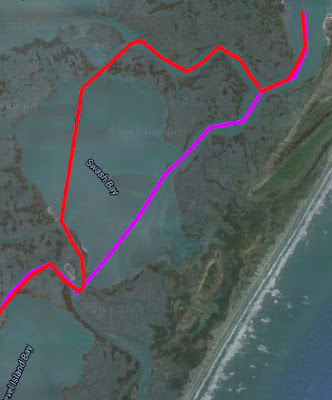 Here is the satellite image of the Swash Bay.  Looks like open water.... I wish.  There is most likely a channel through there, or at least there was when the chart was made years ago, and with a high tide it might be a good passage.  But at low tide, it might be a sand flat, or worse, a mud flat.  We will see.

So Chincoteague is good for launching and leaving my jeep and trailer.  A call to the harbor at Cape Charles, the alternate launching point, told me the same for their ramp.  Just please leave a phone number at the office. 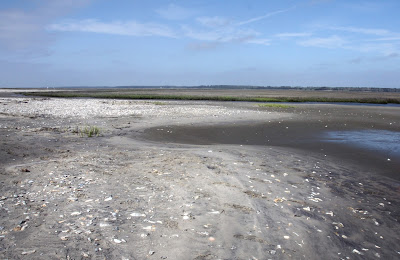