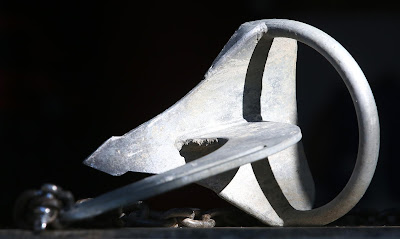 Because of the storms at night, an anchor that broke free from the bottom in the first storm and an anchor that held tight in a stronger storm, I've received questions about SPARTINA'S ground tackle.  So here goes..

The anchor is a Manson Galvanized Supreme 5 lb Anchor.  You can see that at West Marine they sell for over $150, but I got this one from Defender for $30 (free shipping too) on close-out because of a tip from Kevin MacDonald.  It is a great anchor.   When I set this in a muddy bottom not only does the anchor come up covered in mud, so does the bottom two feet of the anchor.  It really digs in. 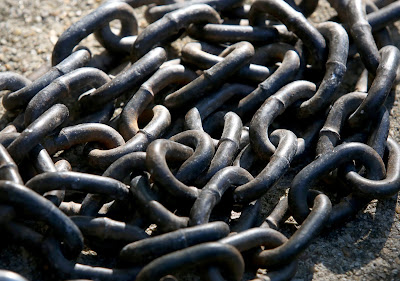 The anchor is attached to five and one-half feet of chain (I always thought it was six but it measured tonight at 5.5).  I cannot tell you the size of chain. 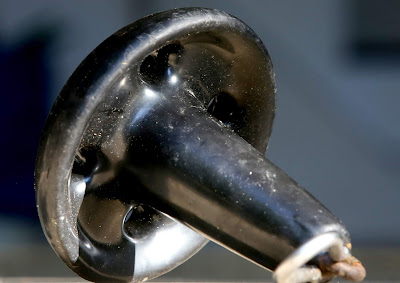 If I am dropping the anchor for lunch or a nap during the day, I'll use the Manson anchor alone.  Anchoring at night I always clip a 5 lb mushroom anchor to the top of the chain to act as a sentinel. 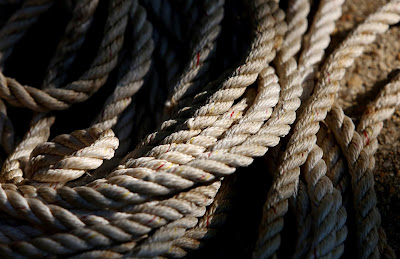 And above the chain is 75 feet of line.  This all fits in a bucket that sits next to the mast.  The bucket it tied by a small line to the mast, and the anchor itself is tied to a bucket.  (I read a story about a small boat that capsized, the anchor line tied to the boat but the anchor falling free, "anchoring" the capsized boat which complicated the rescue.  Everything is tied together so that it stays in the boat.)

I consider this to be a good anchoring system for SPARTINA.  For over a decade I have been using this system (or the earlier version that used a 10 lb. navy-style anchor in place of the Manson).  I have dragged twice.  The first time the anchor dragged, but did not break free, was anchored off a small creek that flowed into the Chester River.  An early and unexpected winter storm arrived with gusts to 60 miles an hour.  The anchor dragged in the silty bottom, but did not come free.

On the second night of the Round the Sound '18 the anchor did break free.  I believe, but will never know for sure, that this was the result of the abrupt shift in wind from 15 mph out of the SW to gusting to over 40 out of the NE, something that happened in a matter of minutes.  I have to wonder if SPARTINA was blown over the top or very near the anchor and when the line became taut on the far side the anchor was yanked up and out of the bottom.  The clay bottom may have also been a factor.

The fourth night of the trip  had the bigger storm, sustained winds to 50, gusts recorded at 64 and they may have been stronger than that.  Anchored in sand in about six feet of water, the anchor held.

It has been suggested that SPARTINA is under-anchored.  Not only am I open to that thought, I appreciate it.  How much of an anchor and how much chain can be carried in a small boat?  Weight and storage space are issues.  And where do I usually anchor?  Typically it is in protected water with an average depth of three or four feet, sometimes less than that (I don't know that  I have ever anchored overnight in more than six feet of water).

The night at Tangier says the system works, the night off the Honga River says, um, not always.  The one change I am considering making - and I have until the fall cruise to do it - is using either 8' or 10' of chain instead of 5.5'.  A little more space and weight, but not much.  This would put a little more weight on the bottom and extend the mushroom sentinel anchor away from the main anchor.  It is worth thinking about.  Ten feet might be the way to go.

I have a 7500 pound boat of 26 feet with a 15 pound anchor and 30 feet of 3/8 chain. The chain weighs about 60 pounds. I've often found that an anchor of less than 10 pounds does not did into the bottom well unless it is sand. I've often heard of chain as long as your boat and I recommend to try it.

My old anchor system with a 10 pound anchor and 6 feet of chain is now my lunch hook but I have room for spare anchors where you may not.

In my old Hunter 235 I used an eight pound anchor and more chain did better for me than adding a mushroom anchor above the chain.

In my navigator Arwen, I carry two anchors - a danforth anchor which weighs in at 7lbs for picnic stops and my main bruce anchor that weighs in at 15lbs for overnight stops. This one holds me in sand and mud in all tidal conditions and winds thus far. Both anchors are attached to 10' of chain; and each then has around 90' of nylon warp.
attached to the smaller anchor I have what you would know as an anchor buddy - a stretchy bungee and that allows me to push Arwen off the beach into deeper water but to be able to retrieve her back to the beach by pulling on a stern rope which runs back to the beach and gets tied to a convenient log, rock or the smaller anchor.

i guess it depends what tidal flows and tidal ranges you also sail in. Our tidal range here is 5m on spring tides but we can have up to 2 kts of tidal flow as well and even more in some of our rivers

One thing I have seen on some of the siltier (is that a word) anchorages off the Pamlico Sound & Neuse River is to replace the chain with steel cable (stainless steel or galvanized). This lets the anchor bury itself deeper, into the (hopefully) denser mud. I suspect it would work well on the Chesapeake.

I think the issue you had in the Honga was a result of the quick 180 wind shift. The anchor was pulled out of the mud and clay bottom and didn't reset for two reasons. 1) the boat was moving too fast downwind and 2) the anchor was covered in clay and mud. With a sand bottom you don't have the issue with the anchor being fouled with mud. IMHO you anchor system is great and NO anchor works 100% of the time in all conditions.

Kirk had a 6KG Rocna and dragged that same night in the Honga. The 6 KG Rocna is rated for a 11000 pound boat. Arguably the Rocna and Manson are the best you can get and even a largely over sized Rocna didn't hold that night. Dragging is just something that has to be dealt with when it happens and it looks like that's just what you did well.

I just bought ground tackle for my Pathfinder, and after a wide-ranging discussion over on the John Welsford Facebook group, some obsessive internet research, and reading your posts, I went with a 13lb Mantus anchor, 15 feet of 1/4" chain, and 150' of 3/8" nylon rode. I may shorten the chain if it turns out to be too heavy or bulky once aboard. S/V Panope's anchor test videos on YouTube were especially helpful. In his tests the Manson Supreme did have some resetting trouble due to clogging with mud, which may be of interest to you to watch.

This setup might be overkill, but I'm a light sleeper on the hook. The Mantus is the same style of anchor as yours, just a bit heavier, and has the highest "tip weight-to-overall weight" ratio of all the anchors Panope tested. I think the extra weight, and especially the extra tip weight, might be helpful to reset the anchor in the case of a 180-degree wind or current shift. The 15 feet of chain, according to my decidedly non-scientific bathroom scale, weighs in at 11.7 lbs. It remains to be seen whether the 13 lb Mantus will fit in the anchor well when assembled.

In my research I read the entire range of advice, up to needing five times the boat length in chain with a 30 lb. anchor. It seems to me that you've tested your rig to its limits in your chosen cruising grounds; if you experience winds very much above the ones you've been through, in a 500 lb boat, a dragging anchor might be the least of your worries!

If you're comfortable with what you have, keep it, or size up if you feel it's warranted. In any event I appreciate you starting the conversation based on your experiences...it's incredibly helpful to those of us just getting into small boat cruising.

I'm in an 18' Oughtred Arctic Tern, weighing in at about 450 pounds. I've been using a Danforth style anchor in sand, mud, cobble with about 15' of chain and have had no issues, though I am pretty careful about setting the anchor. I've had no good luck with the Lewmar 4lb claw. It hates digging into anything except sand and even then has some challenges.

What I'm most curious about is how you can say you've mostly anchored in 6' of water! What is the tide range out there? Here in the Pacific NW, we regularly see 10+' tidal shifts.

Can you also talk more about how the mushroom anchor works as a sentinel?

And Bobby, wow, sounds like with your set up, your boat isn't going anywhere.

Given that you've dragged anchor twice in a decade I'd say you've got the right setup. You can't hit 100% but you're awfully close. If you carry a bigger anchor you may or may not drag in the circumstances that caused your past problems but you will definitely carry the extra weight every time you sail.

Your home is valueble for me. Thanks!… gsn casino games

After research just a few of the blog posts on your website now, and I truly like your method of blogging. I bookmarked it to my bookmark web site list and might be checking again soon. Pls check out my website as properly and let me know what you think. casino real money