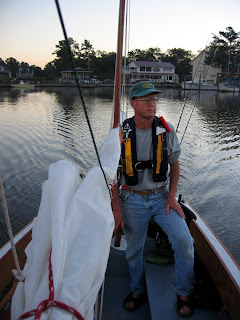 I've got a four day weekend with a nice forecast on two of the days.  I hope to get out Saturday.  Winds are supposed to be in the 14-16 mph range, clear skies and temperatures of about 60 degrees.
One of the nice things about doing this blog is that I've been digging back through the files of old photos and finding images I had forgotten about.  Bruce and I did an "edit" after the trip to pick out about two dozen photographs for Duckworks and some other publications.  After that edit I forgot about all the other images.
Bruce shot the photograph of me (top) as we were leaving Oriental.  I don't think the sun was fully above the horizon.  That's the Oriental Marina & Inn where we stayed back on the right tucked behind the trees.  The small building to the left of the mizzen mast is a coffee shop.  I think it was called The Bean.  When we arrived we tied up at the public dock right in front of The Bean and within minutes we had several of the regulars down on the dock asking about Spartina and our trip.  Plus we had several offers of rides to get gas and supplies.  Oriental is a great little town.  They have a nice online publication down there called TownDock and I enjoy keeping up with the news there. 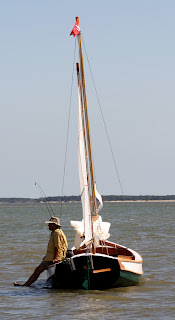 I shot the photo of Bruce as we were anchored in a foot or two of water off of Bird Shoal near Beaufort.  I like this picture for two reasons.  One, Bruce looks nice and relaxed.  This was five days in to our trip in '07 and we were both very comfortable with the cruising routine.  And two, the tumblehome on Spartina can clearly be seen.  The tumblehome is where the upper planks tilt inward and the beam of the boat narrows as the distance above the waterline increases.  You can see that on the transom where the upper planks tilt in towards the top.  Designer John Welsford says that the Pathfinder's hull was inspired by the Cobles used by fishermen on the northeast coast of England.  John modernized the hull and adapted it to the home builder.  But he kept that classic look and good sea-keeping ability.  Thanks John!
PS - That nice inflatable pfd with built in harness that I'm wearing in the top photo is a gift from Bruce.  He brought two back to the east coast for the trip.  After the trip I tried to return them to him.  He said no, they belong to the boat.  Thanks Bruce!
Posted by Steve at 7:36 AM