I ran down to Outer Banks for a couple of days of work.  Any visit to coastal Carolina - for fun or for work - is a treat.

While down there I came across a new bug repellant called "Outer Banks Skeeter Beater".  I gotta say I really love that name.  Those of you who have been visiting this blog for a few years might remember that it was originally called The SkeeterBeater 126.  That came from a cruise Bruce and I made in North Carolina with the expressed purpose of surviving the mosquitoes.  Our solution at the time was the OR Alpine Bivy, which proved to be a huge success on that trip.  But even with the bivy there were times when the mosquitoes were still a problem - I mean you have to come out of that bivy sooner or later and sometimes the skeeters were waiting. 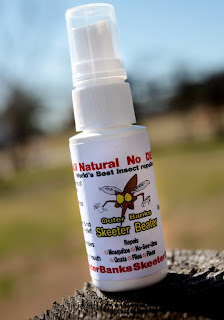 The Outer Banks Skeeter Beater might be the solution to those early morning - or sometimes early evening - mosquitoes.  I say "might" because we are in the thick of winter with no bugs in sight, I haven't had the chance to try it out.  But what I'm hearing is that a lot of people that spend time outdoors in coastal Carolina - forestry workers, highway workers, fisherman - are starting to use it.

The spray is a non-deet repellant made with lemon grass oil and rosemary oil.  I can tell you that it has a nice odor but does not have the oily feeling of deet products.  Nor does it damage plastic or rubber like deet (my SPOT locator beacon has white spots all over it from an poorly aimed spray of deet).  I can't endorse the product as I have not used it.  But this is made by folks that live in the swamps of North Carolina.  If anybody knows about mosquitoes, these are the guys.

There will be a bottle of Skeeter Beater on board Spartina for the Spring cruise.

I received my copy of Bland Simpson's "The Inner Islands, A Carolinian's Sound Country Chronicle" today.  It is a "new" copy of the book bought from a used book dealer through Amazon.  A $24 book for $2.  Not bad.  And it was autographed too!  This book will make for perfect winter reading. While I have sailed quite a bit through the Sounds of North Carolina I will admit that I am very ignorant of the local history.  I would like to know more about the islands and villages, some which still exists and others that do not. 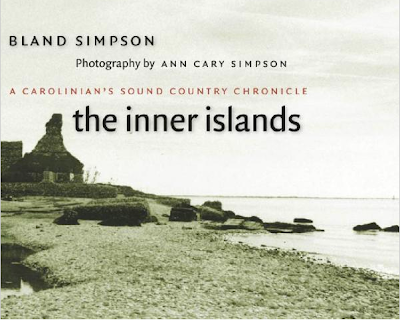 Here is a description of the book from Amazon....

I suspect that after reading this book I will look at the Sounds of North Carolina in a completely different way.

It's a great book, and yes you will think of many of the locations you sail differently and love recalling their history when there. I've really enjoyed this of the areas I paddle so often.

I read your wonderful comment about Outer Banks skeeter Beater. I am one of the owners. I have 2 others who are also owners. We are glad you love our product just wait until you try it.Though you did get one thing wrong about my product, it is not the old name skeeter beater 126,
it was R & B's skeeter beater that came from Florida. We changed it name to outer banks skeeter beater.
There are so many uses this product does it will blow your mind,
if you would like to get in contact with me please email me at becky@outerbanksskeeterbeater.com
thanks again for the blog about us

I realize that the name is not the same - but the phrase "skeeterbeater" just makes me smile.

I gave a bottle of your stuff to a friend who will kayak through the Everglades in a couple of weeks. That ought to be a good test.

I gave some to my dog and now he can fly!