A beautiful, chilly, breezy morning on the water off of the Virginia Beach tourist strip.  We headed out of the fishing center at first light, had the lines in the water about 30 minutes later. 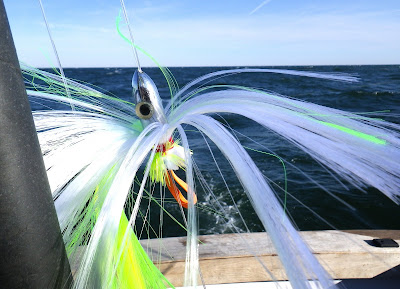 The forecast for mostly cloudy skies proved wrong, it was sunny.  The forecast for light winds was an underestimation, it was a little breezy.  But there is plenty of shelter on a 54 foot charter boat.  The morning sun felt great as we relaxed in the cockpit, waiting for that first rod to go off.

The water was thick with bait - menhaden.  And that has drawn in not only stripers and bluefin tuna, but also whales.  For thirty minutes we watched of pair of humpback whales playing, spouting and rolling on the surface of the ocean.  They laid on their sides and waved their long white flippers in the air.  I just had my point and shoot, no long lens, so you will have to take my word for it. 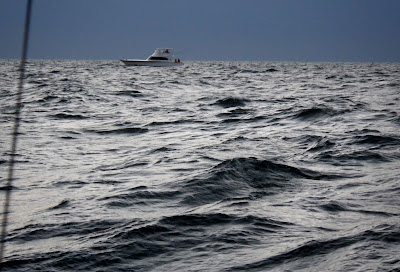 I took the first rod with a fish on, it turned out to be a nice 30 pound fish that gave me a little more than I expected for an early morning workout. 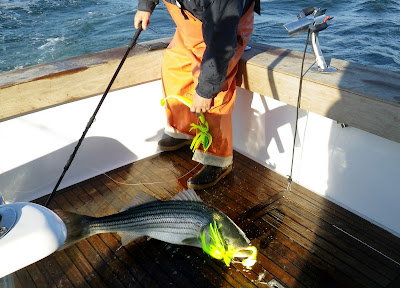 This is at least our tenth year (we've lost track) of doing this little fishing expedition, either to the Outer Banks or to nearby Virginia Beach.  Dinner, a little party and playoff football on the television the night before, then to the docks for the 1/2 day morning trip.  Average age of those on board, measured by the calendar year, is probably in the mid-50's.  Average age, measured by maturity displayed during the once a year adventure, is about 12. 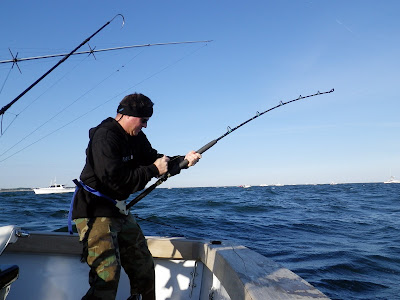 It was a good day for fishing, not a great day for catching.  We brought in just three stripers.  But they were a nice class of fish - each weighing around 30 pounds.  Filleted out the gave each of us about 10 pounds of fish to take home - plenty for four or five meals for our families. 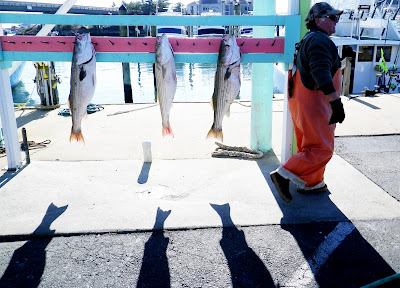 There are countless ways to prepare fresh caught striper, I've talked about this before.

The "shoulder part" of the fillets were thick enough to cut into little steaks.  I'll put some of those steaks into the oven tonight, roast for a few minutes, flip them over, add a pinch of parmesan and panko on top, then broil for a minute or two.  Served with smashed potatoes, roasted grape tomatoes and asparagus tips, it should make for a nice dinner.

Nice, Steve. Grape tomatoes are the only tomatoes worth eating this time of year.