I may well regret this.  Not the sailing a tall ship, that will be fun.  It is the twitter account I'm talking about.  But it is part of the deal for hopping on the Picton Castle and heading down the coast. 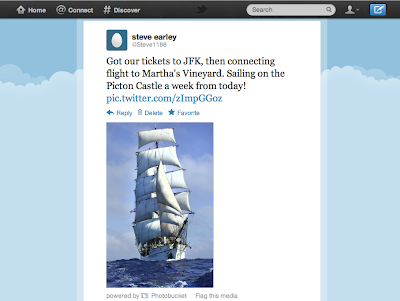 I hope to be posting here, when possible.  But I'll also be doing some tweeting (never thought I would be saying that).  And I'll be posting to another blog, which I will link to here at some point.  Much of the time we will be offshore and the only communications with be via BGAN, which is another name for a satellite phone.  And satellite phones costs money.  So how much I will be posting, where I will be posting, is something I will have to work out over the next few days.

Just for fun I am going to tweet this post.  How will it look when it is tweeted?  I guess we'll both find out.