The wind had swung from southeast to northeast overnight. I woke to a great breeze, had breakfast and sailed off the anchor. I had plenty of time to explore on the last full day of the trip. I decided to head east close-hauled towards Bluff Point. I had sailed near the area three times on past cruises, twice on solo sails and then last Spring on the Skeeter Beater, but I had never really taken a close look. The water was calm in the lee of the Gull Rock Wildlife Management Area but the wind was great. I headed into the rising sun at 5.5 knots. 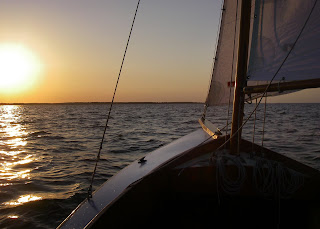 I reached Bluff Point by 7 then hove to and tucked in a reef for the downwind run. I sailed straight across West Bluff Bay then curved up into Cunning Harbor Bay to sail along the marshes. I slowed as I past Cunning Harbor Island, on google earth it appeared to be a sandy island and I had thought of beaching Spartina to take a few photographs. But it turned out to be a marsh island, no place to land so I kept on going.

I took the photograph of Spartina's cockpit, below, to show how it looked after four days of sailing -- pretty much the same as the first day of sailing I'm very happy to say. Bruce and I had developed a routine of keeping everything in its place - it really makes life much simpler on a small boat. 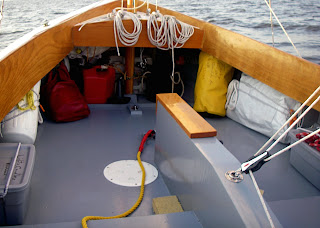 Passing Juniper Bay point I turned up north, once again under mizzen and jib, and skirted the eastern shoreline of the bay. I started down south at Laurel Creek and headed north until I reached the beautiful Buck Creek. I don't know why I enjoy sailing along the marshes so much, maybe it is a case of simple things for the simple minded. But they always looks so beautiful and peaceful to me.
After reaching Buck Creek I raised the main and headed due south back towards Great Island.
But before reaching the island I turned west onto Swan Quarter Narrows. Great sailing under mizzen and jib and reefed main - I hit 6.5 knots, probably the fastest speed for the trip on that run. I eventually entered Swan Quarter Bay and crossed the mouth of Caffee Bay to a tiny little cove where I ran the bow of Spartina up into the marsh and dropped the anchor for lunch. 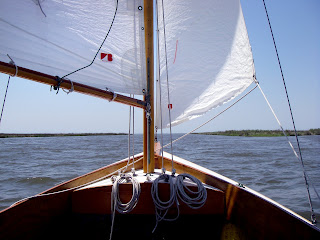 After lunch I crossed Swan Quarter Bay and followed the markers to an unnamed cut across Bell Island. Bruce and I had gone through this same cut last year under distinctly different weather conditions. This time it was sunny with a nice breeze out of the east. I ran wing and wing through the cut against the tide (above). Halfway through the breeze fell off and I was making less than a knot, but then the wind filled in and I made it through. This was the first of three cuts I would pass through that day. 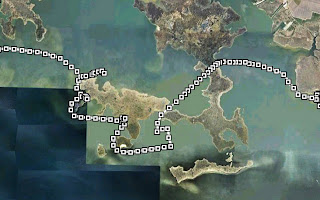 Sailing through that cut put me in a direct line for Shell Bay Cut on Judith Island a little over a mile away. I swung Spartina to a broad reach and entered that cut, also known as Bernice Creek, under a rising wind. After a couple of tacks across Shell Bay I turned downwind south of Judith Island, jibed and passed through Judith Narrows. What a great ride all of that was. Once through Judith Narrows I skirted the shores of White Perch Bay, Tolers Bay and a third bay all the way at the western end of the island. 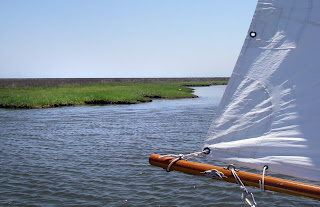 I anchored in that third bay (I could never find a name for that place) and relaxed for a while. It was probably the prettiest cove I visited all week. The wind was picking up all the time but I was protected by the marsh and a few small trees. In those wind conditions it would have been a great place to anchor for the night. But the wind was forecast to swing from the southeast to the southwest. So I sailed around the back of Judith Island to Deep Bay and took a look at a couple of coves on the back side of the island. 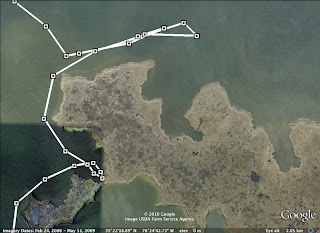 I made a couple of passes off of Drum Bay and Middle Bay. On the satellite photos they looked to offer great protection, but looking from the water I wasn't impressed. I don't know why, but they just did not look like great places to deal with the changing wind.
The wind was picking up, as it typical in the afternoons, and that was as close as I got to heavy weather sailing (below). 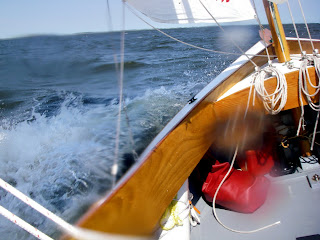 Not satifisfied with any anchorages there, I dropped the main and sailed under mizzen and jib across Rose Bay and Spencer Bay reaching a little creek just on the western side of Spencer Bay. This was very near to, or possibly the same creek, where Bruce and I anchored last year. On that trip we had a little problem with mosquitoes, but on this trip - with all the wind - I did not see a single bug.
Bayside Marina was just a few miles to the north and I could have made it back in less than an hour that evening. But I wanted a chance to relax, finish my book, have a nice dinner and enjoy one more night under the stars.
31.3 nautical miles
2.7 moving average
9 hours 3 minutes moving time
steve
Posted by Steve at 8:13 PM