Day One - Germantown to Mouse Harbor 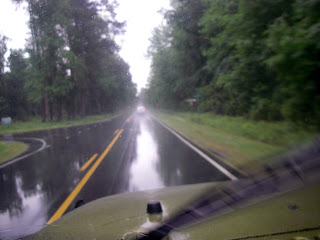 "You sure can pick the weather" said Wally at Van Horn's Bayside Marina when I arrived in a steady, light rainfall for the Weekend Walkabout. The rain had started about halfway down the three hour drive south on Hwy 17 from my house to Germantown, NC. Sometimes light rain, sometimes heavy, it was par for the course. Of the six cruises on Spartina three have started in bad weather. But this was just the tail end of a front moving through, nice weather was the forecast for the next few days. 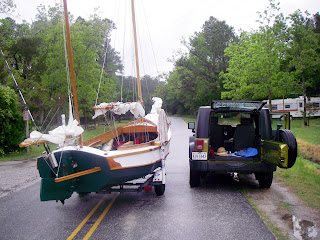 I paid the fee for launching the boat and storing my jeep/trailer at the marina - $10 - then rigged and loaded Spartina right on the road that dead-ended into the ramp. Kevin, a local waterman, drove by in his pickup truck with tubs of menhaden in the back for his crab pots. Soon he walked on over to take a look at Spartina. He really like the design, but then again he is not the first person who makes his living on the water to admire the lines of a John Welsford boat. He asked about the rigging and construction of the boat, gear used for camping and my plans, all the while nodding with approval. He even helped transfer the food and equipment from my jeep to the boat, both of us running to the shelter of a nearby porch when the heavy rains came in.
Just about 11 a.m. I backed the jeep down and put Spartina in the water of Germantown Bay. I motored down the channel and raised mizzen and jib at Marker 9 with a light wind out of the west. At Marker 7 I raised the main and felt the pull of the sails as I headed south at 4.3 to 4.6 knots. By noon I was on the south end of Spencer Bay, not too far from where Bruce and I had anchored a year ago on the Skeeter Beater trip. Soon I passed the tiny islet at the mouth of the bay and entered Pamlico Sound. It felt really good to be heading out on the open water.
Below is Spartina loaded for a five day cruise. All the gear and food with plenty of room left over. 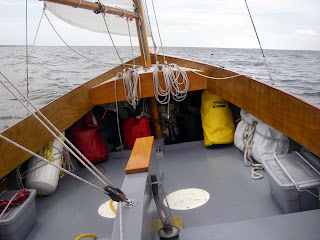 It was an easy sail across the mouth of the Pamlico River with wind on the starboard beam. I moved along at just over three knots until I passed Pamlico Point and turned up into the wind, making 5 knots as I sailed across Mouse Harbor. Below is my gps track from part of that first day, sailing up into Long Creek at the north end of Mouse Harbor and ghosting along the marshes under mizzen and jib. That was one of my goals for the trip, to skirt the marshes and explore the tiny bays and creeks along the way. You can see where I doubled back for a second pass. I spotted of school of puppy drum "tailing" along the edge of the marsh grass, feeding with their mouths digging in the sand while their coppered colored tails poked up out of the water. I made a few casts right into the school but could not get a bite. About 30 yards away I cast into what looked like empty water only to get a hit so strong and quick that it was over before I could set the hook. But that's fine, I was just happy to be there exploring the coast. I continued south sailing just yards off the marsh, enjoying every minute. 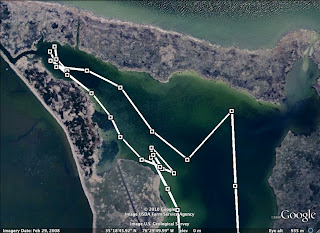 I passed Flat Cove, Hog Cove, House Cove, took a look at Cedar Creek where I had ridden out some rough weather a couple of years ago and then headed into Island Creeks to see what was there. I dropped anchor in the creek, fixed dinner and readied the boat for the night. Below is a photo from after dinner, you can see the bivy set up in the foreground and me enjoying my book. Life was pretty good. 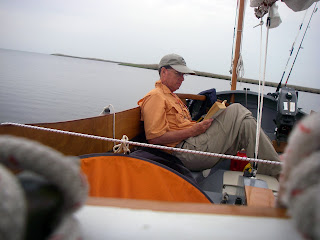 It had been overcast all day, rain in the morning and just a glimpse or two of blue skies in the afternoon. But just at sunset the skies cleared to the west and the sun dropped down beneath the clouds. They always say "less is more" and maybe I should just put one photograph from that evening here. But it was so pretty, such a nice way to end the day, I'll put three images below. ( I've got to say I'm very happy with the colors that the little waterproof Pentax Optio W20 picked up that night.) A very nice evening and a great way to start the trip. 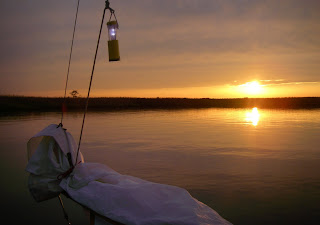 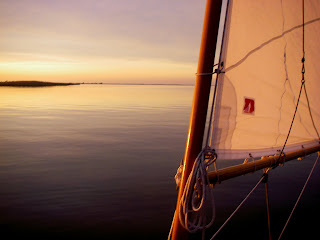 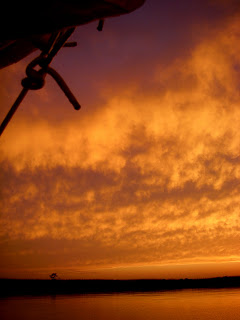 15.5 nautical miles
2.6 knot moving average (this is lower than a typical cruise as I spent so much time "ghosting" along the marsh)
5 hours 50 minutes moving time
steve
Posted by Steve at 12:16 AM

Steve - what a sunset! Thanks for these. Every picture is an inspiration ... and an instruction, as I peer carefully at all the building details. Welcome back!