DAY THREE - Downwind across the Sound

I was up at 6 to see a beautiful false dawn. All sails up with a nice breeze out of the southwest as I raised the anchor about 30 minutes later. I headed east out of Middle Bay, passed Big Porpoise Point and then turned north as I approached the warning signs for the bombing range. 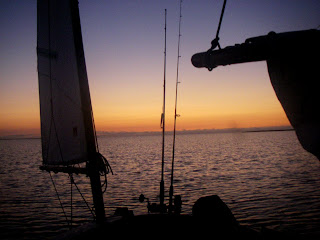 Below is the typical layout on the deck - chartbook, gps and SPOT. The yellow cord is the polypropylene tether that I always wear, particularly when single-handed, out on a cruise. On the other side of the centerboard trunk were my satellite photo and compass. 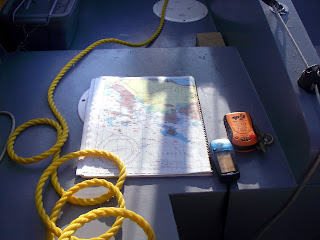 I was heading northeast with the wind out of the southwest - directly behind me. Sometimes I sailed wing and wing, moving along at 3.3 knots. Sometimes I tacked downhill on a broad reach which is, or at least feels to me, a little faster. It didn't really matter, it was a beautiful day and sailing across Pamlico Sound was a lot of fun. I was in no rush to go anywhere. 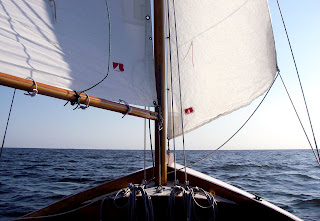 Easy sailing. You can see that I leaned back and controlled the tiller with just the touch of my knee. 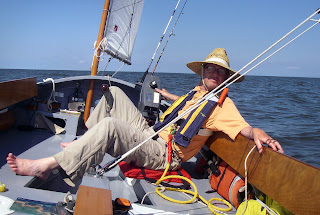 After a couple of hours our on the open water I could pick out the blue water tower at Swan Quarter. Soon I was south of Swan Quarter Bay and watched the Swan Quarter to Ocracoke ferry coming down the channel and turning out into the Sound. 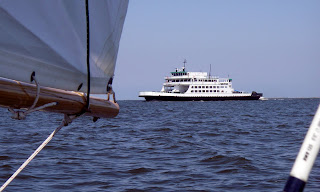 At 11:30 I sailed up to the northeastern shore of Great Island, a spot I had visited on a solo cruise a couple of years earlier, and dropped the anchor for lunch. Usually I eat lunch while sailing, but with this nice little island right there I couldn't pass up the chance to stop and relax for a while. 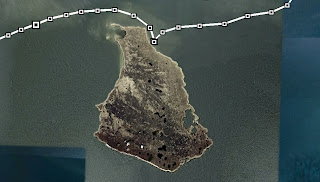 I raised sail and headed north into Juniper Bay, dropping the main and sailing under mizzen and jib along the marsh on the western shore of the bay. I anchored in a nice little cove and cast a lure for a while with no luck. It was a nice warm afternoon with a great breeze. I decided to lean back against the cushion and put the staw hat over my eyes, a few minutes of rest might feel good. Over two hours later I woke up from a deep, deep sleep - boy did that feel good. 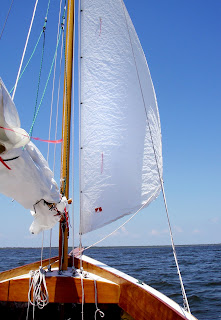 The afternoon breeze had picked up quite a bit during my nap. I sailed back to the mouth of Juniper Bay with thoughts of heading over to anchor behind Great Island. But the wind was getting stronger and the water in Swan Quarter Narrows was very choppy. I could have tucked a reef in and sailed close hauled over to the island, but it would have been a rough sail and I would have gotten pretty wet. Instead I turned back into the bay and found the cove that offered the most protection.
Dinner than night was grilled sweet peppers, sweet vidalia onion and a little single serving of Spam. Certainly not up to Bruce's standards but I didn't hear any complaints from the crew that night. 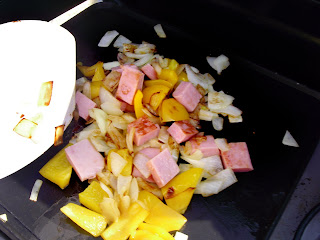 And below is sunset. I've post lots of sunrise/sunset photos already but I wanted to show the choppy water as the sun set on Juniper Bay. I could have anchored in closer shore where it was a bit calmer, but also closer to the mosquitoes. Instead I anchored out off the marsh and avoided the bugs completely. Yes, the water was a little choppy, but after three days on the boat I no longer noticed it. The wind dropped off as the sun went down, another great evening. 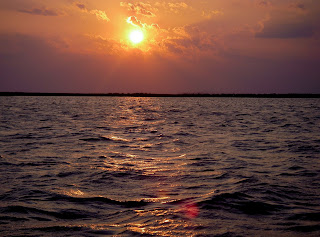 Awesome trip and report. Your stories keep me motivated to finish my boat. When it is done we should do a boat swap. You could use mine in NZ for a while and I could come up and use yours.

Looks like a great trip! I hope I'm as lucky weather wise next week. Looks now like I'll leave out of Sound Park (Harbinger) on the 18th, instead of Englehard (less driving).

Looking forward to seeing the rest of your photos.

I sprang for the Casio EX-G1 for the trip. Hope it works!

Sounds good Brian. Send some photos of of the build and I'll post a couple.
I didn't realize there was a ramp in Harbinger, but you are right it is a much shorter drive. Have a good trip.

I have your blog linked to mine.

Do you take a laptop to upload photos enroute or to you do it at home?