I'm still trying to figure out the calculus of mosquitoes - when, where and how many will there be? I'm learning slowly and got a good lesson on the topic when I woke up anchored in Mouse Harbor on day two. I could hear the mosquitoes buzzing outside the bivy when I went to sleep, when I woke up in the middle of the night and again when I woke up in the morning. It wasn't the typical buzzing of a few mosquitoes hanging outside the bug screen. It was more like surround sound. Not good on a boat that doesn't have a stereo. I was fine inside the bivy, but suspected I would have to deal with the mosquitoes at some point.
The thick fog that night had left heavy dew on Spartina's deck. When I climbed out of the bivy in a cloud of mosquitoes I saw that the wet decks were covered with dead and dying mosquitoes. Thousands of them. I had never seen so many. The white foredeck was almost black with the bugs.
No, I did not take any photographs. I was too busy unhooking my bivy to clear space in the cockpit, raising anchor and cranking up the outboard to get away from the marsh. I ran a couple of hundred yards away, anchored and stowed the sleeping gear. Then I ran out more into the open water of Mouse Harbor and let Spartina drift while I cleaned off the decks. It was really a mess. No fun at all, but my notebook shows that an hour and five minutes after waking up to the hum of all the skeeters I was under full sail. 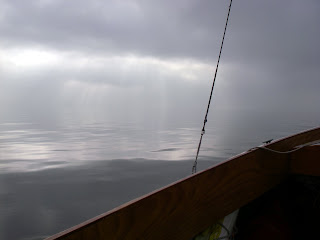 The fog was still thick. I had just learned about mosquitoes, next I would learn about navigation. My goal that day was to work south past Little Porpoise Bay and Big Porpoise Bay to reach Middle Bay and maybe Jones Bay. It would be simple enough, just follow the shoreline out of Mouse Harbor then head south. I had my satellite photos in hand as I sailed and motor sailed (the wind fell off) away from Island Creeks around a point to Voliva Bay and past a second point to Fate Bay. I could see Sound Point from there and knew that just around the corner would be Pamlico Sound.
I was trying to judge the distance to Sound Point so I (finally) took a glance at my gps. It showed that I had already left Mouse Harbor, sailed past Little Porpoise Bay and was halfway across Big Porpoise Bay. Wow, I was miles away from where I had expected to be. In the grey fog, with no rising sun to give me a sense of direction I had lost my bearings and completely misjudged distances. While rounding what I had thought was the point at Voliva Bay I was really passing Sound Point. What I thought were little coves on the shoreline were really large bays. In this case it was no problem. In fact I was happy to be a few more miles into that day's trip. But it was a great lesson for me on navigation and fog. Sure, use landmarks to keep track of your position. But confirm it with that gps. 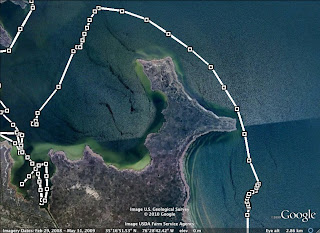 Early that morning while I was pouring buckets of water on the decks to clear off the mosquitoes I had to wonder why I was out there. I got the answer just after 9 a.m. as the skies cleared for a beautiful day and a pod of dolphins playfully swam by Spartina. The bugs and the fog seemed like distant memories and I was having a great sail towards Middle Bay. 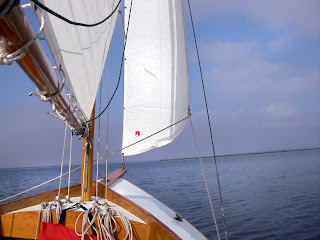 I had a light breeze out of the southwest as I tacked across Middle Bay then rounded Sow Island Point into Jones Bay. The wind dropped a couple of times and I motor sailed until the breeze filled in again. About halfway Jones Bay I could see large sailboats, the snowbird fleet, heading north on the ICW at the very end of Jones Bay. I turned left and entered the north end of Ditch Creek, a pretty little patch of protected water surrounded by marshes on all sides. For thirty minutes or so I tacked back and forth across the creek enjoying the scenery. Working my way to the east I found the entrance to Dump Creek. I dropped all of my sails and motored down the narrow (about 15 to 18 feet wide), shallow (about 2 and 1/2 feet deep) creek towards the Bay River. Though it is called a creek it must have been man-made, it was a perfectly straight cut across the marshes. 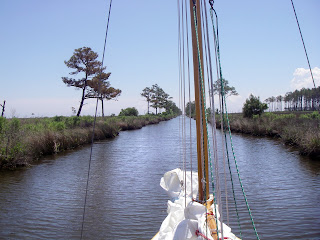 At the south end of the creek, still under power, the marsh opened up into a wide natural creek that led to the Bay River. I pulled off to the side and anchored for a few minutes, then motored out on the river to raise my sails in a building southwesterly breeze. 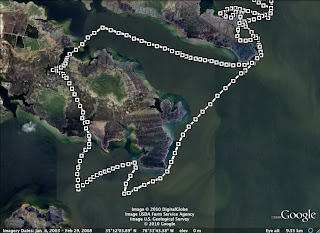 It is common on Pamlico Sound for the wind to kick up in the afternoon and that is exactly what it did on day two. I made a couple of wide tacks across the Bay River and rounded Bay Point back out on to Pamlico Sound, most of that time moving along under full sails at 5 knots or better. This time I was headed north back to the beautiful Middle River. I had just gotten a glimpse of it earlier in the day, now I wanted to go back and explore the shoreline. 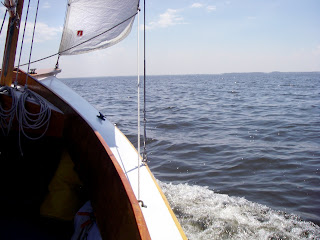 The wind carried me across the mouth of Jones Bay, around Sow Island Pt. and into the Middle River. I dropped the main and skirted along the marshes on a wonderful afternoon ride. 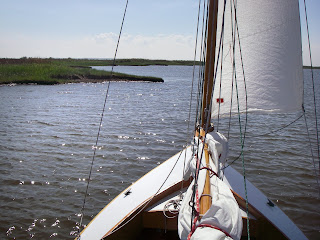 Just before 5 I dropped anchor, fixed dinner and read my book. Below is my view of the world that evening. 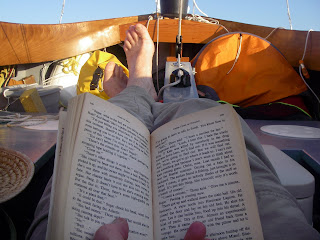 The clouds and fog were gone, a beautiful clear evening with the promise of a bright star-lit sky. And no mosquitoes! 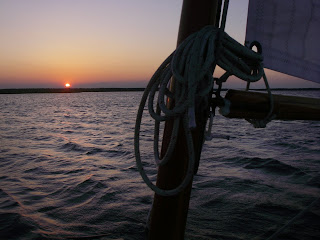 As for the mosquito calculus, here are my new rules....
The higher the wind the closer you can anchor to the marshes.
On calm evenings anchor as far as possible from the marshes.
On calm, damp evenings anchor even farther out from the marshes.
The catch can be on a breezy evening with a forecast of calming winds in the middle of the night. Anchor out as far as possible where you can still get some protection from the wind and the swells. And hope for the best.
(as I have said before, dealing with the bugs is not much of a price to pay for great day on the water)
22.3 nautical miles (for the day)
2.5 kt moving average (that is a running total for the trip, slower than usual because of exploring the marshes)
9 hours 56 minutes sailing
steve
Posted by Steve at 9:15 PM

Many I know recommend the Thermacell repellent when outdoors (http://www.mosquitorepellent.com/) I'm planning to try one in June in our cockpit. Available at Dicks, Walmart, etc...

Regards your navigation, I too make the same misjudgements, all the time. The shoreline never quite looks like the charts or Sat photos. One thing I've found to be helpful is to remember to look behind from where you've come in addition to where your going, this seems to help me in trying to resolve the points and headlands I've passed to figure how it all relates to what's in front of me and my photos/charts.

I'm really enjoying your reports, and am so looking forward to getting out on our Dawn Patrol for some overnighters.

Steve S. from Pennsylvania had recommended the thermacell repellant also. Sounds like it might be worth adding to the equipment list. I tend to be skeptical of those sorts of things, but if you know people that use them then that is a plus.

Thanks for the advice on navigation. I think I was thrown off by both the fog and the distraction of cleaning up after the mosquitoes. I had pretty good luck the rest of the trip when the skies were clear and the sun gave me a good sense of direction. The experience certainly did make me wonder how I would do if my gps failed.

When I was a kid (back before GPS) the watermen I knew got more nervous about fog than storms. I didn't understand why - the fog seemed harmless compared with a squall. It wasn't until I was disoriented in a fog bank myself that I got it.

You can see the storm coming.