day one - a cool breeze

It is a chilly morning.  A cool 53 degrees as I leave the house in Chesapeake before dawn.  Cooler, at 46 degrees, as I arrive in Crisfeld, Maryland to launch Spartina. 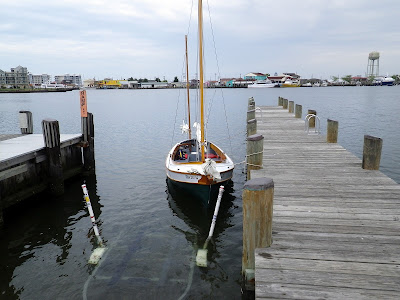 I rig the and load the boat at the Somers Cove Marina, the only boat heading out, it seems, under the lowering clouds and chilly east wind.  I back the boat down the nice wide ramp at 10:40.  Just a few minutes later I cast off and raise sail in the harbor. 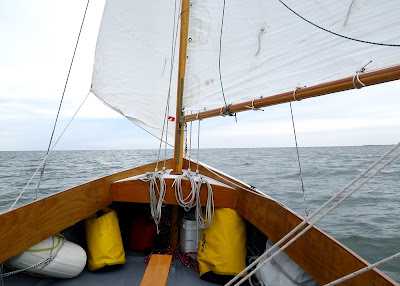 I sail wing and wing out through the narrow passage between the new condos on the north side and the old crab house on the south side.  I hear a man at the crab house yell "Bon Voyage!" as the wind fills in away from harbor entrance.  By the time I pick him out on the docks he has turned his back and is walking away.  I can't tell if he was talking to me or to the waterman in the deadrise that is just now pushing off after delivering his bushel baskets full of crabs.

Sailing downwind on the Little Annemessex River the breeze is stronger that I expected, and the sun starts to break through the clouds.  It feels good to be out on the water.  I leave the river at 11:30 and turn north on Tangier Sound towards Deal Island.  The overcast lowers and the wind cools.  I round up and point Spartina into the wind while I put on an extra layer of clothes and decide to find out if my new Buff protects as much against the cold as it protects against the sun.  It does. 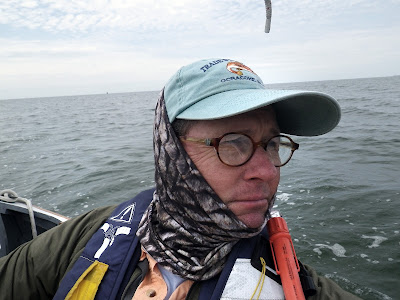 Sailing up the Sound the wind comes and goes.  The shifting wind doesn't help as I try to decide where I want to anchor this first night out.  Deal Island?  Maybe a little too far with this wind.  Hazard Cove?  Not much protection from the waves coming in from the south.  South Marsh Island tempts me.  But in the cool shifting wind it is probably too far for this evening.
I finally decide to turn towards Back Cove on the at the north end of Smith Island. 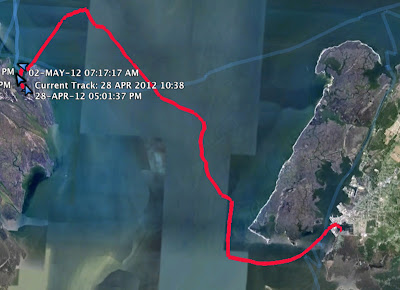 I round a marshy point at 2:30 and enter Back Cove, a power boat pulled up along the shoreline and two fisherman seated in lawn chairs along the bank.  They wave, then one starts fighting a fish and reels in a skate.  I ghost along the marsh and make a few casts with my spinning rod.  I don't fish too seriously, I think instead about the chill and the fact that I had not brought any shoes or boots along on the boat.  I had never needed anything more than bare feet or sandals on any other trip, but I wish I had something for my feet now.  Two American Oyster Catchers, with dark heads and bright orange beaks, watch from a little point on a creek entrance as I drift by. 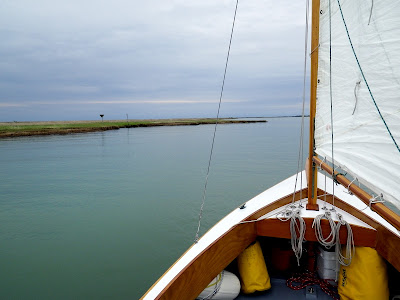 I drop the anchor a little before 4 and grill a potato for a simple dinner.  As I wash the dishes the weather radio tells me the wind will change from the light SE wind I have now to a strong NE wind in the middle of the night.  My achorage is open to the N and NE.  I raise the anchor and motor to a creek a couple of hundred yards away where I will have protection from both directions.  The weather radio also tells me rain is on the way. 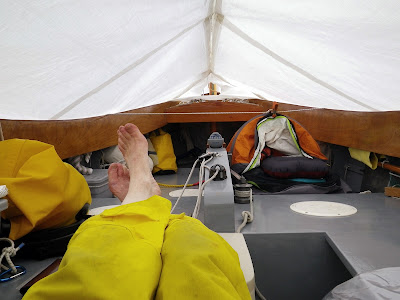 I set up the boom tent, then the sleeping gear.  Still wearing my foul weather gear for warmth, I relax and read a book.
I climb into my sleeping bag early and soon find I am getting a lesson in different kinds of rain.  A light sprinkle, then a few heavy drops plopping down on the tent.  Then a driving rain followed by a steady drizzle.  I fall asleep tucked in the warmth of the sleeping bag and the dry cocoon of my bivy.

In my own little sleeping bag in my own little boat I can be whatever I want to be.
On the wings of my fancy I can sail anywhere and the world will open its arms to me.

That guy was saying 'bon voyage' to the motorboat. People on the whole don't give a crap about sailors.

if anyone said Bon Voyage to me in Plymouth - i'd fall overboard with shock!