I thought I was going sailing yesterday.  The forecast was decent - overcast but a nice breeze and comfortable temperature.  Instead it was cold with a misty rain.  I don't mind rain when cruising but I do not like day sailing in the rain - it is too much effort to dry out the sails in the garage afterwards. 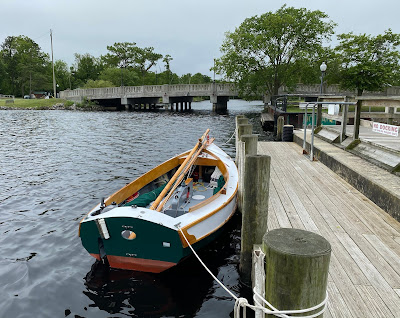 So once I got to Besty town I left the rig down and sails covered, launching SPARTINA for what my Naval Academy neighbor would call and engineering check.  I had replaced the centerboard pin assembly -  an 8 inch 3/4 diameter bolt, a four stainless steel washers, four rubber gasket, silicone tape  on the threads and just under the head of the bolt, two nuts and a lock washer - and wanted to make sure it was water tight.  The key addition, based on advice from Tom Head, was lithium grease. SPARTINA sat in the water for over an hour during which I raised and lowered the cb several times.  No leaks! 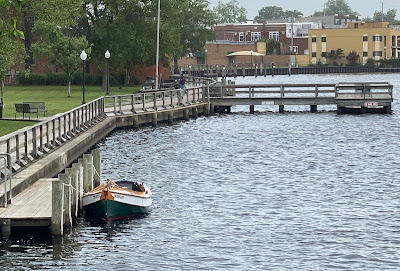 I had also had another neighbor - former Navy submariner (and if you want precision work done find a guy that served on submarines) change out the oil and lower unit fluid in the new outboard.  There had been a quirk with the outboard when idling, it would suddenly rev up.  My guy took that of that with a simple adjustment, and I confirmed by running the outboard several times while tied to the dock.

So all seems well with SPARTINA.  Looking for the next cruise.  Maybe Tangier Sound soon.