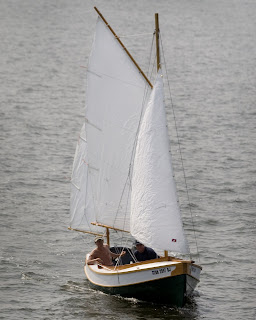 I got a note from Ross asking if I had any photos of Spartina under full sail.  He's building a Pathfinder, you can see some of his work on his blog.  Looks like he is doing some nice work.
I do have a few photos, but not as many as I would like.  I'm always in the boat when she is under sail, so most of my photos have a cockpit point of view.  Maybe on this upcoming trip I'll drop Bruce off on a pier or islet with a long lens and get some serious photos of her under sail.  These photos were made in 2006 when I first launched Spartina (above) and a few days before the launch (below).  I still had not got the rigging quite right, in fact I messed around with the rigging throughout that first summer of sailing.  So in these photos the sails are not set properly, but at least they'll give you an idea of what she looks like under sail. 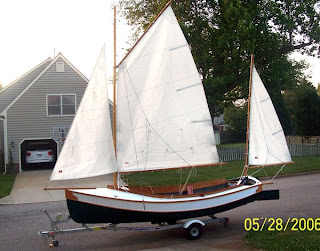 On launch day my brother Mike flew in to town to help celebrate.  That is him peeking from under the jib in the top photo.  As we sailed down the Elizabeth River (a great sail by the way, with the rigging not quite right we still hit almost 6 knots according to the gps) we saw a tall ship coming our way.  It was the  Kalmar Nyckel, the state ship of Delaware (bottom photo).  She was headed to the Hampton Blackbeard Pirate Festival.  On board was a friend of mine with a nice long lens.  He recognized me and shot a few photos, including the one at the top.  A nice chance meeting out on the water that left me with a few photos to remember Spartina's launch day. 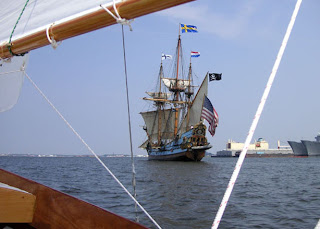 Thanks for posting those pics Steve --looks great. I figured that you might not have too many pics since it requires someone on shore or sitting in a dinghy!

You mentioned it took you a while to get your rigging adjusted -- anything I should know in advance since I'm going to make my spars in advance of finishing the boat?

No, nothing special to the spars or the hardware. The "adjusting" was learning to get the shrouds tensioned properly - I used a synthetic line (instead of wire) and turnbuckles - and learning how to get the main set with the proper amount of curve in it. It is kind of a learn as you go thing.

Steve, I'll get off and take pictures of Spartina under sail as long as you promise to come back and get me! Maybe I'll take a box lunch with me just in case.