This weekend is Harborfest in Norfolk, the big waterfront celebration.  Usually it is held during the first part of June, but since they were rebuilding Town Point Park (below) they delayed the festival to the Fourth of July weekend. 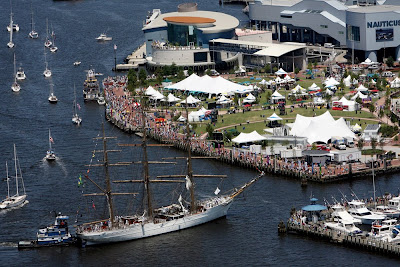 That is the Brazilian Navy's tall ship Cisne Branco  entering the Otter Berth on Norfolk's downtown waterfront.  It was good to see the tall ship again.  Two years ago I was a guest of Captain Leonardo Puntel aboard the ship as she sailed from Charleston, South Carolina to Norfolk.  It was a great trip.  I do love sailing small boats, but to be on a tall ship over 100 miles east of the Carolina Capes was quite a thrill.  The water and sky were both deep blue, the sails brilliant white in the sunshine.  The power of the ship pushing through the the waves was incredible. 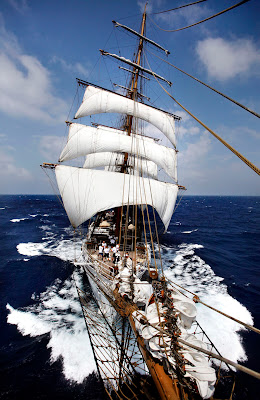 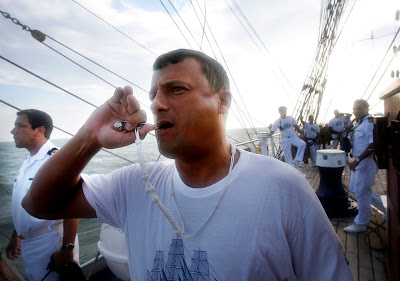 The ship is the Brazilian Navy's training ship, similar to the U.S. Coast Guard's Eagle.  Though it is just 10 years old it is sailed in a very traditional manner.  I remember when Captain Puntel was explaining things to me he would often start by saying "This is a tradition that dates back 400 years......"   Everything from the ship's band playing on deck as we left Charleston on a very windy day (even though there was nobody within miles to hear the band play) to the rope work that the kept the crew busy to passing out small cups of a Brazilian liqueur as we entered the next port a few days later were part of the ship's tradition.  Nobody could sit down for a meal in the officer's ward room until the captain had sat down, and even then it was tradition to ask the captain if we may join him.  Lively conversation was expected from everybody, with sharp questions and stories from all the officers.  And nobody left the table after the meal until the captain announced he was done.  I felt like I was in a scene from Master and Commander. 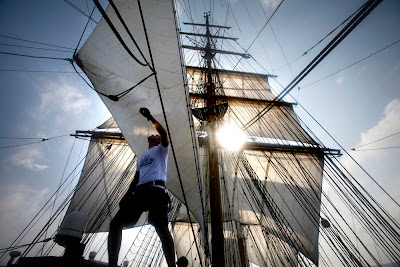 I wish I spoke Portuguese or Spanish, I would have fit in much better.  But they were all very kind and accommodating to me.  And those that did speak English took time to help me understand what was going on about the ship.  It did make me feel good one day when I was going out on the bow sprit and the officer helping me saw that I had put a harness on and  stepped out on the cable beneath the bow sprit before he could explain it to me.  He smiled and said that some crew members mentioned that I knew what I was doing around boats.   The crew had a good laugh a day later when I showed them a photo of Spartina and told them that is where I learned about boats.
The food was just great.  We might as well have been in Brazil.  Meats and cheeses, tropical fruits from the Amazon, thick coffee with spoonfuls of sugar, a mug of beer with lunch to celebrate coming in to port(try doing that with the US Navy).  I made a point of trying (and enjoying) everything they served, even the jello-like breakfast food that Captain Puntel only later explained was made from the bone marrow of cows. 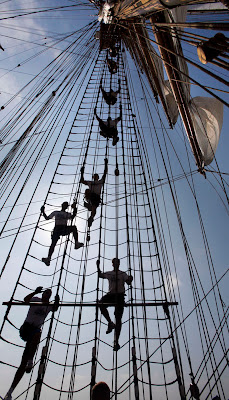 I will drop by the ship today, but as it is a training ship I expect that all the crew members I sailed with are no longer on board.  But it will be fun to look over the decks and the rigging and remember being out on the ocean on a tall ship.  I will never forget the kindness and friendship shown by the captain and crew.  As Captain Puntel told me when I first met him, I was not a guest on the ship, I was part of the crew.  They certainly made me feel that way. 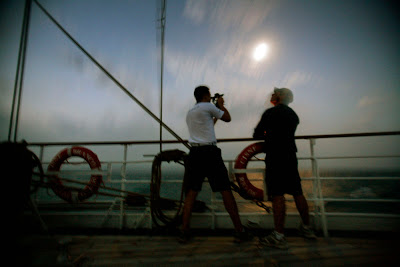 Good to hear from you Perry. How is the Pathfinder coming along? steve