you ought to be in pictures

I got an email from a friend in Maryland mentioned a watercolor rendering "that could only be Spartina" in a boating magazine.  My reaction was "Really?????" 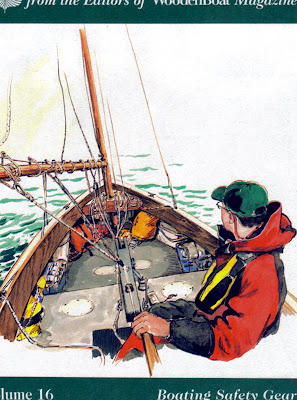 So I go to the bookstore and there it is, a watercolor of Bruce at the tiller on Core Sound in 2007.  Weird.  In the illustration you can see, from left to right, my foul weather gear, the box with the lights/notebooks, boat fender, Bruce's orange waterproof duffel, and (on the starboard side) my yellow duffel, stove wrapped in white polytarp and the cook kit.  Take a look at the photo below and you'll have no doubt that it is Spartina.  I shot the photograph sitting on the transom, leaning back past the mizzen mast 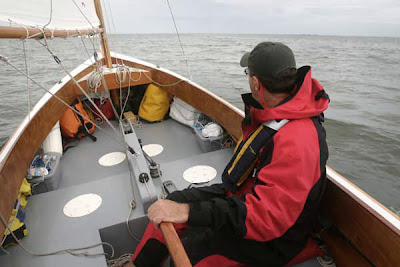 Kinda cool.  But, as someone involved in the publishing business for almost three decades, I wasn't happy.  The drawing was credited to someone I had never heard of.
I sent a note to the editor saying that as a sailor I was happy to see a watercolor of my boat in the magazine, but as someone in the industry I was concerned about copyright issues.  I included a primer about federal copyright laws.  And a bill for the use of the image.
The editor said it was a mistake.  Should not have happened.  Folks were not up to speed on copyright issues.  (Editors and illustrators not aware of intellectual property laws? Really?)
They paid the bill.
Steve
Posted by Steve at 6:21 PM

I see a bbq sandwich at St. Michaels in your future.

As they say here in Newfoundland...
"PROPER TING" Set them straight Steve.