the season is over

Temperatures in the low 30's and strong wind out of the NW told me my sailing season was over this morning. I had hoped to get out for one last sail but it was not to be. I think I made the right call - the wind picked up even more later in the day and it never got above 50 degrees. No complaints here, I had a great year on the water. 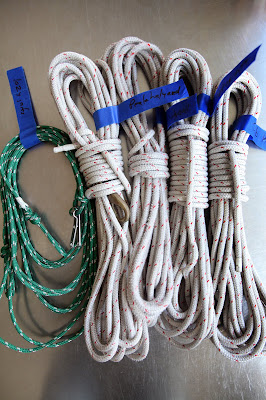 Instead I got started on the off-season work, pulling the lines and hardware off the main mast for a complete sanding, coat of epoxy and re-varnish. It took a while to pull everything off the mast - three halyards, lazy jacks, topping lift and pennant. 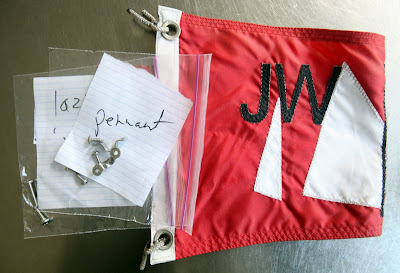 I bagged and labeled everything. I'm very happy with the rigging as it is right now and I want to be able to put it back exactly the same when once the mast is refinished. 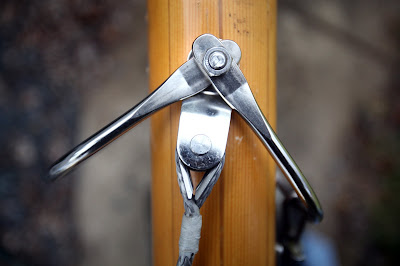 I've had some requests for photos of the rigging. This is about as good as you're going to get. That is the main mast with two 3' boom bails and fittings (I can't remember what they are called) for the shrouds. The boom bail on the right is connected to the forestay. The bail on the left holds a double block that has the topping lift and the peak halyard. 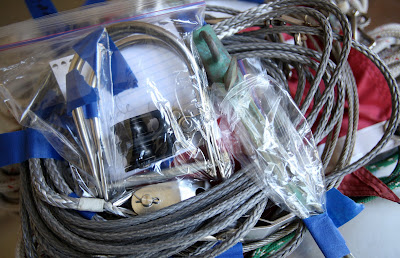 I was a little surprised about the amount of gear on the main mast (it had all been put on there five years ago when rigging for the launch of Spartina and had not been removed since). Out of curiosity I weighed everything and it came out to a little over 6 lbs. The mast itself weighs 27 lbs - the riggings adds quite a bit when you look at the percentage. 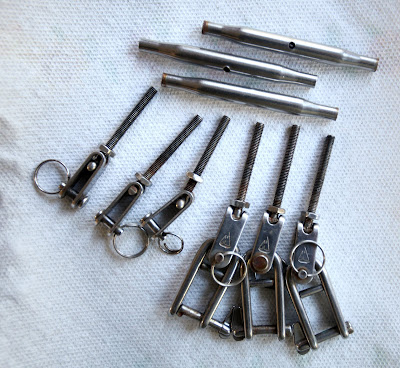 I pulled apart the shroud and forestay turnbuckles, they were building up some corrosion in the threads, and soaked them in DW 40. 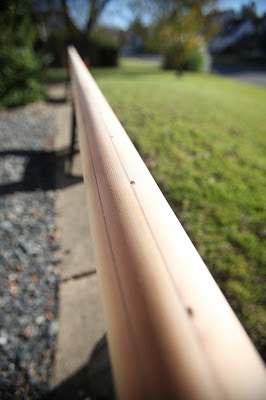 I then went through a pack of 80 grit sandpaper to strip the mast down to bare wood. I'll put on a coat of WEST System epoxy (the hardner I have for the epoxy is five years old and is oxidized - something that does not affect the strength but does give it a nice amber glow) and then add seven coats (with sanding in between) of a good hard varnish. 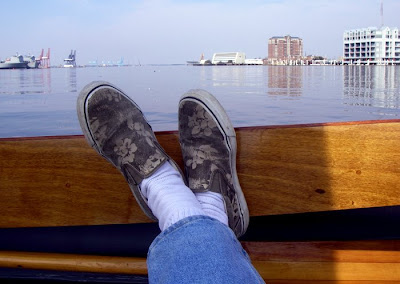 I would like to get the mast done before the first of the year. Then there are plenty of other little jobs to do. I need to touch up the paint on the hull, both the sea green on the exterior and the steel gray on the interior, get the outboard tuned up and check out all the other gear. My earliest sail of the year, above, was March 7 of 2008. I want to be ready to go by the first of March.
steve
Posted by Steve at 7:18 PM

Is that Dave Wagner 40? I'm snifflin right now. Yes, the season's over. We need to deal with it.

WD40 is a solvent, so be sure to coat your turnbuckles with an anti-corrosive (I use a spray grease) to prevent future corrosion. If they are left clean from the solvent treatment they will weather faster next year. Treating them with a petroleum based material may even forestall having to clean the corrosion off again anytime soon.
Wipe excess with a clean rag. A thin coat is sufficient.

doryman,
thanks for the advice, I appreciate it.

No, WD-40 is a water dispersement, not a lubricant. (That's what the WD stands for) Be sure to have at least 10 mil. of epoxy thickness to stop water molecules from penetrating or you are wasting your time and money on epoxy. Also, a minimum of four and preferably 6 - 8 coats of good varnish to finish the job on the mast. Then only a coat every couple of years on the spars to renew. (hard learned lessons) .... Jim
(70 today in Kansas and the pond and the Nutshell are looking pretty good) Oday 26 is in the yard waiting for spring :-)

Jim
WD-40 and I share a hometown - we are both from San Diego, born about a year apart. WD-40 was developed for water displacement in the aerospace industry. It took the developers dozens of attempts to come up with the correct formula. The 40th mixture worked. And that is where the name came from.
While it was developed for water displacement, some of the aerospace workers realized it also worked as a solvent and started using it around their homes. Eventually it was put in a spray can and sold at hardware stores as both a water displacement and a solvent.
After using it, I'll coat the turnbuckles as Doryman suggests.
I do agree on your epoxy/varnish approach. Hope to get the epoxy work done this weekend.
steve