Where is the wind?  The reputation for this area is that there is no wind in July and August.  But I have typically found good wind through much of the summer - until this year.  I've been watching the forecast for this coming Sunday for four days now.  Tuesday the forecast called for steady wind nine miles per hour.  By Wednesday it was down to six.  Then up slightly to seven yesterday.  And this morning it is down to two.

Last Sunday the winds started out light, and fell off from there.  That's fine.  I drifted around, cleaned up the boat, talked to some cruisers from Australia, read the paper and took a nap.  I'll have wind next weekend, I told myself.  But maybe not. 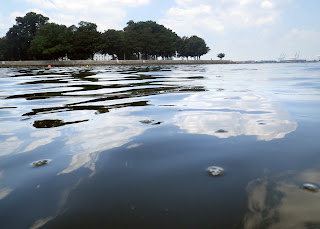 My wife mentioned to me that she really misses our Outer Banks vacations.  I do too.  For fifteen years, sometime between mid-July and mid-August, we took a family week-long vacation to the barrier islands.  Just one of those vacations was on Hatteras, the other fourteen were spent on Ocracoke.
We live just off of the Chesapeake Expressway, the road that leads to the Outer Banks.  Every weekend as we do our errands we share the road with suv's, station wagons and motor homes loaded down with kayaks, fishing poles, lawn chairs and coolers.  In the southbound lanes there are bright cheery faces filled with anticipation for the coming weekend.  Northbound lanes have cars that have been packed quickly, pillows and beach toys stuffed in the back seats, tired looking people steeling themselves for the hours of driving back to Maryland, Ohio, New York and Canada. 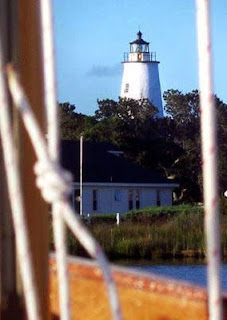 That weekend traffic reminds me of our trips.  We stayed in a house on a canal, the same one for fourteen years.  Our kids grew up referring to the house, called Carolina Winds, as our Ocracoke house.  But it was of course just a rental of course. 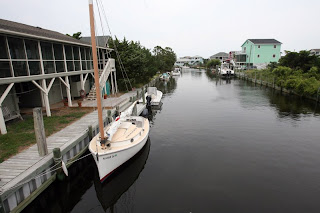 We planned for the Ocracoke trips just like I plan for sailing trips.  We would start discussing possible menus months in advance.  We had our favorite meals - greek/thai shrimp on angel hair, prosciutto and pasta dish with thin slices of hot pepper and crunchy slices of garlic, crawfish crabcakes and a "steamer night" with locally caught clams and shrimp - buying much of the food, save for the local seafood, and bringing it with us.  Wines were carefully selected, as were chocolate toppings for ice cream sundays to be eaten on the top deck of the house at sunset.

We would bring along a stack of books too, each of us going through three or four books during the week.  When I look back at my list I favorite books I notice that many of them were read on Ocracoke.  I wonder if the books were really that good, or maybe it was reading them on the island, during an afternoon break between visiting the beach and sailing, that made them seem so good. 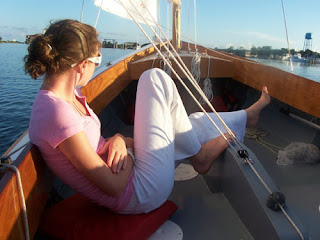 We had taken my last boat, also called Spartina, to Ocracoke several times.  But the new Spartina made it down to Ocracoke to sail just one time,  it was the first year that I sailed the Pathfinder and the last year that we made our annual trip.  The girls had grown up, started working summer jobs and found themselves with busy social schedules.  We no longer had time to make the annual trip. 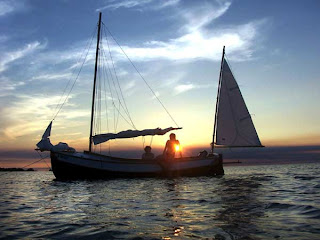 But now the girls are saying that they too miss Ocracoke.  I think we'll try to work our a Thanksgiving trip down there this year, a nice break from college for the kids.  It will probably be too cold to sail so I won't take Spartina.  But the island should be quiet and peaceful, perfect for long walks on the beach. 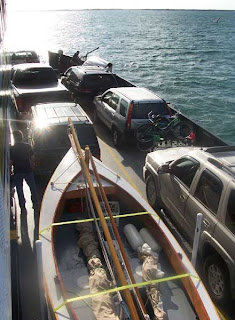 Spartina did pass through Ocracoke one other time since our last vacation there, that was on the way home from the Skeeter Beater.  Bruce and I trailered the boat from Harkers Island to Cedar Island, taking ferry to Ocracoke and then catching the Hatteras Island ferry north from there.  We were on the island just long enough to have dinner with friends.  Spartina arrived and departed Ocracoke on the metal decks of big boats.
Driving to Ocracoke for a family vacation, that's something I'll put on my list.  And sailing there from somewhere on the mainland - Hobucken, maybe - that is on my list too.
steve 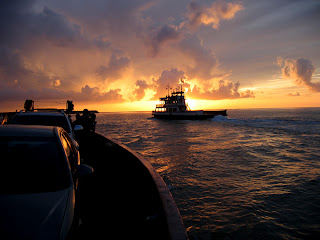 So true about the Outer Banks vacation. All smiles and anticipation on the way down Saturday morning, looking at all the Northbound cars and yelling, "Suckaaaaaaaaahs!"

When the girls were little, the vacations down there were more special, I think. When our younger one was a baby, we'd take the baby monitor with us out on the beach in front of the house when she was napping. We had it down.

Ocracoke is fun and we love it.

New book coming out in a few weeks will blow your mind. It's about a true event that took place there in 1750 that puts Blackbeard's story to shame. It's a wonder the documentation of events survived but wasn't discovered until our neighbor found them by accident.

You'll never look a Springer's Point and Teach's Hole the same. I think this web site about the book will be up sometime this weekend, keep checking;
http://www.treasureislandtheuntoldstory.com
YouTube Video is up now:
http://www.youtube.com/watch?v=bmtdajLMuig

The cat boat in the photo, except for the width, looks like it was made by LBI? Was that your old boat? My wife has a Mystic 10-3 by LBI that really favors it. See photos of Papoose here:
http://snipurl.com/Papoose

Don't forget Manteo in your cruising. We love going there too. We also love your blog.

Baydog, you are right. Vacations with small kids are the best. On our first week down there with our 15 month old we would know she was a awake from her afternoon nap when we heard the word "pool" spoken from the upstairs bedroom. That was her word for all the water off the beach.

JimB, no that is not my old boat. That was the only digital photo I could find that showed the canals where we stayed. I do love catboats.

Sorry, I meant the one about the new book.