Sometimes it is as easy as it looks.

I've stood on the docks at Harbor of Refuge, the commercial marina at the south end of Chincoteague Island, and watched the path of the flowing tide head out to the ocean.  That's the way we would go in Spartina - slide down the channel from Chincoteague, turn south at the harbor and follow the markers out to the Atlantic. 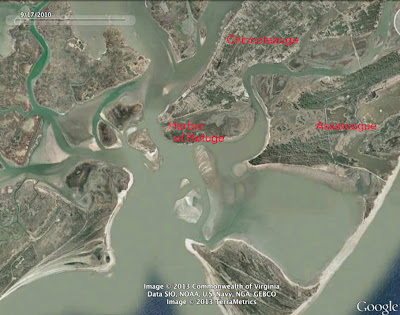 But looking at a couple of different charts and google earth had me confused.  One chart showed the marked channel cutting through Chincoteague Point, the marshy area across from the harbor, and then south.  Google earth showed the deeper channel going behind Chincoteague Point.  But finally the NOAA chart, detail below, shows that the obvious way, the one that I saw standing on the docks, is the right way.  We should have a nice tide carrying us out on the first morning of our trip. 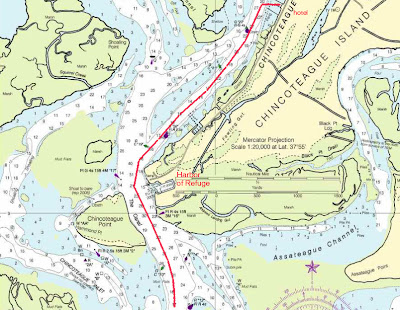 A little more research tells me it was Wachapreague Inlet where Washington Tuttle came inside after leaving Chincoteague.  A Coast Guard website  matches Tut's description.

Searching google earth is was easy enough to find the site of the old station from the description above. The one thing I don't understand is the date, which the Coast Guard site shows was abandoned in 1940.  Maybe that is a typo. 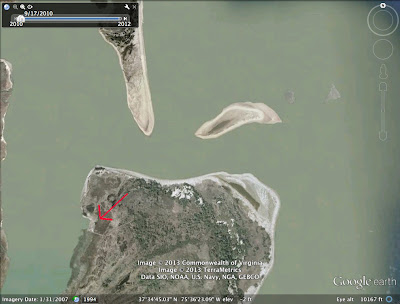 Tut's circumnavigation was, I believe, sometime in the 1970's or 80's and he definitely mentions the Coast Guard Station and talking with the "chief" there.  And I can hardly believe that the military would abandon a coastal station in 1940 with German U-boats just offshore. 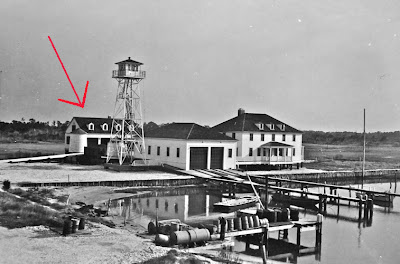 Looking at the google earth image of the old station I can now see that most of the structures are gone.  But the building at the back with the four dormers, the round structure (water cistern??) and a couple of docks still exist.

Maybe we'll tie up at the docks and have a look. 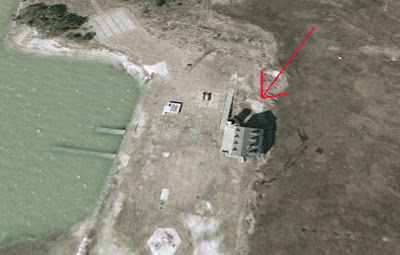