A correction from Tom:  "That's a Virginia-class boat, roughly $3B on the hoof".  Thanks, Tom.

It was nice weather this morning but I was glad to not be sailing.  It gets a little crowded when sharing the river with a nuclear powered submarine and associated protection boats.  In the past I have been chastised for photographing submarines (if being chastised is having a patrol boat with mounted and manned machines guns heading towards you at full speed with a voice coming over a loud speaker saying "by order of federal law put down the camera").  Public affairs folks with the Navy have to me in the past that it has something to do with the antennas, they don't like them being photographed.  This time now such interaction.  Pretty cool to see it.  My guess it is a Los Angeles class attack submarine (Tom tells me is is a Virginia class), and no doubt it was heading to the dry docks on the southern branch of the Elizabeth River.
---------------------------------- 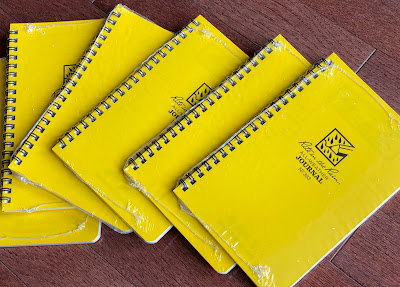 My only Black Friday purchase arrived today.  Six Journal No. 393 Rite in the Rain notebooks.  I can't remember how I heard about it but they had a pretty good discount going and free shipping too.  Six notebooks, how many cruises is that?  Can't wait to find out.
Posted by Steve at 3:44 PM

OK, I think I will not take photos of submarines..

That's a Virginia-class boat, roughly $3B on the hoof... I once had an LA-class sub surface next to us (about 200 yards) right outside the Bay Bridge-Tunnel, in the Chesapeake Channel. I dunno who was more surprised, us or them! No escort boats, no warning, we were just sailing along and up they popped...

Steve: I didn't mean to interrupt your narrative flow with my pedantic correction - but you're welcome, of course. And I enjoy your writing on this blog as much as I love your photos.

In the meantime, to put $3B in perspective, consider that the median family income in the US is aprox $65k/anum. After taxes, maybe $47K. The US budget for FY2020 was $4.79 trillion. So, proportionally, $3B for a submarine is like you or me spending $3. Which is almost exactly what a rubber ducky costs at Target! The Navy just has bigger bathtub toys :)

And a bigger bathtub. On the other hand, I'm thinking about what 3B would come down to per foot.