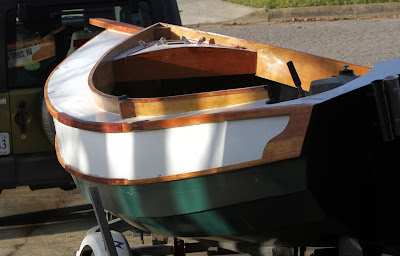 Put the clear coat of epoxy on the rub rails, bow sprit, boomkin and tiller with football on the radio and the dog basking in the sunshine on a surprisingly warm December day.  The hardner for the epoxy kit, which is now over six years old, has a red tint from oxidation.  The resulting epoxy, which has all of its original strength and hardness, now has a nice rich glow to it.  I like the way it looks on the douglas fir and mahogany. 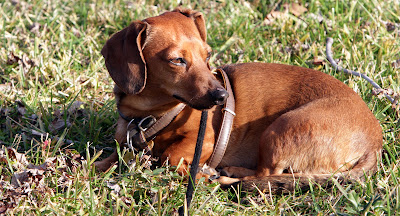 The winter maintenance list keeps expanding, the effort now being more of a refit than just maintenance.  I've decided to strip and repaint the white deck and also the top plank which is also white.  A forecast I'm hearing of a slightly warmer than usual winter should make the painting possible and still be ready for a late February or early March launch.

I do want Spartina to look good to match her new sails.

Well it certainly does seem quite a bit easier when your boat is on a trailer in your driveway, rather than in a slip 90 miles away.... sigh.

I do have to admit that that is an advantage of a trailered boat. I one time I kept a boat in Elizabeth City, NC about 45 minutes away. Maintenance was always a problem for me. steve

So unusual that a Dachshund would be appreciating the warm sun....

not to be a pain in the neck, but how do you know the epoxy is as strong as ever?

I have read in some publications, which I consider to be reliable, that the epoxy retains its strength even as it oxidizes. I've also experienced this first hand - bond two pieces of wood with epoxy, new or old, and and the bond will be stronger than the wood.