coping, the keys, the test

It is winter here in the mid-Atlantic and I have begun my annual efforts to cope with my least favorite season.  Looking forward is one way to cope.  In my case I'm looking forward to the annual striper fishing trip in early January, a trip to San Diego a few days after that, and a brief trip to Florida in February.  Mixed in with all that will be the winter maintenance on Spartina.  The deck is painted.  I still need to varnish the rub rails and paint the top plank, which is white, on both port and starboard.  And then the hardware needs to go back on.  Then - at some point - the new sails should arrive. 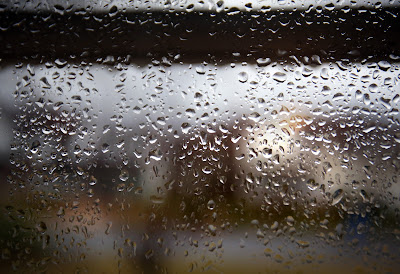 I also cope with winter by sailing vicariously on other people's adventures, in this case an open boat sail from Key West to the Dry Tortugas by my friend Mike, below, and Kevin aboard Kevin's Marshcat "Little T".  Mike, who I see now and then at the Great Chesapeake Bay Schooner Race and the Mid-Atlantic Small Craft Festival, sent me a rough draft of notes about the trip.  Below are a few paragraphs from his notes.  When it is published in full I'll put up a link to the log here.  I am quite happy now to read of light breezes, crab pot markers leaning in the currents and nice little anchorages. 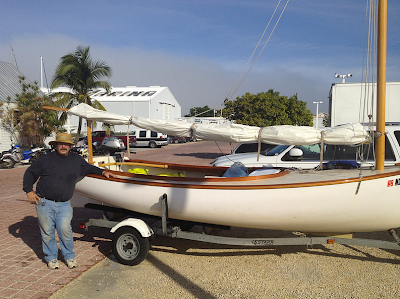 "In a light breeze from the NorthEast, we rounded Key West and were swept down on Kingfish Shoal by a strong South going current.  We just barely missed the shoals around  Cut “A”  Range Markers but, by reading the water, worked North enough to fetch the gate South of Mule Key that begins the Lakes Passage. There’s lots of shallow water on Lakes Passage, but it is mostly fairly uniform in depth except for Gates off Mule Key, Archer Key, and Boca Grande, and the channels are well marked and easy to see. There was quite a crowd on the protected beach on the northwest corner of Boca Grande Key, mostly high speed flats fishing boats, nosed up on the beach. We entered Boca Grande Channel in a light Easterly with deceptive visibility. We approached Gull Rocks and were within a mile and a quarter without seeing any sign of the Marquesas, although they are quite large and high. Then the fog lifted and there was land everywhere to the North of us." 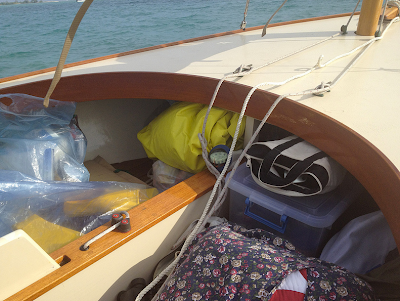 "Beautiful day for the big push, wind southeast and mild, Rebecca shoal abeam at 0930. More than halfway to our destination. At 1100 we sighted YANKEE FREEDOM III, the daily ferry from Key West, passing to the north of us. We had both my Garmin 76 Cx and Kevin’s more basic GPS. Either set had plenty of information for this kind of trip. We just kept adjusting for tide, observing the set on passing crabpots and the plot on the little screen. By 1230 we had made landfall on Fort Jefferson, then the lighthouse on Loggerhead Key, then East and Hospital Keys. By 1330 we were anchored off the dinghy beach in the Garden Key anchorage, a bit tired of our own cooking, rushed for our wallets and waded ashore to buy our lunch from the ferry. A fifty mile passage at 4.8 knots, moving average. We were glad to have left early and were halfway." "We caught a whisper of Southeasterly through an intricate channel into Mooney Harbor and sailed as far as we could around the harbor, a chance to breathe now we are down off the mountain. Once we had found all the parts of that sector that we could float in, we went outside and found a nice beach to swim and explore off the boat for a bit. In the interim, the wind had picked up rapidly and we used the chance to tuck in a single reef on the beach. A fast crab across Boca Grande Channel brought us in a little North of Boca Grande, and we found the lakes passage a little too shallow for upwind work with any centerboard, so we ran off to the north and searched for an anchorage. First we tried Cottrell Key, off the Northwest Channel leading into Key West, but there were dive boats and mooring balls, so we figured they didn’t want any catboats interfering with their diving. We crossed the middleground and found a nice little anchorage just off Fleming Key with company but nowhere as much company as you would find there in February, when the snowbirds had had more time to really flock South."

Thanks for passing on the notes, Mike.  Let me know when and where the full log is published. 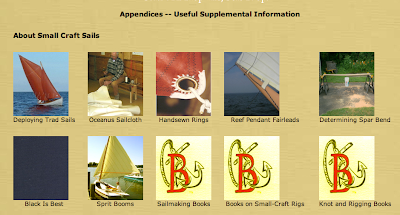 I received a note from Stuart at Dabbler Sails suggesting I perform a mast bend test on Spartina's free standing mizzen mast.  Stuart incorporates the bend of the mast into the design of the sail on that mast (talk about attention to detail).  The instructions for the test, plus a lot of other interesting information, can be found on Dabbler's Appendices pages.

Hey, if you're getting a little bummed because you're running out of things to paint and varnish, I can help you with that. Just a little trip up to Mathews County and I can show you a boat with all kinds of stuff needing paint and varnish... I even happen to have the keys for it.

That is interesting, Jim. Is the mast a bird's mouth mast? Is it hollow?

Yes Steve it is. Since it was unstayed I used clear fir on it. I forget the taper I put in it but it is not very large a diameter and built to Johns plans. It is hollow with three solid blocks at fastening points. I'll mortise a sheave at the top for the halyard when I get to that point. I was concerned but Stuart said it was fine.