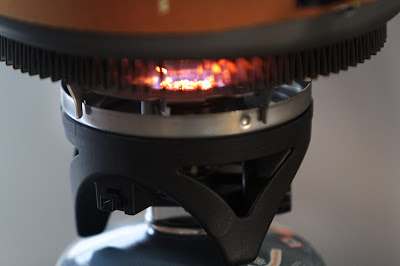 I tried out my new JetBoil GCS (group cooking system) today.  A cup of water was the only item on the menu, it took about two and one-half minutes for it to boil.

I've have heard for years about JetBoil Flash cooking systems, but mostly for boiling for coffee or tea, or maybe even soups.  I just recently noticed the GCS which includes a 1.5 liter pot and a stand to stabilize the unit.  Everything nests inside of the pot, so it doesn't take up much room. 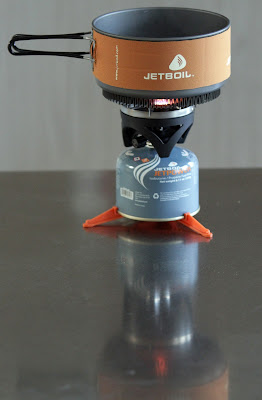 On single handed sailing trips I've been going more and more to single pot meals.  Cooking everything in one pot is quicker, simpler and easier to clean up afterwards.  But even then I still had to deal with my Coleman stove - getting it out of its bag, setting it up, cooking, then breaking it down and putting it all away.  This should make the single pot meal even simpler.

While it is called a "Group" cooking system I don't see how it could feed much of a group.  I doubt that Bruce and I could get a "filling" dinner out of the small pot.  But for one person it seems just right.  We'll still use the Coleman on Spartina when Bruce is along - dinners tend to be a little more elaborate when Bruce is along.  But when going solo I'll leave the bigger stove, griddle, and all that stuff at home.

I did worry about the stability of the vertical cooking system in a small boat, but Webb Chiles (who uses a JetBoil to heat water) tells me that he used to sail Chidiock Tichborne, his 18 foot open yawl, while steadying a gas camp stove with one hand and holding the pot with the other hand.  And that was while sailing on the open ocean.  If he can do that, I suppose I can do alright with the JetBoil in a quiet cove off of Pamlico Sound.

The stove, I should point out, is an early Xmas gift from my Mom.  A great cook herself - she always makes sure I get a good meal one way or the other.  Thanks Mom!

my first thought on taking it out of the box was "wow, this is light", equating light with cheap. But then I realized it was designed for backpackers and needs to be light.
I have friends who have used these to make coffee for years, and they are very happy with them. I'll try a few meals in the pot soon. I'll let you know how it works.

I hope you and the Arwen family have a great holiday. best wishes

It actually works all right for a "group"; we used it for a two-week trip down the Baja peninsula for a family of four. We first got the JetBoil for quicker coffee with the French Press attachment/lid, but realized that life was too short for french press coffee, even camping, and now use it to boil water for an Aeropress instead.

But... the GCS will happily steam 2 batches of the local clams, with a little wine and garlic, for the 4 of us, then switch duty for 2 batches of (prepackaged) Pad Thai - all within 15 minutes, and still with only 1 pot!

Best part was we used just 1 gas canister the whole trip, at least coffee and 1 meal a day.

Local clams, can't go wrong with that! And I'm glad to hear about the fuel consumption. I'll start experimenting with meals soon. Thanks, Mike.

Steve, didn't mean to deceive - that was 2 batches, cooked one at a time, although as you noted it took little time to reach cooking temp. Still, we have six canisters from an original batch of ten in the basement.

Best part about the clams was that we found them ourselves, simply by filtering our fingers through the sand bottom. A gringo local taught us that, and loaned us a mesh bag for the haul.

Bring an extra canister for yourself - we had air temps of 105°F to help us on our way in the evenings!