"Gorman's Jumbo" oyster, wild caught* on Hungars Creek on the eastern shore.  More about that in a minute. 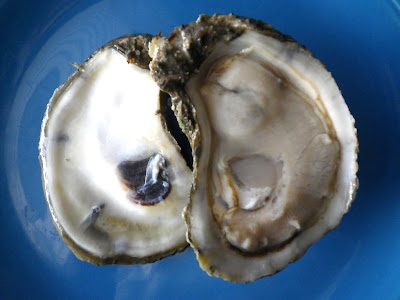 The paint scraper drew first blood this morning before I even had it out of the packaging.  Sure, there was a warning to watch out for the sharp blade, but I did not realize that the blade was sharp on all four side.  A few choice words and a couple of bandages and I was back to work. 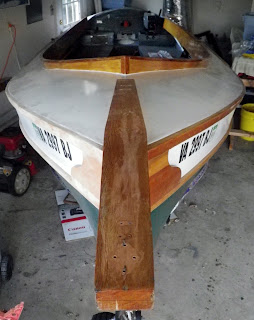 The paint scraper worked perfectly, peeling off the seven or so coats of varnish, the same coats of varnish that were clogging up the 60 grit sandpaper in no time yesterday.  Today I scraped the rub rails on the starboard side, then sanded down the epoxy to get to the bare wood.  I'll do the port side tomorrow.  I've never liked sanding, but found it much easier with ribbons of varnish already laying on the driveway. 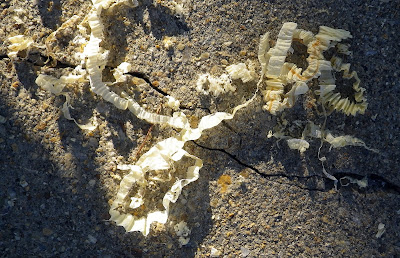 I felt so good about the progress that I expanded my winter goals.  I removed all the deck hardware, with no. 8 to no. 12 silicone screws coming out of the deck very easily - a testament to the benefit of bedding the screws with silicone sealant when I put them in years ago. 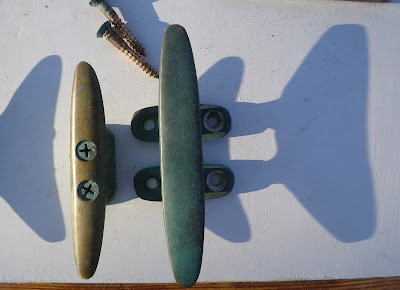 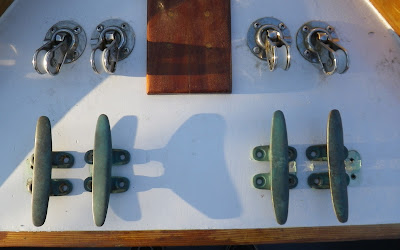 As for the oysters, it was a nice fall day with a hard frost in the morning, clear skies and a comfortable warmth from the sun in the afternoon.  A perfect day for my friend Dave's (see his blog here) Baydog Oysters.  So I drive to see my shellfish dealer Chuck at Uncle Chuck's Seafood at the Virginia Beach Farmer's Market (facebookers can find his page under "Uncle Chuck's Seafood).  He's got a pint of shucked standard oysters waiting for me.  But I always pick up some oysters in the shell to add to the shucked or just for an afternoon snack.  I ask for six Sewansecott's out of Willis Wharf, farm raised oysters from beds just inside the barrier islands.  So salty and sweet they taste like the ocean.  Chuck said he doesn't feel like counting out six oysters, so how about a dozen for the price of six.  Well...ok, I can deal with that. 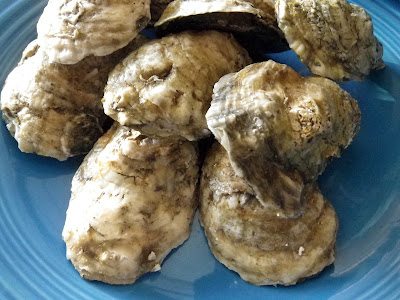 But then he starts talking about Gorman's Jumbo oysters out of Hungar's Creek on the bayside of the eastern shore.  He was getting them in bags of a hundred, but they were so big it was hard to lift the bag.  Now he's getting them 50 count, a heavy but reasonable bag to carry.  I'm fine with what I got already, so I say thanks very much and head out the door.  "Ah, hell" I hear him say and he comes running out with a handful of the jumbos.  "Just wanted you to give them a try" he says with a smile. 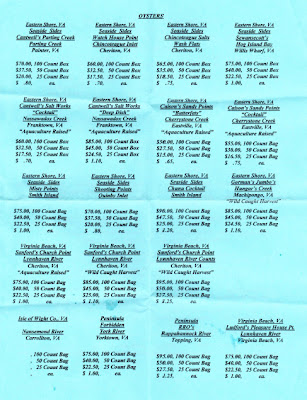 I remember it was just a few years ago that Chuck was thrilled to offer six different brands of oyster from Chesapeake Bay. ( There really is only one kind of oyster here, Crassotrea virginica, but that same oyster raised in different waters - seaside, bay, river, salty, brackish, etc - develops a different taste and texture, so each oyster farmer gives it a "brand" name.)  Now his menu has a full page of oysters and you gotta love the names....Chincoteague Salts, Sewansecott's, Cantwell's Cocktails, Butterfats, Misty Points, Peninula Forbiddens and RRO's to name a few.  There is Chuck's oyster "menu" above.  Yes, there is one open spot on the page, but he jabbed his finger at that and said "I've got some comin' from Mobjack Bay that will go there."

So a good day of work on the boat, and dinner came out great.  Thanks, Chuck, for the oysters.  And thanks Baydog for the recipe.

*as for the "wild caught", every time I see that phrase I picture a waterman running across the an oyster reef wearing his white rubber boots called Wanchese slippers, chasing a "wild" oyster..... but I don't think it really happens that way.....

There's nobody that makes me more jealous you, Steve! What a menu! Any oyster ending with the word 'salts' is always superb.