I did a little research for the upcoming weekend walkabout. My first anchorage should be Mouse Harbor on the south side of the Pamlico River entrance. I anchored in there a couple of years ago, the fall of 08. It is a large bay, measuring about three miles (north to south) by two miles (east to west). Now that I have looked at it on a series of charts and maps - google earth, google maps, GMCO waterproof chartbook and Top Spot waterproof chart - I see that it is really a series of small bays and creeks. I can't wait to explore it. No single map has names of all the places so I compiled them all on the satellite photo below. 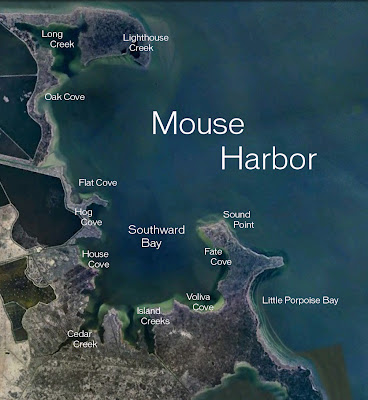 Several of the place names must be pretty common, I can guess there are at least a few Cedar Creeks and Lighthouse Points up and down the coast. But Voliva Bay, Fate Cove, Flat Cove - what is the story behind those names? I'll probably never know. But as you can see it is a coastline well worth exploring. I hope to get there early afternoon on the first day and sail along the marshes and beaches. There are several spots that would provide great anchorage for the night. And with google earth I can pick out a few places with hard bottoms (as opposed to sand or mud) that would be nice spots for fishing.
Below is a photograph from my favorite way to explore along the edge of a marsh - under mizzen and jib. You can see the jib up forward, the mainsail tied tight to the boom. You can't see (but it is there) the mizzen, giving Spartina a nice balance in the wind. I can stand in the aft end of the cockpit, rest my arms on the main boom and control the tiller with a nudge of my foot. On the day I shot this photograph I was sliding along the marsh of Wysocking Bay in 15 mph wind out of the southwest. Very relaxing. When I wanted to stop for a while I took my foot off the tiller and Spartina turned up in to the wind and nosed up in to the marsh. 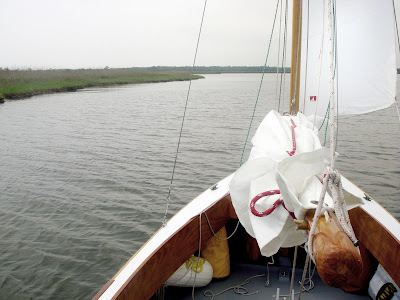 Below you can see Mouse Harbor at the junction of the Pamlico River and Pamlico Sound. It is very isolated and quiet. I did not see another boat while I was there.

But I did see some other boats getting there. This is one of three large shrimp boats that were leaving Pamlico River turning south into the sound. I was sailing from Caffee Bay to Mouse Harbor and slowed down to let them pass well in front of me. 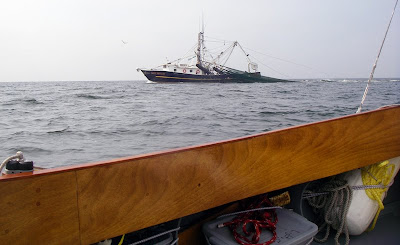 After a relaxing afternoon in Mouse Harbor, I had anchored to read and fish in Cedar Creek at the south end of the harbor, my weather radio when crazy with alerts. A line of thunderstorms and funnel clouds was sweeping across the Carolinas. I moved out to the center of the creek, raised the CB and rudder, left the mizzen raised and read a good book under the boom tent as the storm front passed by. It was a very interesting, enjoyable evening. 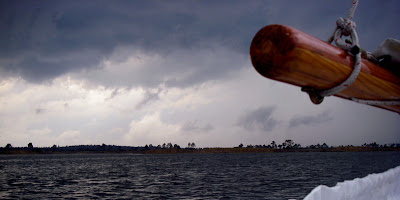 That was two years ago. I look forward to getting back there in the next five or six weeks.
Mouse Harbor will be one of two places I hope to explore on the weekend trip. The other spot is Juniper Bay. I'll do a post on that spot soon.
steve
Posted by Steve at 7:00 PM

Hope you get to Fate Cove and report back on it. I've enjoyed your recent posts. They have got me thinking about how every small place (like Mouse Harbor) can be divided into even smaller places that can (of course) be best explored in a small boat. Enjoy!

Thanks Mary Lou. Hope you get your boat in the water soon. Say hello to Fred.

Hi Steve
I've read you blog for a long time. Especially enjoyed it through the winter to help remind me that spring really would come again!
My boat repairs are under way too (O'Day Mariner #3627).
Looking forward to hearing of your new adventures and creating a few of my own. My goal is to sail on the Pamlico sometime mid spring.
I'd like to talk to you about Englehard sometime.
Sail Ho!
Steve Hock
Bethlehem,PA

Steve
good to hear from you. You can't go wrong with Englehard. As you can tell I'm a fan of both Englehard and Pamlico Sound.
It was almost hot here this afternoon. Spring is on the way.