Looking at the calendar I see that the OBX130 is just a few days away. I had hoped to be part of the fleet but scheduling did not work out for me. Much of their sail will be on Core Sound, south from Cedar Island to Cape Lookout Bight and then back north to the finish. I have sailed Core Sound just once and that was back in 2007 when Bruce joined me for his first cruise on Spartina. 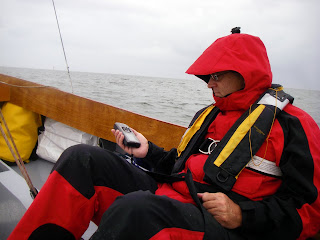 I've got to hand it to him. Two or three decades since he had been on a sailboat and there is Bruce heading out on a 100 mile trip on a 17 foot boat built in a garage (Are you crazy??). We cast off from Harkers Island Fishing Center in a steady rain with thunder rumbling in the distance. I will always remember Bruce's reply to a local who said "You're not going out in that are you???". Bruce looked down at his foul weather gear, looked at the guy and said "Why do you think I'm wearing red pants?" 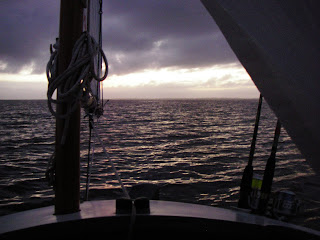 The skies started clearing as we sailed north on Core Sound. We anchored in a spot called The Swash as the setting sun peeked through the clouds. We could hear dolphins surfacing to breath near Spartina. 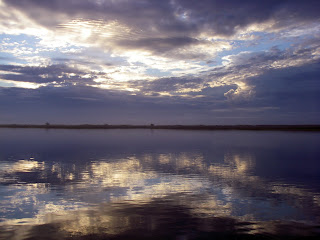 And the next morning was clear and perfectly calm. We motored and then motor sailed north on the sound. I've got to say it was a very pretty place. The mainland was to the west, wild barren dunes of the Core Banks to the east. 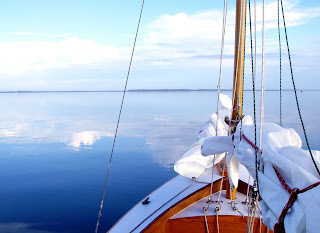 The wind picked up midday and we sailed north on a nice reach. Just east of Rumley Bay a fast moving thunderstorm approached. We thought we had plenty of time before the storm hit us until we saw nearby Lookout Point disappear in a squall. So on went the foul weather gear. 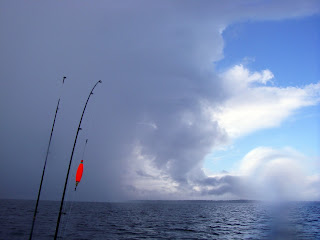 And then a nice evening at Wainwright Island at the north end of Core Sound. That is our foul weather gear drying out on the boom. 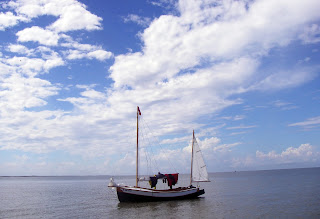 The next day, with light wind again, we headed into the docks (below) next to the Cedar Island ferry. Had a great lunch at the Driftwood Inn on Cedar Island, then headed west across Pamlico Sound towards Raccoon Island and, eventually, Oriental. It was a great trip. 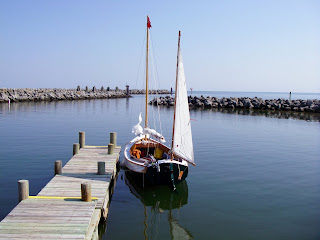 I'll be thinking of the folks on the OBX 130 over the next week. I know a few of them (but only through email). Bill, Chuck and Dave - have a great trip. Stay safe and enjoy it.
steve
Posted by Steve at 9:17 PM

Cool Pics... Thunderstorm must have been hairy. Bit more work done on my boat today. Pics to follow

Thanks Steve, Wish you could be with us! Dave