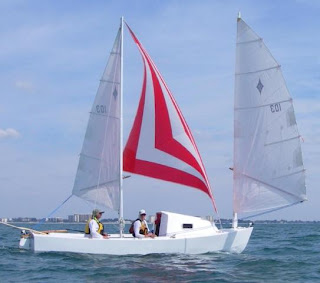 Bruce and I are doing a little something different on the sail in June. We'll have some company! We'll be joined, for at least part of the trip, by the crew of Dawn Patrol. That is them below, Paul, aka Dances with SandyBottom, and Dawn, SandyBottom Kayaker. 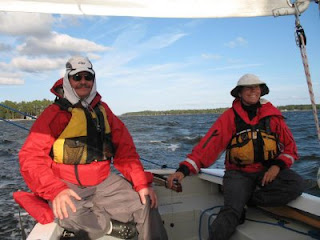 What does "sailing together" mean? We are not really sure.
We started talking about this trip last November when I met Paul and Dawn in nearby Hampton (more on that below). They had been looking at this blog for a while and I had been following Dawn's blog for a couple of years. We had some interests in common and we all love coastal North Carolina. We decided to share a trip and see what happens.
Paul's suggestion was that Bruce and I plan our trip as if we were on our own. The Dawn Patrol crew would watch the plan develop and then join in for part or maybe all of the trip. We'll start together, spend the first night in the same anchorage (Spartina has already invited Dawn Patrol over for dinner on the first night out), and then we'll see what happens from there. I expect we may sail within sight of each other a couple of days, anchor nearby a couple of nights, branch off from each other at times and maybe reconnect at towns - Oriental or Beaufort - along the way. 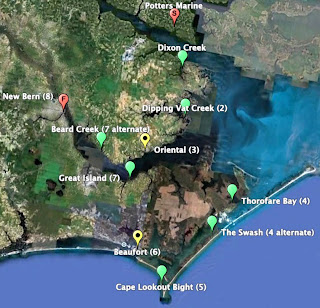 Our boats have slightly different capabilities. Dawn Patrol is a Graham Byrnes designed Core Sound 20. I've heard the design is very fast and she may well out pace us (especially if she is flying that third sail - a fisherman??- that you see in the photo below). I really don't know what to expect in that area. Another difference is that Spartina has a 3.5 hp outboard engine, Dawn Patrol's backup power is a couple of long sweeps - Paul prefers to row. It may be on day four that our paths diverge and Bruce and I head east from Oriental and transit a couple of canals behind Cedar Island on our way to Core Sound. The canals, particularly with wind on the nose, might be tough for Dawn Patrol and they may choose to head elsewhere. If so, I do hope we reconnect at another point on the trip.
We are starting this trip with no expectations for the other boat. We'll just see what happens and, I'm sure, have a good time. 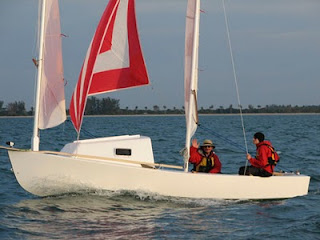 I had been exchanging emails with both Paul and Dawn for a while when I finally got to meet them in person last November. They had come up to nearby Hampton to say goodbye to their son Alan as he set off on Eye of the World sailing circumnavigation. What an adventurous family. Dawn had done several Everglades Challenge Races, a Florida Ultimate Challenge, a month long expedition in Newfoundland and several other races or expeditions. Just since I met her in November she has paddled the Georgia Coast, done an EC Challenge, explored the western shore of Pamlico Sound (some of the same territory I sailed on the walkabout) and kayaked from Ocracoke to Roanoke Island.
On the web I also watched Paul and his son Alan build Dawn Patrol and then race it on an Everglades Challenge. And now Alan is off on a round the world sailing trip. These folks will have some stories to tell. I'll look forward to hearing some of them on our June trip. 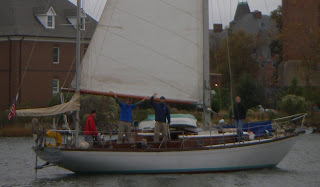 Dawn, below, is most comfortable in a kayak but she has been training for a while now on a sailboat. It will be interesting to see how she adapts her on the water skills and experience to traveling under sail. A lot of her journeys have been races. I hope she enjoys the more relaxed pace of a cruise. 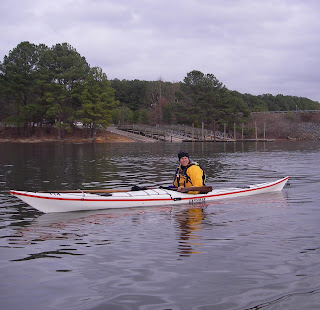 Bruce and I are very excited about sharing at least part of the journey with them. It will be a great chance to learn, compare boats, share our experiences. I expect we'll sail together at times, sail apart at other times times. We'll keep in touch by vhf radio and cell phones, and also use our smart phones (when we get a good signal) to watch each other's SPOT track.
Every cruise that Bruce and I have made has been different. And they have all been a lot of fun. Making this trip with Paul and Dawn will add a new wrinkle to the adventure. I can't wait to see how it works out. 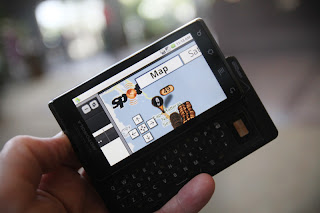 On another note, I'm sure you heard that Art Linkletter passed away yesterday. 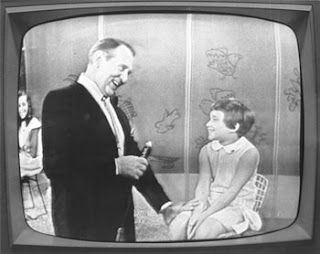 My wife got to spend some time with Mr. Linkletter when he came through town a few years ago. He told her a story about the time he visited a nursing home. Most of the residents had probably been parents of young children in the 60's and watched him on black and white tv's in their living rooms. He sat down next to a woman at the nursing home. "Do you know who I am? he asked her. She paused, looked at him and said "No, but if you ask the lady at the nurse's station she can probably tell you."

I was sorry to see his obituary in the paper, but at the same time I remembered the story and had to smile.

Steve - I think this is a great opportunity for you to try out a fisherman staysail on Spartina. I've often wondered about rigging one up once I'm done building -- seems like it could work. Imagine the downwind sail area!

Seth
considered the same idea but came to the conclusion that it would not work. The mizzen mast is both unstayed and a little flexible. I think the reason for that is to make is self-tending. It will spill the extra wind and keep the boat balanced. To fly the fisherman would at the minimum require stays and even then I'm not sure it would be strong enough to handle 100+ square feet of sail (30 for the mizzen and 70 or more for the fisherman.
I think for downwind sailing a large foresail would be best. But that is just a guess.

On the CS20 "Dawn Patrol" we could also fly our spinnaker (even simultaneously with my stays'l) if I installed the optional bowsprit, if we had a spinnaker. ;)

The stays'l halyard serves as a backstay --which is possible because the mizzen is forward of the transom.

Okay, then I'll say something about Art Linkletter. What a gem.
Definitely one of my favorite shows when I was a kid. Our kids have no idea how great, and wholesome, his show was. Don't get me started about the crap on TV these days. I've already said too much. Where have you gone, Art Linkletter? A nation turns its lonely eyes to you.

Baydog, I'm with you on your tv opinions. Maybe we can talk about it sometime when we meet for the "senior special" dinner (4 pm) at Shoney's.