Spartina stayed in the garage today with a forecast of rain and severe thunderstorms. Good choice for once, the thunder started a little after 11 a.m., heavy rain and then lightning soon followed. It was a day to get chores around the house, maybe get ahead of the curve and hope for good weather next weekend. 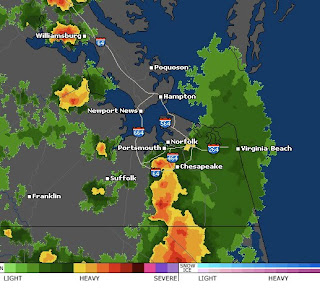 While I'm staying dry there are a couple of good trips worth following, one going on right now and one starting, I think, tomorrow.
SandyBottom Kayaker is in a group of kayakers paddling from Ocracoke Island, one of my favorite places, to Manteo, another favorite place, on Roanoke Island. They will be paddling on Pamlico Sound just inside of the Outer Banks. She published her tracking page on her blog so I don't think she'll mind if I post it here. And it looks like her husband Paul, aka Dances with SandyBottom, is updating her blog as she goes. It will be worth tuning in there. That is a photo of Dawn below from an EC trip. 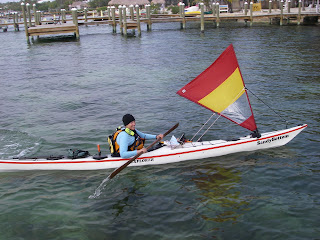 Today, on their first full day of paddling they crossed Hatteras Inlet, the opening between Ocracoke Island at left to Hatteras Island at the right. The currents in there can be treacherous but I'm sure this experienced group of kayakers timed it just right, it looks from the SPOT track that they made it through just fine. It is a beautiful area with blue green water, tiny islands with white sand and several shoals.
(A quick side note --- I first read about paddling a small boat across Hatteras Inlet in Nathaniel Bishop's Voyage of the Paper Canoe published in 1878. It is a great read, as are his other books. Project Gutenberg has put Voyage of The Paper Canoe on line. For those interested I've pasted his description of his crossing of Hatteras Inlet at the bottom of this post.) 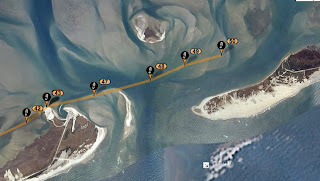 Below is a photograph I shot of the inlet last summer on the way down to Ocracoke in a small plane. The northern tip of Ocracoke is at the right in this photo. You can see how the currents have carved out the shoals. I wonder what it looks like from water level (a kayak).
I have crossed the inlet dozens of times over the years on the ferry, Bruce and came back across the inlet on the ferry in 2007 on the way home from the SkeeterBeater. That was beautiful evening. We've published those photos before, you can see them here. 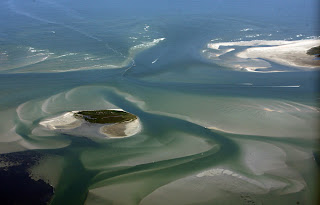 I think the paddle to Manteo will go through Friday. I'll look forward to see the photos and reports.
Just about 20 miles southwest of Ocracoke the captains of the OBX130 are meeting sometime today. The sail, down Core Sound to Cape Lookout Bight, Shackleford Banks and back up Core Sound, starts tomorrow.

One of the particpants in Chuck of Duckworks Magazine. He is sailing with Bill Moffitt, one of the organizers, aboard Bill's Mikesboat. Below is a photo from the exploratory trip they did last summer while planning this year's event. Again, I can't wait to read there stories. It looks like Chuck will be reporting in during the trip here.
So I'm not on the water, but it is good to see that some other folks are out there. Hopefully I'll get out for a few more day sails in the next couple of weeks. The the June cruise is less than four weeks away.
steve 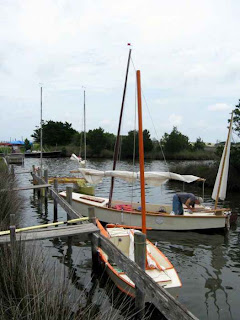