Started laying out the gear on the garage floor next to the boat this afternoon. 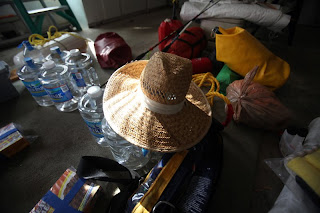 It may not look like it but the food and equipment are set out in the shape of Spartina (below), foredeck gear up forward, items that go in to the thwarts in the middle and so on.
I put fresh batteries in the SPOT and GPS. While checking batteries in my eight-year-old Icom marine VHF radio I found that it no longer worked. I had used it as recently as three weeks ago but now all I get is static. I could pick up a weather station but it was very faint at best. Looks like I'll be buying a new radio tomorrow before I leave. I really had not budgeted for it, but I would not go out on the Sound without a good weather radio. Nor would I day sail on the Elizabeth River, with all the military and commercial traffic, without a radio to communicate with the tugs, barges and colliers. So if I want to sail I need to get a new radio. 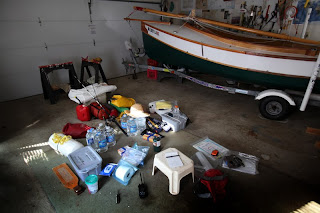 I did receive a note from SandyBottom about the prohibited area off of Sow Island. She said she went around the point, along with other boats, sticking close to shore. That would save me a lot of sailing. I searched the web and found the regulation below. While it does say that the area is closed to navigation it also says that vessels in the area will be asked to leave during operations - sort of a backhanded acknowledgement that boats might transit the area. So maybe it is not a 100 percent prohibition. If there are operations (bombing practice) I'll bypass the area. But if things are quiet I might sneak around the point - at most it would be skirting the edge of the area for about a mile. 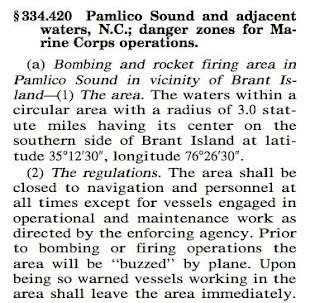 Below is the target in the middle of the bombing area. It looks like a ship or maybe two sitting out on Brant Island Shoal. 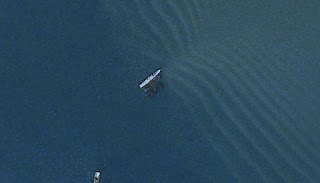 Dawn had some more information about the canals (or ditches) in the area. Below is what appears on the charts to be a canal (going from top to bottom) that connects Middle Bay with Jones Bay. But a closer look on google earth shows that it is not a continuous waterway. 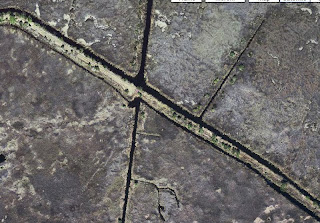 There are a couple of other canals that go from the Jones Bay to the Bay River. If I get down that far south I might take a look at them for the June trip. Dawn, thanks for the information.
steve
Posted by Steve at 8:17 PM

Good luck on your trip, Steve. Looking forward to hearing all about it.