Nice, sunny and windy today for a sail down the Elizabeth River to the James River and back. Cruised through Crawford Bay first thing and found Arden, an Aries 32 (I think) still anchored there. I talked to the owner on a sail a couple of weeks ago. He has some work to do on her and then plans to sail south in the fall. Bahamas anyone? 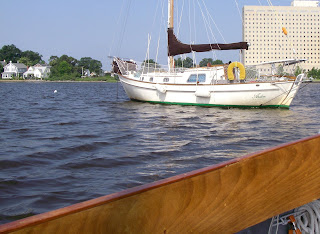 It was breezy enough, wind out of the southwest in our typical summer pattern, that I tied in a reef as I rigged the boat. I thought the wind would die down eventually but it never did. I kept the reef in there the entire time. There you can see the reef point outhaul tied in at the end of the boom. In the background is a collier being nudged up against the coal pier. Lots of commercial traffic on the river today. 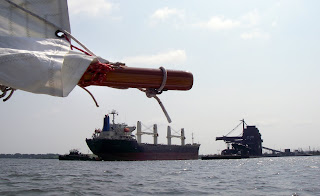 Even with that reef I was heeled over for most of the day. Very fun and comfortable. 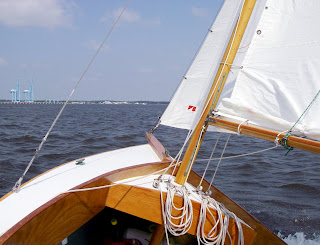 And below is a classic yawl I crossed paths with where the Elizabeth empties into the James River. I had talked to her owner a couple of years ago, she is a classic from the mid-50's, built by one of those famous boatyards in the northeast (but I can't remember which one right now). She is kept in mint condition. I'm sure when the owner saw me he was very happy to know he had the second nicest yawl on the river today..... 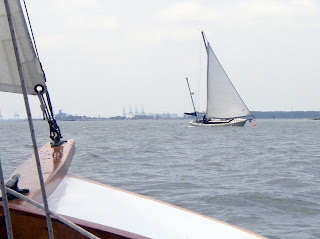 Still taking care of odds and ends. Finished creating my waypoints and importing them on to my old Legend Etrex gps. You can see from the screen shot below that the mapping technology from just a few years ago was (and on my gps, still is) very crude. I was having some computer issues and ended up marking the waypoints in google earth then copy and pasting to my gps's MapSource software. Now that I look I see I misspelled the names of some locations. But it will get me where I need to go. And once imported on Bruce's much newer gps we'll be able to see the waypoints on the nice Blue Water charts (or whatever it is called). It should work out just fine.
steve 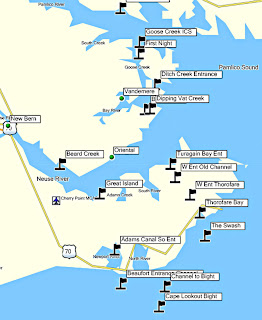 I love the graceful lines of those classic old designs. The glory days. When I was a teenager I would zig-zag all over a marina to find one, then study it intently until someone seemed to think I looked suspicious.

to input my routes and waypoints I use a free program called SeaClear II. It uses free NOAA Raster charts (http://www.nauticalcharts.noaa.gov/staff/charts.htm) that are the digital copies of paper charts. To upload and download to Garmin GPS it has a associated program called g7towin. My main benefit of SeaClear is that I print sections of charts to a file. Take the JPG into Word and add compass rose and other navigational details. Then I print two sided, with Google Earth of the same area on the reverse side, laminate with stick on clear sheets and I have a 9x11" miniature chart. Maybe I will post the process on my Blog. Good sailing...

Barry,
you might be right on the yawl. It had really classic lines.
How are the boats? Saw you had an interesting time with steam bending of wood.

Paul,
did not realize we had an EC'r in the area. Good luck on the NC Challenge. I'll give your waypoint method a try for the fall sail. I had tried marking my points on google earth, outputting that file then converting to gps waypoints with an online converter. It never seemed to work quite right. I do need to update my computer and hopefully this winter I'll update my gps.

The boats are going great, just slow. Each step closer to the end seems to take longer than the last. I guess that's typical. Feels like I'm on the last long tack toward home, hoping the wind holds.

The "steam" bending was fun, though, I must admit.