It has, as the writer says in the opening paragraphs, all the elements of a fable. A victorian house that seemed to float on the water. Poignant words on a young girl's headstone in a marshy cemetery. And a man who battled the rising water. 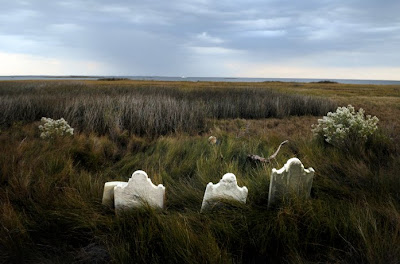 The story, written by David A. Fahrenthold, was on the front page of Monday's Washington Post, accompanied by beautiful photographs by Astrid Riecken.
It is the story of the long-gone village on Holland Island on the edge of Tangier Sound, the same story that played out on many islands in Chesapeake Bay in early 1900's. Hundreds of people - waterman, farmers and their families - lived in thriving communities on these islands. 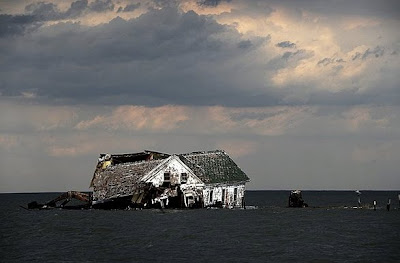 On Holland Island, like many of the other islands, the water began to rise. The island began to disappear. And the people left. Most of the houses, save for the two-story victorian, were dismantled and moved off the island. And the water kept rising, covering the land until the house seemed to float on the bay.
A former minister who had known of Holland Island since his childhood found the headstone of the young girl in the cemetery reading "Forget me not, is all I ask." He became obsessed with the island, bought it and tried to save that last remaining house. Nothing worked. Timbers, piles of rocks, hundreds of sandbags. The water could not be stopped. And now the last house on Holland Island is collapsing into the water.
It is a fascinating story, read it if you get the chance.
steve 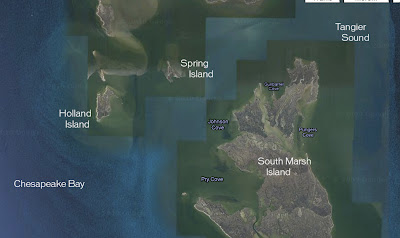 Wow, what an interesting and wistful story! It's always amazing to see the millions of interesting, untold stories such as those.

Did you see the house when you were sailing in that vicinity?

No, I sailed on the east side of South Marsh Island, never in sight of Holland Island. But I hope to pass by Holland Is. and the other small islands next year.
steve